Automotive shock absorbers are an integral part of a vehicle’s suspension as they reduce the shocks on the vehicle produced by a rough road surface and provide driving comfort. Globally, increasing automobile demand and production along with rising awareness of vehicle safety is expected to drive demand for automotive shock absorbers.

Hydraulic shock absorbers are generally used in vehicles as they are economical as compared to gas-filled shock absorbers. For shock absorbers, passenger cars, which include compact, mid-size, luxury, and SUVs hold the highest market share.

Improvement in the quality of automotive components is also an important growth factor for the market. Also, evaluation of technical issues in suspension systems and quick replacement of shock absorbers have gained momentum in the past few years.

Technological advancements in the manufacturing of automotive shock absorbers are accelerating growth of the market. Audi has a prototype in which electromagnetic dampers replace the hydraulic suspension systems used today, which gives a more comfortable ride.

Current shock absorbers induce kinetic energy in the car at every bump or pothole, and this kinetic energy is lost in the form of heat. Electromechanical damper systems do not waste this energy, which is used in the electrical system of vehicles. Thus, all the mentioned factors will accelerate demand for shock absorbers, which will increase with growing number of vehicles over the coming years.

According to Persistence Market Research’s analysis, automotive shock absorber sales have grown at 4.2% CAGR from 2016 and 2020.

The COVID-19 pandemic has severely impacted the global economy at numerous stages, and the effect is seen on the vehicle industry as well. Production and supply chain operations have suffered on a large scale due to closing of all manufacturing factories as a result of the current COVID-19 pandemic, but demand will increase as economies pull through after the pandemic's containment era.

With a number of end users affected in regions such as North America, East Asia, and Asia Pacific, supply and shortage in demand are projected to result in a major drop in Y-O-Y growth. Yet, Persistence Market Research expects the global automotive shock absorbers market to expand at over 5% CAGR through 2031.

Which Factors are Driving Sales of Automotive Shock Absorbers?

Leading manufacturers are implementing innovative production technologies and techniques to eliminate operational issues and provide end users with high-quality shock absorbers. Growing demand for shock absorbers for use in electric vehicles is creating numerous opportunities for manufacturers and suppliers. Increase in demand for luxury vehicles is also a growth factor for the market.

Increasing urbanization and smart cities, and rising daily commuting distances, are some important factors driving demand for new vehicles, indirectly impacting the growth of the automotive shock absorbers market in a positive way. 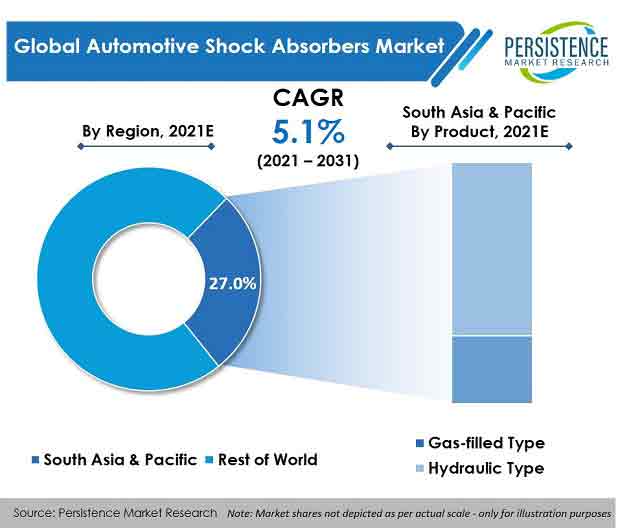 How Large is the Opportunity in the U.S. for Automotive Shock Absorber Manufacturers?

Persistence Market Research has estimated the U.S. to remain one of the most rewarding markets throughout the course of the projection period. One of the key factors is growing vehicle numbers and aftermarket for shock absorbers due to increase in vehicle miles travelled in the country.

Germany has many leading OEMs as well as aftermarket part providers. To cater to growing demand for vehicles, shock absorber manufactures are increasing their production volumes day by day. Increase in vehicle age and rising awareness of vehicle safety features have resulted in increase in early replacement of shock absorbers in the country, giving boost to the aftermarket. Also, major technological advancements such as evolution of electrical generator suspensions are accelerating market growth in Germany.

What’s the Outlook of Automotive Shock Absorbers in India?

India has a prominent growth rate in the South Asia & Pacific in the two wheelers segment. Bad condition of the roads in the country is increasing aftermarket demand for shock absorbers, which is a major growth driver for the market. With increase in the number of both, personal and commercial vehicles in India, demand for shock absorbers is also increasing, which has led to promising growth forecasts for the market in the country for the forecast period.

Is China a Lucrative market for Automotive Shock Absorbers?

How are GCC Countries Faring in the Automotive Shock Absorbers Landscape?

GCC countries such as Saudi Arabia, the United Arab Emirates, and Kuwait reported 696,542 units of new vehicles sales in 2020. GCC countries will create significant opportunities for automobile manufactures with increasing demand for luxury and SUVs in the region, which, in turn, creates significant opportunities for manufacturers of automotive shock absorbers in the Middle East & Africa region.

Which Vehicle Type is Expected to Experience the highest CAGR for Automotive Shock Absorbers?

The two wheelers segment is projected to experience significant CAGR regarding the use of automotive shock absorbers. Over the forecast period, the segment is estimated to grow at a steady rate in terms of both, value and volume. Rising emphasis on electric and hybrid vehicles will create key opportunities for manufacturers. Companies such as KYB Corporation, Tenneco Inc., ZF Friedrichshafen AG, and Hitachi Automotive Systems are providing automotive shock absorbers for distinct vehicle types with various designs for greater efficiency.

What is the Most Used Design in Automotive Shock Absorbers?

Which Sales Channel is Preferred for Automotive Shock Absorbers?

The market is highly competitive, with the presence of a large number of players offering cost-competitive automotive shock absorbers. To meet the requirement of increasing vehicle production and parc, manufacturers are forming strategic partnerships with OEMs and regional distributors. Brand consciousness and aggressive marketing make it challenging for new entrants in this space. Furthermore, launch of online distribution platforms is projected to increase demand for shock absorbers.