The mass transportation systems have been undergoing a sea change in terms of safety ideas and initiatives, given that public safety has made its way to the pinnacle of government responsibilities. With both governments as well as common masses voicing the need for safety systems, platform screen doors have been gaining massive popularity across fast-growing metropolitan cities.

Risk minimization in public transport spaces has always been a long-term goal for governments across various economies, and will always continue as a focal-point. As platform accidents have always been a key concern injuring and killing millions, the necessity of effective systems for safe loading and unloading of passengers continued vexing minds of governments and common masses alike from the last ‘n’ number of years. One of the initial solutions was this ‘mind the gap’ warnings in both audio and visual formats, and staircases helping passengers with safe boarding joined the fray.

Platform screen doors marked a full-stop to these conventional tactics and were highly acknowledged for their unmatched effectiveness. Sensing the growing penetration of platform screen doors in the recent years, which is likely to further scale upwards in the near future, Persistence Market Research (PMR) offers an extensive investigation into this evolving landscape. 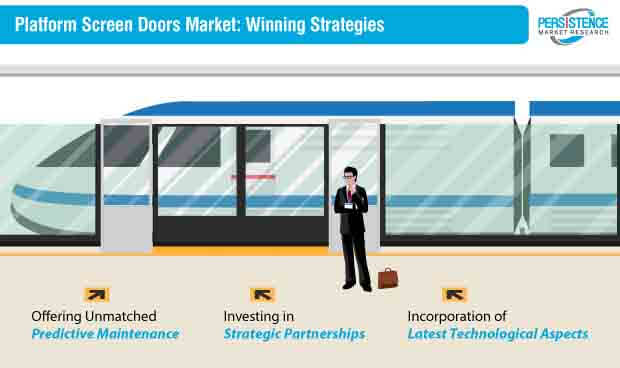 Companies operating in the platform screen doors are vying to crack the innovation code, which would make their product stand out in the competitive space. One of such innovations is the launch of digital monitors affixed on the screens, which again is for advertising their products and reaping sizeable benefits out of it.

Production Oscillation between ‘Standard’ to ‘Custom-Made’ 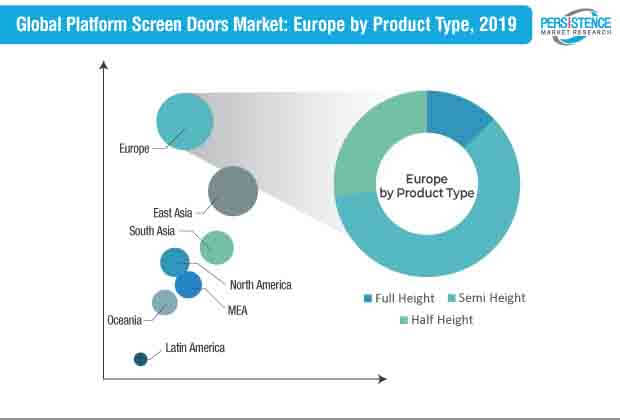 Manufacturers are eyeing major opportunities brimming in Europe and Asia, given that Europe and Asia are witnessing extensive deployment of platform screen doors in the past few years. Integration of high-intensity sensors and alarms remains a key focal point for the manufacturers of platform screen doors market, for the fact that these inclusions would play a pivotal role in fixing product incompetency. Heavy dependence on local markets will prove to be a key bottleneck for manufacturers, primarily for the ones endeavouring geographical expansion.

command nearly 50-60% of the global market share via strong value propositions. The market partakers are focusing on the right balance of R&D for new innovations, seamless delivery of products, effective marketing & promotions, and long-term contracts with end users. In addition, key players are also focusing on acquisitions and takeovers to further expand their sphere of influence.

These doors are installed for passenger security purposes, as they only open when the metro train stops at the station. Moreover, a single unit of platform screen door comprises of two digital displays and two emergency exit doors, which can be operated manually. In this global study, PMR has assumed that platform screen doors are installed only on one side of a metro train platform.

In the global market, Latin America is anticipated to hold a share of ~ 1% throughout the forecast period because of the inadequacy of automated metro train networks, which is expected to significantly boost the global platform screen doors market over the next ten years. Saudi Arabia, Australia, and Russia are considered as emerging countries in the global platform screen doors market owing to the rising adoption rate of driverless metro train networks over the coming years.

PMR’s research study on global platform screen doors market offers a detailed market taxonomy, wherein the key segments have been discussed in detail. The segmentation of the platform screen doors market has been offered on the basis of platform, product type, and station type. Every segment has been analyzed in detail and data pertaining to growth of each segment has been included in the study.

The research study on platform screens market offers inclusive insights about growth of the market in the most comprehensible manner for better understanding of users. The insights offered in platform screen doors answer some of the most salient questions that assist the stakeholders gauge all the emerging possibilities.

A unique and promising research methodology forms the base of platform screen doors market during the forecast period. The report has been prepared after a comprehensive analysis of the market happenings and then riveting insights have been compiled meticulously. The research methodology for platform screen doors market has been is a two-step process comprising of primary and secondary research. Key stakeholders, including platform screen doors manufacturers, suppliers, and distributors have been interviewed and experts of several designations, including executive vice presidents, directors, service engineers, technical advisor, GM marketing professionals, and sales professionals.