According to WHO (World Health Organization), in 2016, more than 1.9 billion adults aged more than 18 years were overweight. Most of the world's population lives in countries where overweight issues and obesity kills more people than underweight issues. The intake of high-fat content food products and a decrease in physical activity due to the increasingly sedentary nature of many forms of work are the fundamental causes of a rise in the rate of obesity around the globe. As a result, consumers are now being conscious on the type of food that they are consuming, and are simultaneously taking the necessary steps on cutting down on the unnecessary intake of fat content and high calorie content food products in their regular diet. Consumer are now adopting a reduced intake of meat products, and are seeking health benefits due to the consumption of plant-based meat products. Plant-based meat product promotes several health benefits such better heart health, improved gut health and weight management.

Plant-based Meat Products Considered as a Lucrative Nexus of Both, Health and Ethical Consumerism

Over the past couple of years, global Internet penetration has been surging year-on-year, providing easy accessibility for the consumers regarding any information and awareness on any sector. Internet penetration has been an influential factor contributing to the growth of plant-based meat products in terms of value sales. Consumers are becoming more and more aware on the health benefits associated with the consumption of various healthy foods such as plant-based meat products through various social media channels. Through these online channels, there is growing awareness on animal cruelty and health issues, which have an adverse effect on the buying decisions of consumers, especially in developed regions such as North America and Europe. Owing to these factors, plant-based meat products enjoy a status of a lucrative intersection between these changing social dynamics.

In 2012, the vegan population accounted for around 25.6% of the global population. Among the vegan population, tofu is perceived to be the most similar plant-based meat product, and consequently, other soy food products like tempeh are also gaining popularity due to its texture, chewiness, and sensory attributes in plant based meat product segment. Plant-based meat products like tempeh and tofu also offer an economic benefit, right from the agricultural to the commercial class in countries like China and South East Asia, where it is also produced as a means of earning a livelihood. 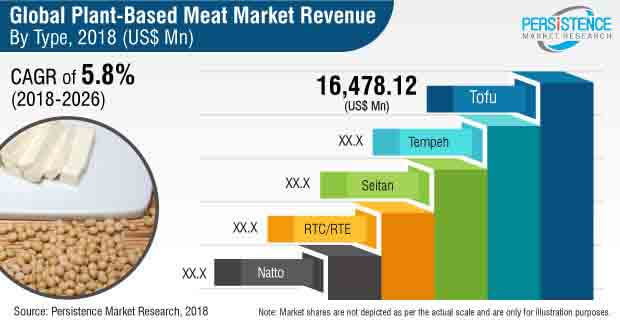 The demand for tempeh and other plant-based meat products is slowly outpacing the supply of soybeans, which is the major raw material. Therefore, manufacturers are turning to native ingredients such as lupines to produce plant-based products like tempeh. An increasing number of lupine tempeh and other multigrain tempeh incorporated with lupines are emerging on retail shelves. Major lupine processors are very passionate about the advancements in the lupine industry. They have successfully marketed lupines for the production of tempeh in various countries. Tempeh plant based meat consumption is mainly high in Eastern Australia, where soybean production is also high. As lupine is a native pulse of Australia, lupine tempeh is gaining popularity due to the moderate demand for tempeh in Western Australia. Hence this factor provide a critical opportunity for plant-based meat market to gain traction.

A detailed study of the plant-based meat market has provided our analysts with the observation of a shift towards the consumption of plant-based meat over the forecast period. The market is primarily driven by a rise in the demand for healthy food products and increasing vegan population across the globe. In 2012, the vegan population accounted for around 25.6% of the global population. Among them, tofu is perceived to be the most similar alternative for meat, and consequently, other soy food products like tempeh are also gaining popularity, due to its texture, chewiness, and sensory attributes. Soy food products like tempeh and tofu also offer an economic benefit, right from the agricultural to the commercial class in countries like China and South East Asia, where it is also produced as a means of earning a livelihood.

The increasing consumption of unhealthy/ comfort food with high cholesterol has given rise to an alarming state of increasing obese population. Developed countries like the U.S., France, the United Kingdom, and others are facing obesity as one of the chronic disorders among human beings. Government bodies in these nations are taking efforts to make amendments in the food industry regarding the nutrition value content in processed vegetable and meat products. Plant-based meat products are identified as promising ingredients in food products to increase protein content without adding cholesterol. Obesity is expected to become epidemic and challenge the public health sector, as it is increasing in most of the population, from infants to adults. Moreover, cardiovascular diseases linked with obesity, such as diabetes, hypertension, and dyslipidemia, further add as a threat to human health.

Consumers are increasingly shifting their preference towards natural and organic food products, with intense focus on the various health benefits plant-based meat offers. Consumers are inclining towards organically produced goods, and this has been dramatically increasing over the last few decades, owing to health consciousness and increasing awareness. The sales of organic food are expected to continue to show double-digit growth during the forecast period. In fact, the demand for organic food is expanding significantly; consumer demand is exceeding some domestic supplies. According to the Organic Trade Association, in 2016, the U.S. organic food market was valued at US$ 43 Bn, an increase by 8% as compared to the previous year.

According to USDA, the U.S. now spends more than US$ 1 Bn annually to import organic food. Moreover, the ratio of imported to exported products is around 8:1. In the U.S., organic products are now available in around 20,000 natural food stores, and in 3 out of 4 conventional grocery stores.

PMR then determined the volume consumption of plant-based meats across various regions, including North America, Latin America, Europe, Asia Pacific, and Middle East and Africa. Forecasting is done on an internal proprietary model using different macro-economic, industry-based demand driving factors impacting the market and its forecast trends, by identifying and allocating a weighted score to forecast factors that influence the demand for plant-based meats. These factors were the representative of an entire value chain, as well as macro-economic indicators such as production have been taken into consideration to arrive at the volume consumption of plant-based meats in respective countries.

The weighted average selling price for plant-based meats was considered to estimate the market size for top plant-based meat consuming countries. These prices were captured in their respective countries and then converted into USD to offer forecasts in one consistent currency standard.

Given the characteristics of the market, PMR triangulated the data based on supply side, demand side, and dynamics of the global plant-based meat market. To develop the global plant-based meats market forecast, PMR analyzed various factors to understand their respective impact on the target market. However, quantifying the market across the abovementioned segments is more a matter of quantifying expectations and identifying opportunities rather than rationalizing them after the forecast has been completed.

It is imperative to note that, in an ever-fluctuating economy, we not only provide forecasts in terms of CAGR but also analyze on the basis of key parameters, such as year-on-year (Y-o-Y) growth, to understand predictability of the market and identify the right opportunities.

Another key feature of this report is analysis of the global plant-based meat market and the corresponding revenue forecast in terms of absolute dollar opportunity. This is usually overlooked while forecasting the market. However, absolute dollar opportunity is critical in assessing the level of opportunity that a provider can look to achieve, as well as to identify potential resources from a sales perspective in the global plant-based meat market.