The global medical spa market is expected to expand at an impressive CAGR of more than 15% over the next ten years, and be valued at over US$ 116 Bn by 2031-end.

The main goal of a medical spa is to offer medical education and care in a setting that includes spa facilities as well as conventional, complementary, and/or alternative therapies and treatments. Prevalence of skin diseases is constantly on the rise, globally. This is creating a major health burden on most economies. Botox injections, anti-wrinkle and fine line reduction therapies, acne surgery, and fillers are the most up-to-date laser procedures that are conducted at medical spas.

As indicated by the World Health Organization (WHO), skin diseases are among the most widely recognized human wellbeing issues and influence very nearly 1,200 million individuals over the world at some time. The absolute most regular sorts of skin infections detailed all around are pyoderma, scabies, acne, dermatitis, and moles.

In its latest study, Persistence Market Research offers insights about key factors driving demand for medical spas across the globe. Market growth is attributed to many major medical spa actively participating in partnerships, collaborations, and mergers & acquisitions to expand their services.

What is the Future Demand Scenario for Medical Spas?

According to the International Society of Aesthetic Plastic Surgery, there is great demand for minimally invasive treatments such as non-surgical skin tightening and chemical peels, along with tattoo removal and body sculpting. The medical spa trend is becoming very prominent and a lucrative commercial business, as demand for beauty and self-enhancing treatments is rising across the world.

According to International Society of Aesthetic Plastic Surgery, 2019, millennials and the middle-aged generation have the strongest spending power and are more likely to perceive medical spas as an opportunity for ‘digital detox’.

Such factors are expected to create lucrative opportunities for expansion of the medical spa industry size over the forecast period, which is projected to expand at a CAGR of more than 15% over 2021-2031.

Given the consolidation in the market, key players are focusing on mergers and acquisitions to explore lucrative opportunities in the market. Leading service players are also focusing on improving their commercializing efforts following regulatory guidelines. These trends are being actively followed throughout North America, Latin America, Europe, Asia Pacific, and the Middle East & Africa.

What are the Expected Opportunities for Medical Spa Stakeholders?

Opportunities for medical spas will arise by increased marketing and branding to promote services. With this in mind, every med spa concentrates on promoting its brand and raising awareness of medical aesthetic procedures, treatments, and specialist products.

Another factor that will provide lucrative opportunity is increased preference and acceptance of male aesthetics. Men may make up a small percentage of cosmetic customers, but they are becoming an increasingly important part of the medical spa industry. Males are an underserved patient demographic that could help aesthetic practices expand.

What are the Driving Factors for Medical Spa Manufacturers?

One of the main drivers of the medical spa industry is increasing number of minimally invasive procedures, which has been fueled by the ageing population. It has facilitated the creation of new approaches to address the unique anatomy of facial ageing that results in an aged appearance. This trend would encourage more minimally invasive procedures, resulting in increased cosmetic product sales and medical spa services.

Many fashionable innovations are used nowadays in the medical spa space, such as BTL Aesthetics Emsculpt and hydra facial or dermal infusion. Despite the fact that these devices have been at the pinnacle of aesthetics for many years, they top the list due to their broad applicability and extremely high-demand. Technological advancements have improved cosmetic surgery, especially endoscopy, lasers, and ultrasound liposuction. 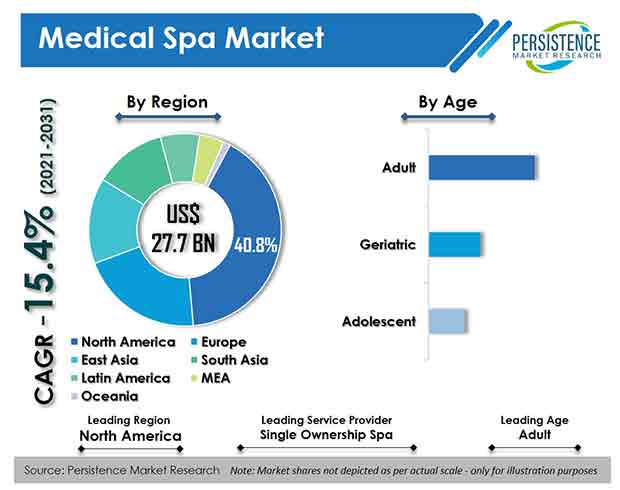 What Makes the U.S. the Largest Market for Medical Spas?

Demand for medical spas is rising in the U.S. due to increasing prevalence of skin diseases and high use of medical spas as a curative measure. The U.S. is majorly focused on branded medical spa service providers interested in launching novel products to maintain compliance with updated regulatory guidelines. Moreover, governmental support for ongoing clinical research has allowed the U.S. to dominate the global medical spa service landscape.

Presence of some prominent players such as Chic la Vie, Dermani Medspa, and other North American companies has created remarkable returns for the country.

Why is Demand for Medical Spas Flourishing in the Germany?

The German health system is a universal multi-layer health system where legal residents of Germany are entitled to have free access to healthcare facilities funded by social security contributions. Today, its doctors, specialists, and facilities make it one of the very best healthcare systems in the world.

Additionally, Germany has introduced a law permitting doctors and physicians to prescribe digital application channels with health benefits, which can be reimbursed by the country’s health insurance system. The market in Germany is expected to reach a valuation of US$ 4 Bn by the end of 2031.

Why is Innovation Key to Succeed in the U.K. Market?

The U.K. healthcare system is a universal and well-renowned system, largely funded by the government. It is one of the most successful healthcare systems in the world. It is not surprising that the U.K. has the second-highest level of spending in Europe. Furthermore, rising research efforts, increasing service providers, and presence of several major players create a huge opportunity for medical spa providers in the country.

Moreover, people are seeking surgeries that are inaccessible in their home countries due to the rarity of their condition and the expertise needed to treat it, expense, lack of health insurance coverage, or long waiting lists. Rapid growth of the wellness tourism market is generating potential growth prospects for novel entrants who deliver a unique convergence of business areas such as spas, fitness travel, and hospitality.

What Factors Make China a Lucrative Market for Medical Spas?

China is the second-largest healthcare market and is rapidly growing based on the two main factors - large-scale capital investments and speedy productivity growth. These two elements project an appealing destination for foreign investments as well large domestic savings.

Since the 1970s, the country has been transforming from being a low economic to a more market-oriented country. China is holding the second position in the global market due to adoption of high amounts of medical spa services and its large-scale manufacturing capacity. The market in China is expected to expand at a CAGR of 17% through 2031.

How Does India Play a Key Role in This Market Space?

India is a densely populated country where the population is mostly comprised of young adults. Rising impact of social media and shifting focus of people toward improving their appearance are ongoing trends. Medical spa demand is likely to grow as the trend of fitness to wellness is substantially becoming important among the Indian population. As such, they seek to have cosmetic surgeries in order to make their appearance much better than before.

According to the report, India generated the highest revenue share among countries in South Asia, and is set to lead the South Asian market over the coming years.

Why is Demand for Facial Injectables Continuously Rising?

Based on service, facial injectables are leading the market and are expected to gain slightly less than half of the revenue share over the forecast period. Growing focus on physical appearance among consumers has led to increased demand for facial injectables in recent years.

Besides, due to being less invasive than surgery, facial injectables target various facial irregularities including wrinkles and fine lines, decrease in volume and contour, and unwanted fat, which is anticipated to spur market growth further.

The medical spa market is greatly consolidated in nature, with the presence of leading players operating in this space. Some of the strategies undertaken by companies are product and service development using novel technology, mergers and acquisitions, outlet expansion, and business investments.

Increasing services and distribution channel network in developing economies and expansion in the value chain of service providers have allowed the market to integrate forward. Moreover, to gain a significant market share, major players provide training programs with quality education to the medical community, and have expanded their training offerings to appeal to a broader audience.

Global Hair Transplant Services Market has an expected market size of over US$ 5,200 Mn by the end of 2025, growing at a CAGR of 7.1% during the forecast period.

Delivery Systems In Personal Care Market report begins with sizing the market in terms of value and volume for the base year, which forms the basis for forecasting.

Global dialysis machines market is expected to exhibit a CAGR of close to 3% over the forecast period (2021-2031).