The global medical footwear market is witnessing steady growth with worldwide revenue up 4.6% year-on-year in 2021. Sales of medical footwear across the world are set to more than double over the next ten years from the current valuation of US$ 9.7 Bn. East Asia holds a notable share in the global market, and is set to be a lucrative market for manufacturers, surging at around 9.2% CAGR through 2031.

Historically, from 2016 to 2020, use of medical footwear increased at around 4.1% CAGR, with the U.S., China, Germany, and U.K. holding significant share in the global landscape.

Medical footwear refers to specially designed footwear that assists in the treatment of various foot-related medical ailments. Arthritis, plantar fasciitis, bunions and hallux valgus, and Achilles tendinitis are just a few of the ailments.

Individuals with flat feet and diabetes can also benefit from this kind of footwear. Increasing physical ailments, sports injury, and muscle pain, as well as medical issues such as foot and ankle injuries, fungal infections, flat feet, and arthritis, have prompted the masses to invest in good-quality medical footwear that provides a cushion to the entire foot while promoting mobility, support, and healthy blood circulation.

Additionally, increasing individual awareness of foot care is predicted to aid increased adoption of these shoes. Rising prevalence of diabetes around the world is also driving market growth, which is projected at 5.4% CAGR through 2031.

Diabetic foot ulcers are caused by improper footwear, which affects around 25% to 30% of diabetic individuals. Wearing unsuitable footwear or walking barefoot, according to The International Working Group on Diabetic Foot, are primary causes of foot trauma leading to foot ulcers in people with diabetes and insensate feet.

Use of medical footwear has increased as consumers become more aware of the need of limiting joint movement, enhancing foot stability, and lowering discomfort, which is favorably benefiting medical footwear manufacturers around the world.

Patients with medical disorders such as diabetes are also among the most frequent users of therapeutic footwear to repair the ankles and foot. In these individuals, poorly regulated blood sugar can harm many sections of the body, including the nerves and capillaries that lead to the feet, making them more prone to foot problems and a disease known as neuropathy.

Medical footwear is a type of shoe that is specifically intended to reduce risk and enhance healthy blood circulation, mobility, and foot support. 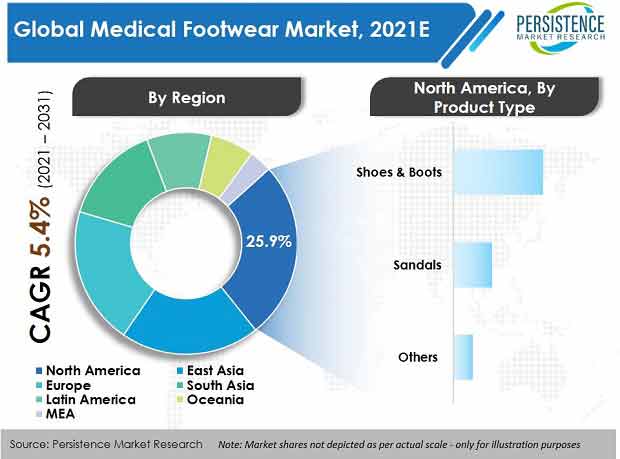 How are Technological Advancements in Medical Footwear Aiding Market Progress?

With growth of the footwear industry, medicated footwear has seen a number of changes and enhancements. Manufacturers are concentrating their efforts on creating more advanced medical footwear.

Watts Footwear, for example, specializes in the manufacture of unique shoes for use in hygiene-critical situations. Watts Footwear creates medical shoes and clogs that are both, comfortable and sanitary.

They come in distinct women's and men's models with four different detachable insoles and are composed of flexible, lightweight material. This means that they fit every foot exactly and are extremely pleasant to walk in, plus they have the Microban® technology, which works around the clock to prevent hazardous bacteria from growing on the shoe's surface.

This proactive product protection has been shown to be effective against S. aureus and E. coli, reducing the danger of cross-contamination in hospitals, doctors' offices, and other hygiene-sensitive healthcare settings. The always-active technology also keeps the footwear cleaner between cleanings and allows for washing at lower, more energy-efficient temperature.

Will Growth of Affluent Aging Population in the United States Drive Product Adoption?

The market in the U.S. is expected to progress at a CAGR of around 2.4%. According to Orthopedic Associates, 75 % of Americans will have foot problems at some point in their life. Plantar fasciitis (heel discomfort) affects over 2 million Americans each year. Women suffer from four times the number of foot ailments as men. Part of the issue can be attributed to high heels.

Furthermore, as the population of the United States ages, the number of persons suffering from diseases such as dementia, high blood pressure, bodily aches, stiffness, diabetes, and osteoarthritis has increased. Foot problems are far more common in the elderly, obese persons, women, and those with diabetes, cardiac disease, osteoporosis, or knee, hip, or back discomfort. Pain in the toes and ball of the foot is far more common in women than in men, and it worsens as they become older.

Medical footwear will help reduce the occurrence of the disorders listed above, which will increase market reach.

Is Growing Health Issues Such as Diabetics Driving Medical Footwear Sales in Germany?

In 2020, Germany accounted for 25.4% share in the European market for medical footwear, and is expected to grow at a rapid rate.

In 2019, the International Diabetes Federation (IDF) predicted that 59 million adults (20-79 years) in the IDF Europe region had diabetes. The region has the most children and adolescents (0-19 years) with type 1 diabetes, with a total of 296,500. While Germany is one of the 57 nations in the IDF EUR zone, diabetes affects 463 million people worldwide, including more than 59 million in the EUR region, with a projected increase to 68 million by 2045.

Increasing number of diabetic patients in the country is predicted to drive demand for medical footwear.

Why is Demand for Medical Footwear Increasing in China?

East Asia accounted for 19.5% revenue share in the global market in 2020, with China being the largest revenue contributor to the market in the region.

Early adoption of modern technology, strong presence of key players, and rising fitness and wellness concerns are some of the key drivers for the market's revenue growth in the country.

Furthermore, China's growing diabetic population is likely to drive demand for medical footwear. China's diabetes prevalence has risen to 10.9 percent, according to the International Diabetes Federation.

Diabetes affected an estimated 116 million Chinese individuals in 2019, putting them at risk of life-threatening consequences. Over 65 million people out of 116 million are undiagnosed, putting them at a higher risk. Diabetes affects an estimated 463 million adults worldwide, with 163 million in the Western Pacific region alone. Type 2 diabetes accounts for up to 90% of all diabetes cases.

How is the Medical Footwear Market Faring in India?

The Indian market for medical footwear is expected to rise at an impressive rate of 10.2% CAGR.

Consumers are now preferring to purchase footwear with advanced technical fabrications, which provide optimum comfort with a wide choice of quality and styles relief from severe foot troubles. This rise can be ascribed to shifting fashion and aesthetic trends.

Besides, rising consumer health awareness is driving demand for medical footwear such as shoes and slippers, giving the industry a boost in the country.

Why is Demand for Medical Shoes & Boots Key to Revenue Generation?

Medical shoes and boots are typically worn by persons who suffer from severe joint pain or foot pain. Patients with health issues, such as diabetics, are advised to wear these shoes. As the number of diabetic patients worldwide rises, more people are likely to purchase medical shoes and boots.

Which Consumer Group Drives Most Demand for Medical Footwear?

Women's increased participation in outdoor sports such as jogging, climbing, and other adventure activities is projected to increase demand for medical footwear to reduce knee discomfort and injury. Established companies have been concentrating on research & development in order to provide consumers with proper medical footwear.

Why is Online Retail Projected to Register Significant Growth?

As per the analysis, in terms of sales channel, online sales are expected to reflect a high CAGR of 9% during the forecast period.

As a result of the COVID-19 pandemic, consumer preferences have altered, and instead of buying offline, they are flocking to online channels, prompting players to strengthen their online presence in the market.

Furthermore, manufacturers are working to enhance their online presence in an industry where store-based commerce is still prevalent.

Players operating in the market are finding new ways to introduce their products across regions. These measures and efforts are being undertaken due to rising competition. Well-established firms are taking a hard look at their marketing strategies. Collaborations & partnerships and product innovation are having a strong influence on market growth.

Forging new strategic relations with essential players or suppliers to achieve major market presence will be an ongoing trend in this space.

Due to constant product innovation, several key players are offering medical footwear that offer anti-fungal properties. Moreover, some companies are even expanding their product lines.