Sales of dialysis machines in Libya accounted for 2.6% revenue share of the global dialysis equipment market in 2021.

The market for dialysis machines in Libya recorded a high-value CAGR in the last 3 years from 2018 to 2021 owing to the growing prevalence of chronic disease-associated morbidity.

CKD, or chronic kidney disease, denotes varying degrees of renal function decline. The final and most severe stage of CKD is end-stage renal disease (ESRD). It happens when the kidneys are unable to properly carry out their essential functions. Patients must inevitably rely on haemodialysis or kidney transplantation to survive this dysfunction.

The need for a more thorough examination of individuals with CKD and ESRD arises from the significant burden of expensive treatment, pain, and daily challenges faced by patients undergoing haemodialysis. According to the WHO Non-Communicable Diseases Country Profile (2018), cardiovascular disease and diabetes mellitus are the main causes of morbidity and mortality in Libya, both of which are risk factors for CKD.

Although there are many ESRD treatment centers in the country, and the government has made more of an attempt to support those who need it, recent epidemiological studies have not been conducted on a national scale to assess the characteristics and distribution of fundamental etiologies related to ESRD among patients undergoing haemodialysis.

The primary treatment for ESRD is generally acknowledged to be kidney transplantation. However, there are several challenges that organ donation programs face, including access issues as well as ethical, religious, and moral concerns. Due to ongoing political unrest in Libya, organ transplantation programs have been hampered, which has made the already problematic access and availability much worse.

To prevent those at risk from developing ESRD, more efforts and resources must be focused on locating and addressing CKD causes. Early research from 2016 indicates that more than one-third of ESRD cases in Africa are hypertensive and diabetic patients. Although there are significant socioeconomic disparities and better health services in Libya, this situation is probably the same there. 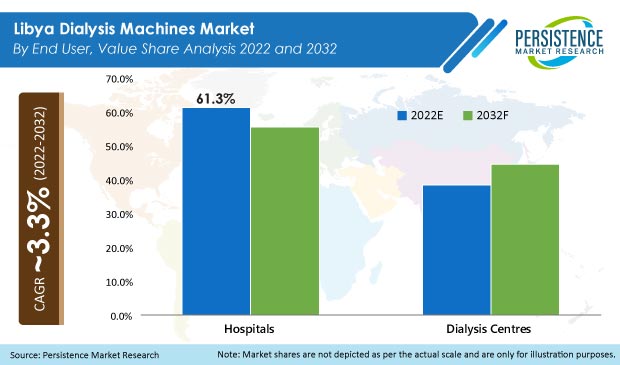 What are the Opportunities for Dialysis Machine Manufacturers in Libya?

“Growing Outreach of Dialysis Equipment in the Country”

Due to hepatic cirrhosis and hepatocellular carcinoma, chronic infections with the hepatitis B virus (HBV) and hepatitis C virus (HCV) virus are linked to substantial health hazards. In comparison to the general population, patients receiving maintenance haemodialysis are more likely to contract HBV and HCV in Libya.

In many nations, the frequency of new HCV infections among haemodialysis patients has been drastically decreased through the implementation of blood donor screening and a decrease in blood transfusions because of the availability of recombinant erythropoietin.

Manufacturers of dialysis machines are thus presented with lucrative opportunities to enhance their outreach across nations such as Libya as well as to promote the accessibility of medical devices for enhanced treatment outcomes.

Why is the Libyan Market for Dialysis Machines Unable to Reach its Full Potential?

“Civil Conflicts, Lack of Resources, and Dearth of Skilled Professionals”

Africa was badly impacted by the coronavirus outbreak, particularly in war-torn nations such as Libya. Several elements have been identified as risk factors for the severity of COVID-19, including old age, existence of other comorbidities, and anomalies in certain laboratory results. It has been noted that patients who need ICU hospitalization have greater rates of mortality and morbidity within the setting.

In a country like Libya that is embroiled in civil conflict, differences in local environments as well as variations in predisposing factors play a significant role in raising mortality and morbidity.

ICUs around the world faced unprecedented difficulties as a result of the COVID-19 pandemic. Due to a lack of resources, equipment shortages, and inadequately qualified healthcare personnel, Africa was badly impacted by the outbreak. In comparison to the rest of the world, Africa has the greatest ICU mortality due to these significant challenges.

Significant lack of healthcare infrastructure and the need for facilities to combat COVID-19 were both reflected in this high percentage, further resulting in a decline of the Libya dialysis machines market.

Why are Haemodialysis Machines Widely Used in Libya?

Haemodialysis machines held around 99.7% share of the Libyan market in 2021. End-stage renal disease is very common in the nation.

Are Hospitals the Best Bet in Libya for Dialysis?

Hospitals accounted for the highest market share of 62.1% in 2021, as end user, in the Libyan market.

With the advent of COVID-19, the prevalence of morbidity associated with the growing chronic disease burden in Libya displayed a rise. To bridge the gap between healthcare service accessibility among providers and payers in the country, the government accessed resources for dialysis equipment from global manufacturers.

With a high prevalence of chronic kidney disease as well as the morbidity associated with infection proliferation due to the COVID-19 pandemic, hospitals were the preferred point of contact to address the concerns of the affected population. As such, the hospitals segment displays and will further display a high market share value in the Libyan market for dialysis equipment.

Manufacturers of dialysis machines have three things in common: they understand the market, choose the best partner, and continue to assist that partner. It is crucial to understand the Libyan competitive context for a product or service, including competitors, standards, regulations, distribution channels, and applications.

Key market players will need to hire a Libyan distributor or build up a local subsidiary to succeed in this market. They will also need to establish a local sales presence.

What valuation did the Libya dialysis machines market reach in 2021?

What is the sales forecast for dialysis machines in Libya?

Sales of dialysis machines in Libya are set to increase at 4% CAGR through 2032.

What is the market outlook for dialysis machines in Libya?

How fast as sales of dialysis machines increasing in hospitals?

Hospitals, as end users, are expected to lead the Libyan market and project a CAGR of 2.9% over the decade.

Who are the top three players in the Libyan dialysis machines market?

Fresenius, Nipro Inc., and Baxter are the top three manufacturers of dialysis machines in Libya.

What is the current scenario of dialysis centers in Libya?

What are the key factors driving the sales of dialysis machines in Libya?

Growing chronic disease epidemiology, need for country-wide assessment of disease burden, and rising rates of infection are the main factors driving the need for dialysis machines in Libya.

What is the outlook for dialysis consumables in Libya?

Demand for dialyzers is expected to surge at 15.2% CAGR over the forecast period.

The global fine medical wire market is slated to expand at a healthy CAGR of more than 6% over the 2020-2030 assessment period..