The Libya passenger car market accounted for 2.9 Mn units in 2020, and is predicted to increase at a volume CAGR of 6.1% to reach passenger car sales of more than 5.5 Mn units by 2031.

The passenger car market in Libya is hugely dominated by imported used cars, with new passenger cars accounting for a tiny share of the market.

From 2016 to 2020, the passenger car fleet in Libya grew at 5% volume CAGR, which slowed due to lack of imports in 2020 due to COVID-19. South Korea, China, Germany, USA, and UAE are top exporters of passenger cars to Libya.

New passenger car models are expected to be launched in the country as a result of these laws, giving buyers additional alternatives to select from. From 2022, the Government of Libya has announced that cars older than ten years will be prohibited from entering the country.

Libya boasts of the world's lowest fuel prices. In some circumstances, the cost of petrol (gas) in Libya is less than the cost of mineral water. Despite the fact that its oil-producing capability was damaged during the Libyan War, the country is working to restore its capacity to produce and sell oil under the provisional governmental authority of the National Transitional Council.

The Libyan oil minister stated that the government expects to reach pre-conflict levels of 1.6 million barrels per day. Increase in production combined with political stability in the country may help keep fuel prices in check, which is expected to boost the country's passenger car sales.

What are the Key Opportunities for Overseas Passenger Car Manufacturers in Libya?

Import restrictions on certain used passenger cars are being imposed in order to boost new passenger motor vehicle sales. Outdoor air pollution has increased mortality rates in Africa by 57% in the last three decades. Motor vehicle pollution has been identified as a major contributor, according to studies.

At least 85% of Africa's vehicle fleet is comprised of secondhand passenger vehicles, some of which are outmoded and equipped with obsolete technology. To combat the problem of rising air pollution, Libya has prohibited secondhand passenger cars older than ten years. This has opened up fresh sales potential for new passenger automobiles in the Libyan market.

What are the Restraints for Growth of the Libya Passenger Car Market?

Libya's roads, where petrol is less expensive than mineral water, are among the most dangerous in the world. Disregard for traffic regulations, crumbling infrastructure, and vehicles that do not meet safety requirements make road accidents in Libya more deadly than violent incidents.

In 2018, the traffic department of the interior ministry documented 4,115 road accidents across the country, killing 2,500 people and injuring over 3,000 others. The number of fatal traffic accidents per capita in Libya is the highest in the world.

According to the Libyan Ministry of Transport, speeding is the leading cause of accidents in the country, which has a population of slightly over 6 million people and more than 4.5 million automobiles. In Libya, road accidents have become silent murderers, claiming numerous lives. As a result, there is apprehension about hiring a private car in Libya. 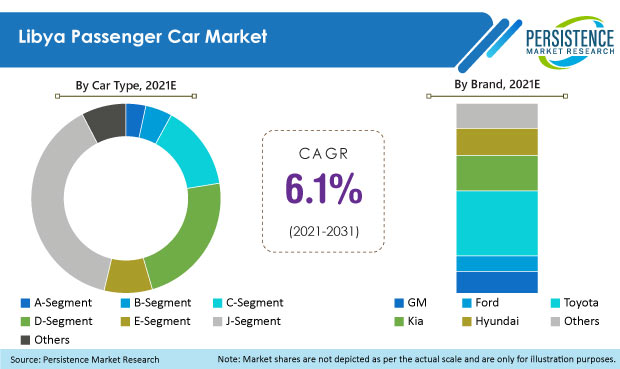 Which is the Most Popular Passenger Car Type in Libya?

With a market share of more than 38%, J-segment passenger cars are the most popular car type in Libya. All types of SUVs are part of this segment.

SUVs are larger and heavier than sedans, giving occupants a sense of security. Furthermore, an SUV's higher ride height offers the driver a considerably better command of the road ahead, making it easier to manoeuvre around traffic or other impediments on or off the road. While a higher ride height and thicker sheet metal may make everyone feel safer, additional driver-assist technologies and airbags are the icing on the cake. This is expected to drive the sales of J-segment passenger cars in the country

Why are Sales of D-Segment Cars Increasing at a Rapid Rate?

D-segment passenger car sales are projected to increase at a volume CAGR of 6.5% during the forecast period of 2021-2031. This segment consists of premium hatchbacks and mid-size sedans, which are becoming very popular in Libya. Cars such as Chevy Optra, which are a part of this segment, are quite popular among the people of Libya.

What Age of Passenger Motor Vehicles is Most Prevalent in Libya?

The above 6 year-old passenger car segment is the most prevalent of the passenger vehicles in Libya with a market share of nearly 75%. This is due to the fact that most of the cars that are sold in Libya are imported 'used passenger cars', which are already pretty old when they get imported into the country.

Also leading to the accumulation of so many old passenger cars in the country is the lack of laws for scrappage of cars after the car turns a particular age.

The COVID-19 pandemic wreaked havoc on the automotive industry in a hurry. Part shipments from China were affected, large-scale manufacturing disruptions took place across Europe, and assembly plants in the United States collapsed. This put a lot of pressure on a sector that was already suffering from a worldwide demand slump, and it will almost surely lead to additional merger and acquisition activities.

Because of supply chain disruptions, fewer secondhand passenger cars from Europe and Asia were imported into Libya, resulting in stunted passenger car sales and a decline in the industry.

With a number of passenger car manufacturers striving for higher market share, the Libyan passenger automobile sector is competitive. To gain a larger portion of the market, major corporations are expanding their operations.

The passenger automobile sector has witnessed a range of expansion strategies employed by market players over the previous few years, including acquisitions, mergers, and collaborations. Industry participants are expanding their product portfolios in order to enhance their revenue share.

What is the market volume for passenger cars in Libya?

What is the predicted growth rate for the Libya passenger car vehicle market from 2021 to 2031?

The passenger car fleet on road in Libya is predicted to increase at a CAGR of around 6.1% in terms of volume from 2021 to 2031.

Which are the top 5 passenger car brands in Libya?

Cars of brands such as Toyota, Kia, Hyundai, GM, and Volkswagen accounted for around 85% of the market volume share in 2020.

Which car type holds the highest market share in Libya?

Which car age is most common in the Libya passenger car industry?

With nearly 75% market share, above 6 years age group of cars is estimated to be most prevalent in the market in Libya.

Which car brand is most popular in Libya?

Toyota is the most popular car brand in Libya. Toyota cars such as RAV4 and Fortuner are quite sought-after among the people of Libya.

Backhoe Loaders Market is estimated to reach a value of over US$ 2 Bn by the end of the assessment period 2017-2026.

As per Persistence Market Research’s revised industry analysis on forklift trucks, the market is witnessing steady growth in 2021 with worldwide revenue up 6.1% year-on-year. Revenue across the world is projected to increase 2X by 2031, reaching nearly US$ 104 Bn..