Global Market Study on LED Lighting Solutions: Indoor Applications Projected to be the Most Attractive Segment During 2017–2025

LED lighting systems are attractive as they are durable, save energy and last longer

LED lamps are energy efficient, possess a long lifetime and have a service life of 50,000 hours or more. They are rugged as they consist of a solid material and do not contain any filament or tube that is fragile. LED lamps require no warm up period and they light instantly in nanoseconds. They are also environmentally friendly as they consume less energy and do not contain mercury or any other hazardous substances. Due to these desirable properties of LED, they are ideal in situations where lamps are required to be switched on and off frequently and can be easily dimmed. As LED lamps do not wash out colors like fluorescent lamps, they are perfect for displays and retail applications as well. Besides, LED lighting has zero UV emissions and they can also run on low voltage power supply. Due to these distinct advantages of LED lighting, the global market for LED lighting is expanding at a fast pace and LED lighting has the potential to revolutionize the lighting sector.

Persistence Market Research analysis reveals that the global LED lighting market was valued at nearly US$ 37,000 Mn in 2017 and is expected to touch a figure of nearly US$ 126,000 Mn by the year 2025, registering a CAGR of 16.6% and exhibiting an increase of 3.4X in terms of revenue during the forecast period.

Due to environmental considerations, governments all across the world are recognizing the advantages of LED lighting systems and are insisting on the implementation of specific standards for lighting products and at the same time restricting the use of incandescent lighting products so that energy can be saved and carbon dioxide emissions can be curbed. Besides, the use of LED lighting leads to an overall cutting of operating costs, and this in turn is driving the growth of the global LED lighting market. To emphasize this trend, reference of the Paris Agreement of December 2015 can be sought, in which more than 190 countries committed to carbon emission cuts of 20% by the year 2020. Also, another pertinent example is of the Chinese government, which banned the use of 100W and 60W incandescent bulbs. Also, on similar lines, the European Union has banned the use of all types of traditional incandescent lighting systems.

Presently, fluorescent lighting technology products have grabbed a relatively high share of the overall lighting market revenue as compared to LED lighting technology products. This is due to the fact that there is a lack of awareness and understanding about the advantages and benefits of LED lighting systems and products. In addition, there is a surge of low-quality and low-cost lighting products mainly from China that have a low lifespan, and there is a misconception that LED lighting solutions are costlier than incandescent or fuel based lighting, and this is especially true of the developing markets in the Asia Pacific and Latin America. These factors are hampering the growth of the global LED lighting market.

Looking at the commercial feasibility of LED lighting technology, it is going to be one of the most promising technologies by the year 2020. This forecast is supported by a dramatic price reduction in LED lighting products, which has made them commercially more viable, and hence has given rise to new market opportunities as this new technology tides over conventional lighting technologies. This opportunity creation is expected to further receive a boost by the green revolution in lighting, which is another trend expected to propel the market northward during the forecast period. In addition, the increasing awareness about energy conservation and rural development in emerging economies such as India and South Africa is expected to further boost the growth of the global LED lighting market to a significant extent in the next five to six years. 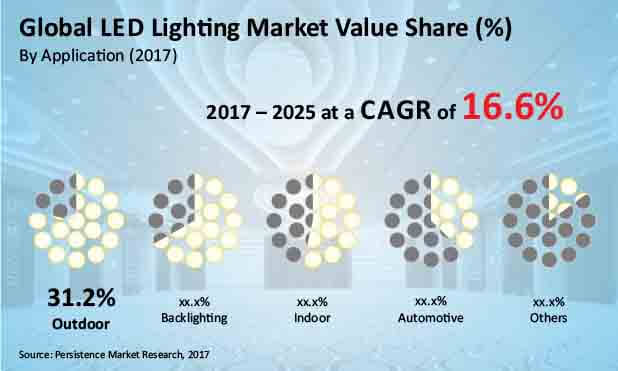 Developing countries and regions such as India and Africa, where there are still millions of people off the grid and without electricity, are expected to represent major growth opportunities as the demand for solar LED lighting systems is high due to various ongoing projects related to rural electrification. To emphasize this point, in September 2015, the government of Kenya launched a US$ 1.2 Bn project to deploy LED street lights in Mombasa City. In addition to this, there are a number of villages in developing countries that lack proper electricity infrastructure and in such areas, demand for solar LED lights is quite high. This presents a huge opportunity in the global LED lighting market and brings to fore the true potential of LED lighting systems lighting up remote areas through solar powered LED lights.

Persistence Market Research has used multiple resources of information and analysis to estimate the market revenue of the global LED lighting market. In order to give the market value projections till 2025 end, Persistence Market Research analysts have first explored LED lighting solutions by product type, services, end user and application. After this, the analysts have done primary and secondary research to arrive at the stated market figures. The secondary research consists of qualitative data gathering through various articles, journals, blogs, industry association data, company websites and other secondary sources. In primary research, discussions with industry experts were carried out. In the data analysis phase, adoption of LED lighting solutions across various industries was considered, along with value chain analysis. A study of the trends in the parent market and end user industry was also carried out and a forecast was developed. This was verified and validated using the triangulation method. Based on this, market insights were derived on which key findings and recommendations of this report are based.