Frozen foods are rapidly gaining acceptance across the globe, boosting the prospects of the global chilled soup market. Manufacturers are racing to cater to this demand by unveiling frozen confectioneries, yogurts and other snacks. A number of companies in the global chilled soup market have come out with fruit-flavored soups to encourage their consumption as a healthy and tasty snack. The companies have positioned drinkable chilled soup as a form of cold press, sweet tasting soup. Consumers seem to have different preferences though, and they seek out vegetable or even savory options in order to reduce their sugar intake.

Retailers offering own brand of chilled soup at their retail outlets

A large percentage of sales in the global chilled soup market is via the organized retail format. With the growth of the global economy, the retail chain has boomed and this has driven the chilled soup market in both developed and emerging economies. Retailers have begun to create their own chilled soup brands with various flavors to support the global chilled soup market growth during the forecast period. Some examples of this include supermarket majors such as Tesco, Sainsbury’s, and Woolworths Ltd. Even Marks and Spencer has three chilled soups sold under its own brand. These are French Onion, Butternut Squash, and Pea & Ham soup. In the U.K., Tesco had more than 3500 outlets distributed across the country in 2015. Tesco alone accounted for almost 1/5th of all grocery sales by value. 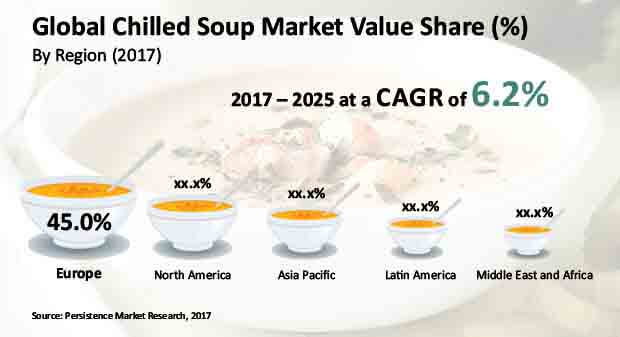 Persistence Market Research has devised a research methodology that stands head and shoulders above its nearest rivals and can be considered an industry leading approach to research. The analysts begin with exhaustive primary and secondary research to understand the global chilled soup market. A market player list that comprises every node of the value chain is developed and a questionnaire is prepared that assists in the extraction of all necessary data concerning the global chilled soup market. After the information has been collected, it is thoroughly validated using the triangulation method wherein primary and secondary data are merged with Persistence Market Research analysis. The final data is then examined using proprietary, advanced tools to gain all possible qualitative and quantitative insights into the global chilled soup market.

The market analysis and forecast section of the report highlights a few of the global trends in the chilled soup market. A pricing analysis for the pouch, cup, tetra pack, and pet bottle has been given in terms of U.S. dollars for 100 grams. Some of the famous branded products and their current price range in both Europe and North America for different forms and sizes allow readers to make a comparative analysis. The report then moves on to classifying the global chilled soup market on the basis of packaging type, distribution channel, and region.

The global chilled soup market has been segmented into five major geographic regions for the purpose of this study – North America, Latin America, Europe, MEA, and APAC. Each region has been given its dedicated section wherein are mentioned vital statistics of the most important countries. The CAGR allows readers to get an idea of where the regional chilled soup markets currently stand and where they are anticipated to be at the end of the forecast period.