The sole of a shoe, also known as the outsole, is the bottom part of the shoe that comes in direct contact with the ground. Shoe soles are made from a variety of materials, including natural rubber, leather, polyurethane, and PVC compounds. Sales of footwear sole material have witnessed substantial growth in the last few years.

This growth is projected to continue over the nextfew years as well due to increase in the population around the globe and rising use of shoes in day-to-day life for various activities, besides sports and fashion. Demand is expected to be particularly high across Asia Pacific and Europe over the coming years.

In its latest revised study, ESOMAR-certified market research and consulting firm Persistence Market Research offers insights about key factors fueling the demand for footwear sole material. The report tracks global sales in high-growth markets, along with analyzing the impact COVID-19 has had on the footwear industry in general, and demand for footwear sole material in particular.

Increase in the population and parent market being a necessity across the globe will generate demand for footwear sole material. Some of the leading manufacturers already have started making specific-purpose footwear sole material,and several others are likely to follow suit to keep pace with the dynamic environment.

Owing to the ongoing crisis caused by the COVID-19 pandemic, production and supply chain activities have seen a minor slump, yet, the condition will improve with economic recovery post the containment period following the pandemic.

With a number of end users affected in regions such as Europe and Asia Pacific, supply is expected to result in a significant drop in Y-O-Y growth. Yet,Persistence Market Research expects the global footwear sole material market to expand at around 4.5% CAGR through 2031.

What is the Commercial Potential of Footwear Sole Material?

Growing awareness about health & fitness and increasing athletic activities are resulting in rising demand for footwear sole material. Furthermore, growing popularity of global sporting events is having a positive influence on sales growth. Companies are launching sports-specific sole material to grow their user base.

Rising expenditure on fashion and apparel, growing number of working individuals around the world, rising consumer disposable income levels, and improved standards of living are estimated to have a positive influence market growth.

Rise in sports activities, weight on performance, and developments in technology have made footwear gain immense popularity in sportswear, because of growing demand for fashionable, comfortable, and convenient footwear. Rising number of working people around the world could pose as an opportunity for non-athletic shoes, leading to increased demand for footwear sole material.

Leading manufacturers are investing more on research & development activities, especially on the material used for footwear soles. Competitive price offerings, increase in end-user satisfaction on performance, and economical products are the end results of R&D activities. Increasing research & development activities through collaboration or partnerships helps companies in launching new and innovative products in the market.

What is the Regulatory Impact on Footwear Sole Material Sales?

A number of regulations and government policies across various industries are expected to impact the production of footwear sole material. The need for regulations has risen from the necessity for protecting the environment, regional segregation of markets, and identifying organized sectors across the industry.

Governments create agencies to protect the environment, such as Pollution Control Agency, Environmental Protection Agency, Kano State Environmental Planning, and Protection Agency. Various regulations require manufacturers to invest heavily in new technologies, but at the same time, manufacturers face low sales in terms of volume. These factors are expected to hamper market growth to some extent over the coming years. 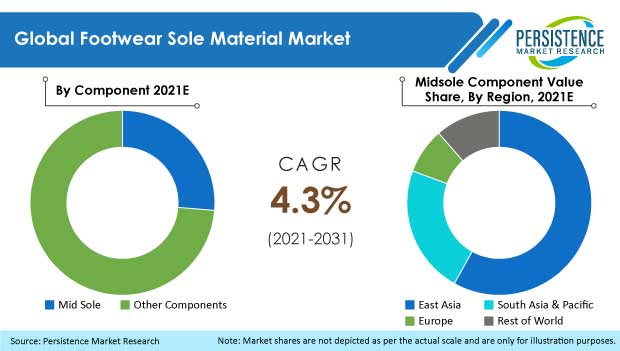 What % of Footwear Sole Material Sales will be Concentrated in China?

The market in China has attracted several global manufacturers since the past few years. One of the key factors supporting this is increase in the population. The country is now seen as the largest footwear sole material market in the world. Rapid advancements in the country’s development is providing fruitful opportunities for players in the market.

What Makes India a Lucrative Market for Footwear Sole Material?

Asia Pacific dominates the market because of the growing population and increasing disposable income. Increasing participation of consumers in sports and fitness-related activities due to growing health-conscious is driving demand for footwear sole material in India.

Persistence Market Research has projected India to remain one of the most lucrative markets throughout the course of the forecast period. Considerable population in the country means that demand of footwear sole material is bound to grow. Also, India has been attracting a lot of global brands off late.

How Will Sales of Footwear Sole Material Flourish in the U.S.?

Increase in market share of footwear sole brands such as Nike Inc., Adidas AG, Bata Limited, and Puma SE in the country cites new opportunities for market players. Key attributing factors are market liberalization that will lead to more demand for footwear soles, and increase sales in the footwear manufacturing sector. These factors bode well for the sales of footwear sole material in the U.S.

Which Product Will Grow at a Faster Pace and Why?

Among the product types, the athletic footwear segment is expected to grow at a faster pace in terms of market volume by the end of 2031. The athletic footwear segment held significant share in the market in 2020, and is forecast to account for a little over 50% market value share by the end of 2031, with an increase of 80 basis points over the forecast period.

Growth of the segment is largely attributed to growing participation of people in sports and fitness-related activities, necessitating the need to use athletic footwear.

Fascination toward outdoor activities such as running, hiking, and cycling is expected to spur demand for athletic footwear. The segment is anticipated to witness 1.5X growth in terms of value over the forecast period, and be valued at over US$ 3.1 Bn by the end of the forecast period, registering a CAGR of over 4% in terms of value. This segment is anticipated to create incremental $ opportunity of more than US$ 1 Bn by 2031.

Within this market, non-athletic footwear will remain the largest end-use industry by value and volume, due to increase in consumer purchasing power and growing demand for casual and fashionable footwear.

Rise of the middle-class population is expected to fuel demand for footwear. Consumers are in constant need of trendy and fashionable footwear. The need for comfortable, trendy, and branded footwear among all age groups will propel the market.

These factors will consequently boost consumption and revenue growth of footwear sole material. Shifting preference for buying footwear as per the occasion is another major trend in the market. Athletic footwear, casuals, fashionable shoes, formals, and traditional footwear are some of the types gaining huge demand.

Why are Customized Footwear Soles in High Demand?

Growing demand for customized footwear around the globe for patients suffering from chronic diseases such as arthritis, diabetes, knee problems, and for other activities is resulting in rising demand for footwear sole material.

Furthermore, growing demand from athletes is having a positive influence on the sales of footwear sole material. Companies are launching customized footwear soles to grow their user base. Increase in the use of footwear in day-to-day life and for various activities, growing of numbers of working individuals around the world, and rising consumer disposable income levels are estimated to have a positive influence on the growth of the market.

The market is moderately competitive in nature, with the presence of a few players offering cost-competitive products. Some of the players are focusing on carving a niche for a specific demography. The market has robust partnerships throughout the value chain, with high focus on innovation.

Manufacturers are aiming at strategic collaborations with end users and regional distributors to address the requirements of an expanding customer base. Suppliers are adopting acquisition and regional expansion strategies to establish a stronger foothold. Brand consciousness and aggressive marketing makes it challenging for new entrants in this market.

The global super absorbent polymer market is estimated to expand at a CAGR of around 5% over the forecast period of 2021-2031..