Global Market Study on Face and Voice Biometrics: Government Sector Projected to be the Most Attractive End Use Industry Segment During 2017 - 2025

Governments across the globe are implementing biometrics in security

In April 2017, Innovatrics s.r.o., a biometrics solutions provider along with Veridos, Sertracen, and IECISA entered into an agreement with the Civil Registry of Panama. This contract was supervised by the Tribunal Electoral and is meant to register births, marriages, and deaths, and make a note of any changes in people’s personal information by relying on the face and voice biometrics market. In 2016, Vision-Box, S.A agreed to conduct a pilot program for the Mato Grosso State Court of Justice with a biometric solution for improving criminal hearing personal identifications. Vision-Box is expected to deploy vb e-pass, an integrated system that considers both biometric and biographic data in real time. 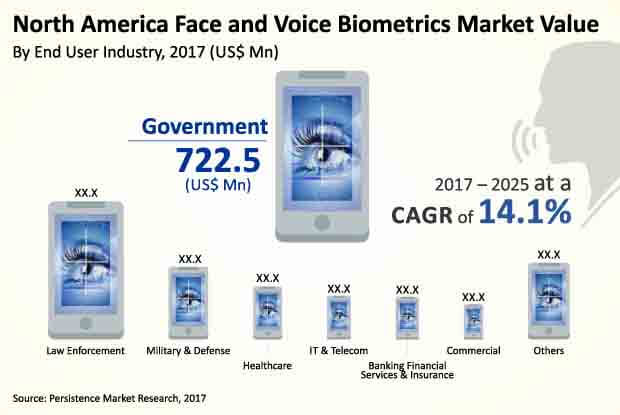 In January 2017, the EU research and investment supported TABULA RASA consortium that planned to study vulnerabilities and create countermeasures has unveiled a new project called Beat that seeks to gather multimodal biometrics data such as iris, vein, voice, face, and fingerprint scans from volunteers. This is then used for the purpose of testing. In 2016, the Malaysia and Singapore governments decided to enter into a strategic tie-up to share vital biometric information of known terrorists along with those convicted of terrorism charges. In short, governments have come to rely on the face and voice biometric market to a great extent in the 21st century.

The U.S. is anticipated to be the most attractive market in the North America face and voice biometric market throughout the course of the forecast period in terms of value. However, Canada should witness a high CAGR of 15.8% during the study period. In 2016, the U.S. face and voice biometric market was already worth nearly US$ 1.7 Bn and this should show steady growth in revenue terms until the end of 2025. The government segment is predicted to be the most attractive segment by end use industry in the North America face and voice biometric market and was valued at just under half a billion US dollars in 2016. Market forecasts indicate a steady growth of the government segment over the assessment period in the North America region with a CAGR of 14.7% in terms of value from 2017 to 2025.

Passwords and PINS to gain access to systems increasingly seem like a 20th century technology that should be consigned to the pages of history. The 21st century is poised to be all about face and voice biometrics recognition. Persistence Market Research in an upcoming report ‘Face and Voice Biometric Market: Global Industry Analysis 2012 – 2016 and Forecast 2017 – 2025’ has taken an in-depth look at the global face and voice biometric market on the basis of a number of important metrics such as CAGR, Y-o-Y growth rate, and absolute as well as incremental dollar opportunity.

The global face and voice biometric market has been segmented into five geographic regions for the purpose of this study. Each region has been studied in great detail in a dedicated section in the face and voice biometric market report. The study encompasses an understanding of the drivers, restraints, opportunities, and threats that are endemic to that specific region along with key regulations. An impact analysis has been carried out by the research experts for the readers’ benefit. The historical market size of the largest countries in every region has been contrasted with their anticipated future growth to help readers understand where to invest. The regional sections also comprise a market forecast on the basis of Technology, Type, and End User to give a complete picture to the reader.

There are a few forecast factors that could potentially have an outsized impact on the face and voice biometric market. Their relevance has been highlighted in a separate section, along with certain assumptions pertaining to the face and voice biometric market that have been made while preparing this report. Readers are advised to refer to this section to dispel any doubts they may have pertaining to the way this report has been prepared.

The research methodology developed by Persistence Market Research is amongst the best in the industry. The analysts first conduct rigorous primary and secondary research to formulate a detailed discussion guide and a list of industry players. After conducting extensive interviews, the data is collected and then thoroughly validated using the triangulation method where primary and secondary data is merged with Persistence Market Research analysts’ expert opinion. This is then scrutinized using advanced tools to gain all the necessary insights into the face and voice biometric market.