The Europe calf milk replacer market is anticipated to expand at a value CAGR of 4.1% and increase from its current size of US$ 1.54 Bn to US$ 2.3 Bn by the end of 2032. In the European region, France holds a leading share of the market, closely followed by Russia and Germany.

From 2017 to 2021, the market in the European region expanded at a CAGR of 3.1%. The early products available in the market were of variable quality due to inefficiency in casein processing. With advancements in technology and research, an increase in the value of casein and further filtration was achieved. This led to the introduction of whey-based replacers in the market.

Growing demand for animal nutrition products without the use of medications in a way that does not compromise either animal welfare or their productivity has led to the rising demand for non-medicated calf milk replacers. Non-medicated replacers have a strong foothold in the industry owing to their cost-effectiveness.

What are the Key Trends in the Market for Calf Milk Replacers in Europe?

For a newborn calf, it is easier to digest milk protein as compared to plant protein. Traditional methods for calf rearing placed increased focus on getting calves to eat solid feed as soon as possible to reduce the consumption of milk by the animal. Studies have shown that calves receiving proper nutrition reach maturation faster and produce a higher amount of milk in their first lactation as well.

As the calves grow older, they develop a tendency to better digest other proteins. This is due to the development of other parts of the stomach like the rumen. Other sources of milk replacers like eggs in the feed have reported varying levels of success. Soy is another alternative to using milk proteins in milk replacers, whereas, it requires further processing to make it more digestible. This is done to remove factors that can hamper the growth of the animal.

With the exponential growth of the population, there is increased focus on ramping up food production as well. This also means that more waste is generated as a byproduct of food processing. Milk is a very popular consumable and highly nutritious for human consumption. Allowing calves to feed on whole milk, therefore, cuts into the food share of the humans, and thus, overall production goes down. Calf milk replacers are often made by processing milk waste like whey, which is waste generated in cheese processing.

Since calf nutrition directly affects its future milk production capability, increasing efforts are being made to optimize its replacer feed in such a way that the calf receives proper nutrition without losses in production. Therefore, calf milk replacers are a growing market that holds huge potential for the future.

Calves that are fed whole milk grow better due to their high fat and protein content (31% and 25%, respectively). With advancements in research, it has been established that replacers can successfully act as an alternative to whole milk. Replacers having a lower fat content make it easier for the calf to transition into solid starter feed. This is due to high-fat content suppressing starter intake.

A growing calf requires a different composition of feed based on its age. For calves that are less than three weeks, 20%-22% protein, i.e., all milk replacers are needed. Milk replacers often have additives in them like vitamins, minerals, and medicines such as Ionophores (lasalocid, monensin) that prevent diseases such as coccidiosis in calves. These medicines can also have a growth-promoting effect.

Knowledge of key information that can directly affect the output of an entire farm is important for farmers and businesses alike. Therefore, calf milk replacers have seen a prominent rise in the communities as well. Higher outputs as a direct correlation of nutritionally balanced milk replacers are well established by numerous publications verifying the same. Among the animal husbandry community, as well replacers are becoming increasingly popular due to the benefits associated with them.

Farmers need to adopt a policy of weighing calves at birth and during the pre-weaning period to ensure the proper performance of their calves. Farmers invest in weighing tape or crates to ensure the monitoring of their calves on a regular basis. Pre-weaning management is essential for appropriate growth rates. The aim is to give calves an initial respiratory disease vaccine before the stress of weaning.

Calves raised across European countries are fed calf milk replacers during the liquid feeding period before weaning. Calf milk replacers provide more flexibility when it comes to nutrients and ingredient levels, which makes it easy for farmers to meet their management needs.

Microbial colonization of the animal intestine during its early life plays a vital role in gut function stimulation. This facilitates tolerance to environmental exposure and even contributes to disease development in later life. All of this is strongly influenced by the composition of the mother’s milk, especially the colostrum.

The composition of milk from the parent varies and often has nutrient inconsistency, the risk for pathogen exposure as well as other numerous challenges including logistics. Thus, calf milk replacers are a viable nutrition option and are widely accepted as well. For instance, a high majority of livestock rearers in the U.K. have opted to make use of a calf milk replacer diet as an alternative to a whole-milk-based diet to reduce the risk of disease transfer from the parent livestock.

There are many concerns that milk replacer-fed calves are probably not reaching their full productive potential due to them not receiving enough energy and proteins. Furthermore, the use of medicines such as coccidiostats in calves that are less than 2—3 weeks is questionable as lasalocid is toxic if given to calves that are less than 24 hours old.

Non-dairy replacers, especially ones containing soy, have low digestibility and amino acid content. They can also cause allergic reactions in the gut tissue and decrease the amount of protein the calf receives. Diarrhea, as a result of non-dairy replacers, affects calf health and causes increased expenditure in treatment and is therefore a liability. Thus, these factors can hamper the potential market for the product. 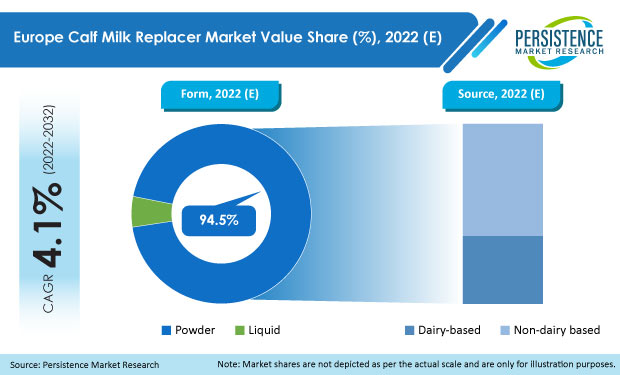 Which European Country is a Prominent Market for Calf Milk Replacers?

In the European region, France holds a major stake in the market with a value share of around 15% in 2022.

This can be attributed to the milk-derived industry, especially cheese, which generates a lot of milk by-products that can be used for the preparation of calf milk replacers.

How is the Calf Milk Replacer Market in Germany Shaping Up?

In the European market, Germany shows the most promising and incremental growth for the forecast period and is expected to progress at a CAGR of 5%. The market value share of Germany in the European market is around 13% and is currently valued at US$ 200.3 Mn.

An important factor in the growth of the German calf milk replacer market is its advancement in technology. Advanced research combined with investments in technology and their implementation to provide high-quality goods is a factor that plays a role in Germany enjoying a significant market share in the European region.

The dairy-based segment holds a significant share and is expected to be valued at US$ 1.45 Bn in 2022.

Why are Sales of Powdered Calf Milk Replacers High in the European Region?

Powdered milk products generally have a longer product shelf cycle as compared to their liquid counterparts. This can be the reason why a major market share is held by the powdered form.

Prominent companies manufacturing calf milk replacers are focused on the development of innovative value-added products. Collaborations with industry experts while optimizing raw materials is another strategy being followed. Increasing customer satisfaction means placing more focus on providing solutions and benefits while expanding precision and consultancy services. All these steps are being taken to increase their brand presence while providing consumers with an uninterrupted supply of hygienic products.

What is the market value for calf milk replacers in the European region?

The European market for calf milk replacers is currently valued at US$ 1.54 Bn.

At what rate did the market expand over the past four years?

What is the forecasted value for the market for 2032?

Revenue from the sales of calf milk replacers is expected to reach US$ 2.3 Bn by 2032.

What is a key trend in the market?

Rising awareness regarding the use of non-medicated calf milk substitutes and their benefits in animal growth and welfare is one of the key trends in the market.

Which are the top 5 companies in the European market?

Which countries in Europe account for the highest sales of calf milk replacers?

France, Russia, Germany, and the U.K. lead the European market.

What is the France calf milk replacer market stance?

The market for calf milk replacers in France is anticipated to reach US$ 335.4 Mn by 2032.