Historically, from 2016 to 2020, use of active pharmaceutical ingredients increased at around 3.4% CAGR, wherein, developed countries such as the U.S., Canada, Germany, and the U.K. held significant share in the global market.

End-to-end solutions for API manufacturing, CDMOs, and CMOs are preferred for API development. For instance Boehringer Ingelheim provides the entire production chain from synthesis of API to fill-finish under one roof.

As regulatory affairs is another critical aspect of outsourcing, companies also offer regulatory support to customers. TEVA Pharma has an exclusive team for regulatory activities such as high quality DMFs, and other registration and regulatory documents. Overall, the market is expected to expand at more than 4% CAGR through 2031.

What is the Key Opportunities for Active Pharmaceutical Ingredient Manufacturers?

Big pharma companies are focused on spending extensively on R&D. Novartis and Roche have largely invested in research programs in the past decade. Roche invested around US$ 12.7 Bn in R&D in 2019, which accounted for 19% of its revenue that year. Smaller companies spend even higher percentages of their revenue on R&D.

The high potency drug market is a growing in pharmaceutical segment creates an opportunities. The oncology market is growing enormously due to increasing prevalence of cancer. Small molecule demand dominates the API market; however new biological entity demand is also growing. 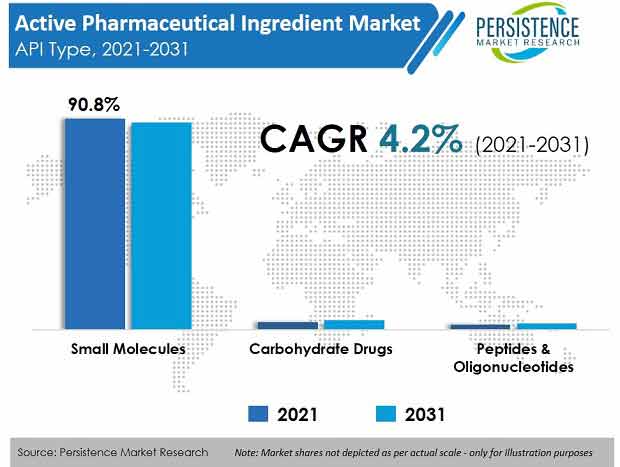 What is the Impact of Market Consolidation on the Active Pharmaceutical Ingredient Industry?

Given the association in the market, key players are focusing on mergers and acquisitions to explore lucrative opportunities. Leading manufacturers are also focusing on improving their commercializing efforts following regulatory guidelines.

Will Sales of Active Pharmaceutical Ingredients Gain Traction Due to Increasing in Contract Manufacturing Organizations?

Contract manufacturing organization are growing with an expected market share of 37% in 2031 in India. Factors influencing growth of CMOs and CDMOs are a lot of drugs went off patents, many facilities were sold to CMOs, emerging bio-pharma companies, and growth of clinical research organizations. Mergers and acquisitions in the CMO industry have further fueled this growth.

CDMOs are predictable to have a great future over the coming years due to cost efficiency through outsourcing manufacturing capabilities. Many CDMOs are under development, due to which, big companies are also trying to reduce their drug development and manufacturing costs. Leading pharma companies are striving to make their R&D easy, and are dedicated to increase the speed of the process to market their blockbuster drugs.

What Makes the U.S. the Largest Market for Active Pharmaceutical Ingredients?

The U.S. is leading in North America with a market share of 87% in 2021, and stable growth is foreseen. High consumption of active pharmaceutical ingredient-based products in the U.S. is due to increasing prevalence of chronic diseases.

Furthermore, government support for ongoing clinical research has allowed the U.S. to lead the market. The country is majorly dedicated to launching novel products and maintaining manufacturing according to regulatory guidelines.

Why is Demand for Active Pharmaceutical Ingredients Flourishing in the U.K.?

The U.K. market is expected to grow at a CAGR of 2.6% through 2031. The U.K. healthcare system is a universal and well-renowned system, largely funded by the government. It is one of the most successful healthcare systems in the world. It is not surprising that the U.K. has the highest level of spending in Europe.

According to Persistence Market Research analysis, the U.K. is identified as the third-leading market, and this position is likely to hold through the forecast period. Also, increasing pipeline drugs, rising research efforts, and presence of several major players create huge opportunity for active pharmaceutical ingredient manufacturers in the country.

For instance, in October, 2018, Pfizer Inc. and Bain Capital, LP created Cerevel Therapeutics, LLC, which is a new biopharma company working for the development of central nervous system (CNS) disorders.

China is expected to hold the largest market share of 76% in 2021 in East Asia. In China, the pharmaceutical industry is quickly rising due to two main factors - large-scale capital investments and rapid productivity growth. These two factors project an appealing destination for foreign investments as well large domestic savings.

Strategic outsourcing is trending in the pharmaceutical space, as it allows a company to focus on its core competencies, and thus, ultimately increases productivity. Pharmaceutical companies are benefited from outsourcing production to China because it reduces labor and related costs.

How Will Increasing Focus on Research Surge Demand for Active Pharmaceutical Ingredients in India?

The market in India is projected to rise at above 7% CAGR during the forecast period of 2021-2031. A report by Pharmaceuticals Export Promotion Council of India suggests that, India has been the leading country in DMF filing. This suggests that a majority of API manufacturing contracts from U.S.-based companies would be awarded to India-based companies in the near future.

According to the report, India generated the highest revenue share among the countries in South Asia, and is set to lead the South Asian market for active pharmaceutical ingredients over the coming years.

Why is Demand for Small Molecules Continuously Rising?

Small molecules will hold largest market share of 91% in 2021, due to developments in pharma research. This is due to the importance and rise of artificial intelligence (AI) in drug discovery and reaching unmet and undruggable clinical targets.

Advancements have been seen in screening technologies for preclinical research overcoming drug synthesis barriers for difficult to synthesize drug compounds. Along with small molecule drug discovery, biologics research has also been on the surge in the recent past. Safety and efficacy of the products and the ability to treat previously untreatable diseases are the most influencing factors of. Technological advancements in the overall biopharma sector have resulted in high growth of this segment.

The active pharmaceutical ingredient market is greatly consolidated in nature, with the presence of leading players operating in this space. They are focusing on research & development activities, majorly for chronic diseases such as cancer, cardiovascular, and diabetes in various clinical and research fields.

Market players are also engaged in expanding their global and regional presence through acquisitions, expansions, product launches, and improvement of distribution channels.

The global progressive multifocal leukoencephalopathy treatment market is projected to grow at a CAGR of 2.8% throughout the forecast period..