Market Study on Water and Wastewater Pipes: High Demand to Be Witnessed for Plastic Variants

As of 2021, plastic pipes comprise between 50% and 55% of global sales of water and wastewater pipes, and are projected to register a growth rate of around 6.5% during the projection period of 2022 to 2032.

Higher market growth is expected over the coming years due to increasing concerns regarding depleting water levels, not only in water-stressed regions such as the Middle East and Africa but around the world. In recent years, demand from the municipal segment has increased at a tremendous pace, particularly in water-stressed regions, especially for water supply and distribution. However, if we observe past trends, this increase in demand was positively impacted by financial assistance from international organisations such as the World Bank for improving water infrastructure in these regions

Over the coming ten years, the global water and wastewater pipes market is predicted to expand at a high CAGR of 6.5%. 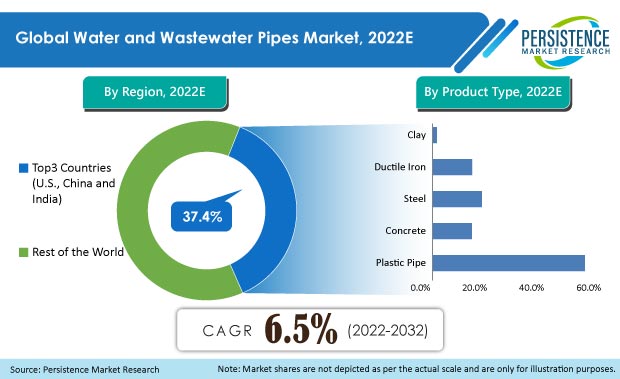 What are the Key Opportunities on Offer for Water and Wastewater Pipe Manufacturers?

Increasing investments in water and wastewater management is anticipated to create a crux of opportunities for market player. Effective management of wastewater remains a persistent problem in regions such as APAC, MEA, and others, with the discharge of unprocessed wastewater from industrial, domestic, and agricultural sources being a common problem. Across Asia, a majority of sewage still finds its way into lakes, rivers, oceans, and coastal zones without any treatment.

According to UNICEF, only 75% of Indonesians have complete sanitation and water accessibility. The government has made significant efforts to build adequate water purification infrastructure so that the water distribution sector will not be left behind.

Indonesia's announced water supply and wastewater treatment system project, which is valued at US$ 1.9 billion, is expected to boost the use of sanitation pipes over the coming years.

The construction sector remains a prominent economic sector for any country, and this is particularly true for countries in Asia, North America, and the Middle East. Furthermore, regional governments are speeding up construction projects to increase their country's economic performance.

However, the global construction sector witnessed a significant drop during pandemic-affected 2020, but due to increased government spending and widespread collaborations and partnerships among private contractors, a promising recovery was observed in 2021.

Additionally, rapid growth in urban population coupled with infrastructure development in commercial as well as residential areas has been a prominent driver global shipments of water and sanitation pipes, particularly for plastic water and wastewater pipes.

What is Hindering Demand Growth of Water and Wastewater Pipes?

“Stringent Regulations on Plastic to Stunt Market Expansion to Some Extent”

Almost every country has set regulations to control plastic waste and encourage the recycling and reuse of plastics. These regulations often prove to be a restraint for plastic production and compel manufacturers to produce standard and regularized products.

In South Africa, for example, plastic pipe components must have a material density of ≥ 930 kg/m3, and dispersion of carbon black must be ≤ grade 3, among other rules.

Growing plastic waste and stringent norms regarding plastic products are expected to be an impediment to the demand growth of water and wastewater pipes.

What is the Water and Wastewater Pipes Market Scenario in GCC Countries?

The COVID-19 pandemic significantly disputed the market in the region. However, this trend shifted market participants to focus on the Gulf region, which, in turn, uplifted market growth.

Additionally, the region has low water levels and lacks crucial water bodies such as rivers, lakes, etc., coupled with a sharp increase in urbanisation, owing to which, regional governments are investing significantly in improving their water infrastructure.

What’s Compelling Water and Wastewater Pipe Suppliers to Expand in the U.S. Market?

Recovery of the construction industry coupled with increasing investments in water infrastructure by state as well as national governments are set to drive market expansion over the forecast period.

Which is a Key Market for Water and Wastewater Pipes in South Asia & Pacific?

India is one of the most water-stressed countries in the APAC region and the world’s second-most populated country. According to the United Nations, India’s population is set to reach 1.64 billion by 2050, owing to which, its water needs are anticipated to grow exponentially and demand for water and wastewater pipes is set to grow synchronously.

Furthermore, according to a report by the Bank of America Merrill Lynch in 2019, (cited by Ministry of External Affairs, Government of India) India is set to invest US$ 270 Bn in water infrastructure over the next 15 years.

Which Product Type of Water and Wastewater Pipes Will Remain Significant?

Plastic water and wastewater pipes are seeing high demand owing to their key merits over other types of pipes.

Plastic pipes, unlike many traditional pipe materials, do not corrode and are resistant to a wide range of chemicals. Also, comparatively, steel, copper, ductile iron, and aluminium pipes all require more energy to manufacture than plastic pipes.

Up to 30% of all piped water is lost globally due to pipe leaks at some point in the system, and the primary cause is pipe failure. Plastic pipes, whether PVC or any other type, have a lesser chance of cracking than metal or concrete. Additionally, simply installation, transportation, lightweight, recyclable, and other advantages are responsible for extensive use of plastic water and wastewater pipes.

Which Pipe Size is Mostly Demanded across Regions?

By pipe diameter, up to 1200 mm plastic water and wastewater pipes account for a prominent share in the global market. Extensive application across residential and commercial spaces for water distribution as well as wastewater management has been a primary factor for increasing sales of this segment.

Which End-use Industry Will Offer Most Lucrative Growth for Market Participants?

This high market share can be attributed to the inclusion of residential and commercial sector in the municipal segment, which account for high demand for water and wastewater treatment systems.

Key manufacturers of water and wastewater pipes are resorting to strategic expansions to increase their geographical presence through acquisitions, mergers, and collaborations. Moreover, many market players are adopting recycling and other practices, which contribute toward a more circular economic value chain, to decrease their carbon footprint and make water and wastewater pipes more environment-safe.

Some of the key marker developments are:

Similarly, other key developments related to companies manufacturing water and wastewater pipes have been tracked by the team at Persistence Market Research, which are available in the full report.

How much is the global market for water and wastewater pipes currently valued at?

The global water and wastewater pipes market is estimated to be valued at US$ 64.7 Bn in 2022.

What are the key growth factors driving demand for water and wastewater pipes?

Investments in desalination plants and expansion of existing pipeline networks in GCC countries, rising use of ductile iron pipes, and growth of the construction sector are driving market expansion.

At what CAGR is the water and wastewater pipes market projected to grow during the forecast period?

What are the key trends being witnessed in this space?

Acquisitions and mergers, expansions, collaborations, and investments in R&D by key players are being witnessed in this industry.

Which 5 countries/regions drive most demand for water and wastewater piping systems?

China, the U.S., India, Germany, and ASEAN are driving most demand for water and wastewater pipes.

How is Germany faring in the European market?

Which countries are major producers and exporters of water and wastewater pipes?

China, the U.S., and Japan are major producers and exporters of water and sanitation pipes.

How is the outlook for the market in Japan and S. Korea?

Global Oil and Gas Pipes Market is projected represent a relatively high revenue growth and a healthy CAGR, accounting for more than US$ 900 Mn by 2022-end.

Plastic pipe sales in China reached 2 million tons in 2018, which are expected to be rising at a strong CAGChina Market Study on Plastic Pipes: Sewage Management and Rainwater Systems Top Application AreasR of 7% during 2019 - 2029..

Demand from power generation increased 4.2% in 2020- 2021, giving the worldwide engineering pipe hanger and support market year-over-year growth of 3.8% in 2021.