Polyvinyl Chloride is commonly called PVC and is a type polymer that is broadly manufactured after polypropylene and polyethylene. It is known to one of the most widely manufactured polymer. Polyvinyl chloride is preferred in the place of conventional materials such as copper, iron, or wood in several applications owing to its operational productivities and profits. The purest form of polyvinyl chloride is brittle solid, white, and marginally resolvable in tetrahydrofuran while insoluble in alcohol. It can be produced to be soft and flexible by adding phthalates and plasticizers. In the soft and flexible form, polyvinyl chloride is employed in, plumbing and expandable products, electrical cable insulation and some other uses which can substitute rubber. Polyvinyl chloride has high automated properties and rigidity, which improve along with molecular encumbrance and steadily reduction with rising temperature. Polyvinyl chloride decomposes at extensive temperature as its heat strength is poor. However, it has enhanced insulation characteristics but due to its high polarity, its property of electrical insulation is less important to non-polymers. 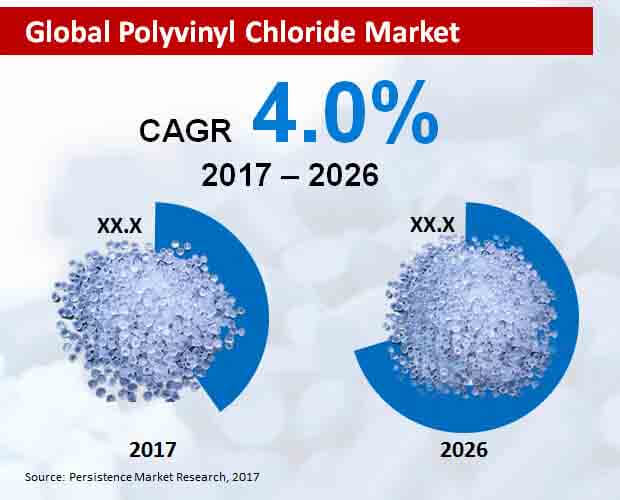 Persistence Market Research (PMR) has published a new report that presents a comprehensive outlook of the global polyvinyl chloride market. The report also presents a historical growth trajectory of the market and the present and future forecasts with special reference. The study also offers the readers with insights on trends, prospects, drivers, and restraints along with segmental analysis and regional overview.

Asia Pacific to Dominate Market Till 2026

On the basis of region, the global polyvinyl chloride market has been segmented into North America, Latin America, Europe, Japan, Asia Pacific except Japan, and the Middle East and Africa. Amongst all these regions, Asia Pacific emerged as the leader in 2016 accounting for a Herculean share in the market in the same year. It is expected to touch a valuation of over US$ 58,318 Mn by the end of 2026. This growth of the region can be attributed to the growing use of PVC across the several industries in the region. In developing countries such as India, Vietnam, Indonesia, and China, the PVC market is anticipated to rise at an extensive pace with its application growing in industries such as automotive, construction, and manufacturing, among others.

On the basis of end-user, the global polyvinyl chloride market has been segmented into construction, automotive, packaging, electrical and electronics, consumer goods, and other end users. Among all these, the market is expected to be led by the construction sector with the use of PVC rising in this sector. The rising number of construction activities across the globe is the leading factor that is driving the use of polyvinyl chloride in the sector. Moreover, the favorable characteristics of PVC also makes it a must use ingredient in the construction sector.

The manufacturers of PVC are striving to expand their consumer base and are thus focusing on product differentiation as well. The companies operating in the market are are Formosa Plastics Group, Axiall Corporation, BASF SE, Mexichem S.A.B, Westlake Chemical Corp., LG Chem,  and Ineos Chlorvinyls Ltd., among others.

A new market research report has been published on polyvinyl chloride. The report provides incisive insights on the chronological growth trajectory of the market along with the present and future growth prospects present in the market. The report offers an exclusive analysis of the global market along with regional and segment based insights.

The report offers an entire summation of the market including an official abstract that draws out the centre examples progressing in the market. It furthermore discusses on a couple of facets, for example, drivers, obstacles, and prospects that have been found in the global market. It also acquaints readers with figures related to volume, value, and development rate of the market from a growth point of view. With respect to market segmentation, each segment is analysed and presented in the report. It also gives an evaluation in light of the market circumstance, and moreover presents a value chain analysis of the products and applications in concern. A year to year progression of the market has likewise been offered in the report for the reader to be particularly aware of the changing scenario of the market.

The report is the end result of the cautious research work of the market analysts employing reliable sources. The information introduced has been studied carefully by industry experts. The data that has been presented here has been assembled from various tried and tested sources. The figures have also been checked by the examiners and can be used to settle on key decisions and formulate strategies.

The market study conveys an immense outlook on the engaged scene of the overall polyvinyl chloride market. It features the competition prevalent among the present vendors in the market and also puts weight on the future circumstance of the market. The profile of the players is based on a SWOT examination sought down by company angle, product portfolio, strategies, finance related information, and year-to-year projections. The organizations have been explored minutely covering their key developments, innovations as well as mergers and acquisitions and agreements with other prominent organizations.

The Full Picture as to Why Our Report is Dependable

The reports_bk_01_01_2020 made by our industry analysts are credible and have been researched and validated from several primary and secondary resources. What makes us unique is the fact that along with presenting an analysis of the market’s historical and present scenario, we also present a forecast review of the market for the benefit of our reader. The presentation is unique in the form of various charts, tables, and diagrams. Every bit of information present in the market research report is unique. Expert opinions are also present in the report that can be directly used by the readers to make future decisions.