Patient positioning accessories are needed for the older population for everyday exercises for those recuperating from injuries, medical procedures, or some other ailment. Leading players are focusing on collaborations with other players for geographical footprint expansion for distribution of products worldwide.

Players are also focusing on collaborations with hospitals and radiation centers for the supply of products such as thermoplastic masks, sheets, cushions, and other similar devices, which provides long-term opportunities in the market. Long-term contracts are expected to have fruitful returns. Favourable reimbursement policies and increasing healthcare expenditure are also some factors driving market growth.

A new report by Persistence Market Research details the trends in 20+ high growth markets, along with the impact the COVID-19 pandemic has had on the healthcare industry in general, and on the demand for patient positioning accessories in particular.

Rapidly increasing geriatric population is expected to drive demand for patient positioning accessories, since people aged above 60 years are at high risk of developing cancer. Furthermore, rising incidence of cancer along with increasing adoption of treatment will provide abundant opportunities for market players through the forecast period.

Due to the fragmented nature of the market, manufacturers are focusing on partnerships with other players. Furthermore, development and advancements in radiation therapy systems are also aiding market expansion. Hence, any advances and growth in the radiotherapy market will directly have a positive impact on the demand for patient positioning accessories.

According to Persistence Market Research’s analysis, the patient positioning accessories market is projected to progress at a CAGR over 3% from 2021 to 2031

How is increasing installed base of medical imaging devices boosting demand for patient positioning accessories?

Installed base of clinical imaging devices has expanded rapidly over the previous decade. With increasing repayment and other government approaches for cancer therapy, there would be further expansion in the use of patient positioning accessories.

The greater part of the APAC region is providing resources for new clinical imaging instruments as the rate of malignancy cases is rising. Driving factors are the basic need to improve clinical productivity, modernize devices, and improve treatment arrangements.

What is the impact of increasing number of traumatic brain injuries and aneurysm cases on the market?

An initiative called ‘The International Initiative for Traumatic Brain Injury Research’ (In TBIR) was undertaken by the European Commission (EC), National Institute of Health (NIH) and CIHR in October 2011 to advance clinical traumatic brain injury research and treatment, with a long-term goal of lessening the global burden of TBI by 2020. Such initiatives are expected to increase demand for patient positioning accessories, worldwide.

How is the COVID-19 pandemic affecting demand for patient positioning accessories?

With COVID-19 cases rising all across the world, concerns with regards to insufficiency of necessary life-saving accessories and other fundamental clinical supplies are increasing. Until a pharmacological treatment is created, ventilators are the imperative treatment required for COVID-19 patients. Also, there is significant requirement for a rapid rate increase in the manufacturing process for a wide scope of test units (self-administered, antibody tests, and others). 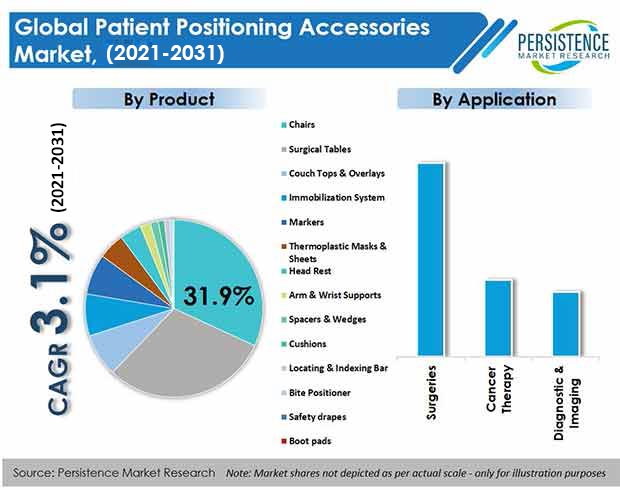 How big is the opportunity in the U.S. for patient positioning accessories?

The medical services system in the U.S. is well-known for its high level expenditure and infrastructure. The care system of hospitals and care centers are well-equipped with administrative principles and insurance strategies.

Government and administrative bodies in the U.S. are embracing a few expense control intends to lessen their medical care trouble. The move from a volume to a cost-based system is significantly determined by different measures attempted by suppliers, governments, insurance payers, and biotechnology organizations.

A portion of the actions are result-based benefits, valuing, hazard sharing, serious offering, and value control. A worth-based medical services system won't just give improved results through incorporated care pathways, and this is probably going to affect funds on the R&D of cutting-edge clinical therapy advances. The market in the U.S. is expected to progress at a CAGR of more than 3% during the estimate time frame.

How is rising number of infectious diseases in Germany influencing demand?

Increasing number of infections is pushing patient positioning accessories interest in Germany. The Robert Koch Institute (RKI), a German research institute and government organizations are liable for infectious control and prevention, as per the German Protection against Infection Act. Every year, outcomes are printed in the Epidemiological Yearbook of the Notifiable Infectious Diseases. New information on the situation showed more than 50 irresistible diseases in Germany as of 2016.

The information shows expanded rates of a large number of irresistible diseases including, however not restricted to: disease, measles, meningococcal meningitis, typhus tuberculosis, leprosy, HIV/AIDS malaria, whooping cough, and syphilis. A large portion of the tropical diseases that entered the country from Africa was controlled, and there were no large episodes. Nevertheless, the expanded instances of irresistible infections are set to surge demand for patient positioning accessories in Germany.

What is the impact of increasing geriatric population of China on demand for patient positioning accessories?

China the most populated country on the planet, confronting the fast aging of its populace. As per information from China's National Bureau of Statistics, toward the end of 2018, 11.9 percent of the population (166.6 million individuals) were 65 or more elder. China's elderly emergency is well in progress.

The country has different plans to manage the aging populace, including building and improving well-being and clinical systems for the elderly, empowering family care joined with social consideration, advancing adaptable retirement, and relaxing birth strategy.

How are government initiatives boosting sales of patient positioning accessories in India?

Increasing government programs to provide affordable and quality healthcare are expected to complement growth of India's biopharma as well as patient positioning accessories market. High adoption of surgeries to treat chronic diseases such as diabetes, cancer, lung diseases and others in India also fuels demand for patient positioning accessories.

Moreover, India is also considered as one of the top regions for infectious diseases in the world, increasing the need for patient positioning accessories in the country. Increasing patient pool due to rise in population, emergence of new diseases, and lifestyle changes are also boosting demand for biopharmaceuticals, which is expected to provide high opportunity for manufacturers of patient positioning accessories.

The chairs segment is expected to hold the highest share due to rising demand from ambulatory centers, hospitals, and different settings such as diagnostic centers and specialty centers. Chairs are highly demanded for accurate and efficient diagnostic imaging. There is more interest for diagnoses in emerging nations such as India and China, which will drive sales of patient positioning accessories such as chairs over the estimate time frame.

Why do hospitals demand the most patient positioning accessories?

Advancements in medical care in different nations such as the U.S. and Japan have brought about improved cost-effectiveness for different treatment and diagnostic administrations. Likewise, technological innovations in treatment for quicker recovery and decreased pain during surgeries and procedures have reinforced the market, driving demand for patient positioning accessories across hospitals.

The surgeries segments is estimated to hold more than half of the share of all applications due to rising number of medical procedures due to high occurrence of chronic diseases. Public well-being activities have since a long time centred on issues relating to maternal, child health, and infectious diseases. But there has been an epidemiological change in recent times with rise in non-transmittable diseases; 80% of deaths are occurring from these conditions happening in low-and centre pay nations (LMICs).

With expanding industrialisation and urbanization, wounds from vehicular accidents will progressively establish a significant extent of the worldwide infection load, and with it, the requirement for emergency and trauma surgical services is expected to rise. This increases the need for surgeries, thus increasing the requirement for patient positioning accessories.

Companies are constantly launching new products in the market. Furthermore, they are striving hard to develop and acquire regulatory approvals for new procedures and interventions.

Given the consolidation in the market, bigger players are focusing on increasing collaborations with other market players.

Global rehabilitation equipment market is forecasted to reach a figure of about US$ 13,400 Mn in 2022 and is poised to exhibit a robust CAGR in the period of assessment.