IoT connected devices collect large amounts of data and these devices are equal in value to the critical information that they gather. The number of such devices is rising on account of the steady demand for IoT services in different sectors for various applications. Therefore, the IoT analytics market is enabling companies to create services and platforms that allow them to efficiently analyze and manage real-time information streams from diverse data sources. This allows companies to better manage, optimize, and predict business operations and processes, improve profitability and efficiency, and neutralize threats. Thus, data analytics is vital for the growth of IoT and companies are focusing their efforts on the IoT analytics market and its entire ecosystem. Companies are devising appropriate strategies to deploy and procure relevant tools that should allow the successful adoption of IoT and operation analysis in real time.

Software complexity and lack of skilled professionals a huge challenge

One of the major restraints in the IoT analytics market is the complex software that requires highly skilled resources. Developing hardware, software, and system integration necessitate trained and specialized resources to handle data preparation, create predictive models, and integrate these into applications. The resources are either unavailable or too expensive to hire, which stifles the growth of the IoT analytics market.

To cater to the unending demand for IoT among business organizations and offer them cutting-edge technology, key players in the IoT analytics market have entered into joint ventures and partnerships with other players. Several connected device manufacturers such as Cisco Systems, telecommunication giant AT&T and tech conglomerates such as IBM Corporation have decided to offer smart solutions for the purpose of advanced data analytics. This is typically by way of IoT platforms. For e.g. – In March 2017, IBM Corp. partnered with AT&T to provide enterprise customers with industrial IoT data insights. AT&T uses IBM products such as IBM Machine learning, IBM Watson Data Platform, and Watson IoT Platform to manage devices and apps and offer insights from different sources of data. IBM Corp. also collaborated with Cisco Systems in June 2016 to provide instantaneous IoT insights at the network edge. Customers at remote, far-flung locations could be immensely benefited with these combined solutions of IBM Watson and Cisco’s edge analytics that help in the better understanding of network edge critical data. 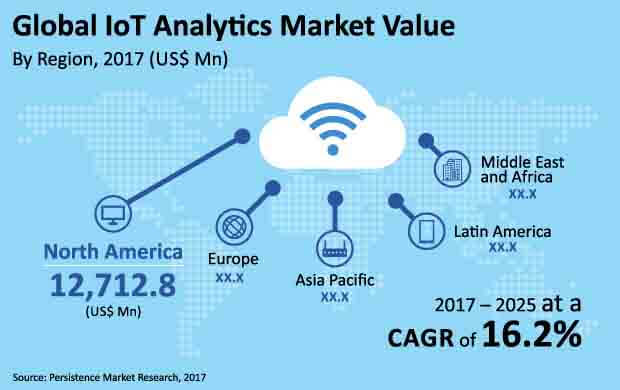 North America accounts for a lion’s share of the global IoT analytics market and is poised to continue its dominance throughout the forecast period. Within North America, the U.S. is far larger than Canada and it was valued at slightly above US$ 8.8 Bn in 2016. Canada, on the other hand, is poised to record high Y-o-Y growth rates along with a substantial CAGR of 21.2% from 2017 – 2025. As a result of its well-developed medical infrastructure coupled with an ageing population, healthcare is predicted to be the most attractive vertical in the North America IoT analytics market and it was worth just under US$ 4.3 Bn in 2016. Healthcare is anticipated to show steady revenue growth throughout the forecast period, painting a bright future for key stakeholders in this industry.

The Internet of Things is an intrinsic part of connecting electronic devices with each other and enabling seamless communication within smart homes, cities, transportation, and other products. IoT analytic inclusion allows the production of relevant information as and when required. In the report ‘Internet of Things (IoT) Analytics Market: Global Industry Analysis 2012-2016 and Forecast 2017-2025’, Persistence Market Research has taken an in-depth look at the IoT analytics market over an eight year forecast period beginning in 2017. The IoT analytics market has been analyzed on the basis of key metrics such as CAGR, Y-o-Y growth rate, and absolute as well as incremental dollar opportunity.

There are certain forecast factors that could have a substantial impact on the IoT analytics market. Their impact, along with relevance has been detailed in a particular section of the IoT analytics market report. A few assumptions have also been made with respect to the forecasts and they have been expressly spelt out in the succeeding section.

The research methodology adopted by Persistence Market Research to prepare the IoT analytics market report is one of a kind and stands well above its immediate rivals. Company analysts begin their study with exhaustive primary and secondary research for preparing a market player list that includes all components of the value chain. After all the important data has been extracted, it is scrutinized using proprietary tools and validated using the triangulation method to obtain both qualitative and quantitative insights into the global IoT analytics market.