Sales of acid violet 43 are rising, especially in the hair care product segment. It is a widely used colorant in cosmetics products as well as the textile industry. Persistence Market Research’s report analyzes the use of acid violet 43 in different colored products, including its increasing application in hair dyes.

The scope of this new report covers the consumption assessment of acid violet 43 offered for application in the textile industry, hair dyes, shampoos & conditioners, soaps, and others.

Manufacturers’ effort in offering high-quality acid violet 43 for specific end-use industries is a major driver that is anticipated to boost demand over the forecast period of 2020 to 2030. The report also focuses on the factors that are responsible for the rapid growth of the market across South Asia and East Asia countries. It also analyzes the impact of COVID-19 on the acid dye market in general, and demand for acid violet 43 in particular.

Why are Future Projections for Acid Violet 43 Brighter than Historical Trends?

From 2015 to 2019, the market experienced a value growth of 5%. Consumption of acid violet 43 was high in the hair dye segment with high functional properties, accounting for around 40% market share. With the growing cosmetics industry and demand for body care products including shampoo, conditioners, and soaps the demand for acid violet 43 is increasing for producing such products.

However, with rising demand for dyes in the cosmetics industry, use of acid violet 43 is expected to rise further. Manufacturers in developing countries are focusing on increasing their production capacities by installing new and improved technologies that lead to less wastage.

Developing countries are witnessing high growth with countries such as China, India, and Thailand producing and consuming a large amount of acid violet 43 for various industries. Overall, the market is expected to expand even faster over the coming years, at a CAGR of around 7% through 2030.

What are Some of the Main Trends in the Cosmetic Color Industry?

There is an ongoing trend among cosmetic color manufacturers of offering a huge palette of shades to their customers by innovating products. Cosmetic manufacturers are expanding their product portfolios, and the cosmetic dyes and pigment colors industry has been witnessing enormous demand, heavily investing in research on innovative colors.

There are a large number of consumers across the globe seeking cosmetic products to enhance their looks for personal as well as professional reasons. Manufacturers aim to offer the right colors and products to satisfy this growing demand and increase their market share.

How will Advancements in Technology Boost Demand for Acid Violet 43?

Advancements in technology is being witnessed all across the globe, including developing countries. Manufacturers in the field of acid dyes are taking advantage of these advancements to increase their production efficiency and production capacity. Various technologies are used to dye clothes easily, faster, and in a very eco-friendly way.

AirDye technology is widely used by manufacturers as it involves the use of air instead of water in the textile dyeing process. This has gained traction in developing countries in the past decade. This method consumes far less amount of water, up to 95% less, and also less energy as compared to traditional dyeing methods.

Such methods and new technologies are expected to create opportunities for players in the acid dye market producing acid violet 43. 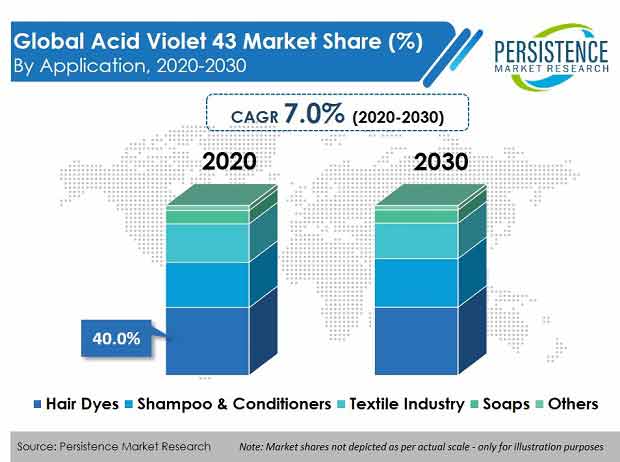 How is Research & Development in the Acid Dye Market Creating Opportunities for Manufacturers?

Manufacturers of acid dyes are investing in research & development to improve their product portfolios by developing new products and applications. Companies are also focusing on methods for shortening production processes, minimizing waste, and improving existing products. They are focusing on ensuring a smooth transition of production processes by setting up commercial research labs.

Acid violet 43 manufacturers are focusing on the process of chemistry to achieve high chemical efficiency for colorants. Among the focus areas are product purity and effluent production. Monitoring technology trends to understand market opportunities and unfulfilled needs is necessary. This is expected to create opportunities for manufacturers to increase sales and expand their market share.

What are Some of the Challenges Faced by Acid Violet 43 Manufacturers?

Dyes are subjected to a wide range of regulatory restrictions across various countries. There are concerns related to their use in cosmetic products and consumer products in general. Three main regulatory authorities, including the US Food and Drug Administration, the European Commission, and the Ministry of Health, Labour, and Welfare, in Japan, observe and monitor the use of acid violet 43 in the market. The European Regulation of Cosmetic Products (EC 1223/2009), in Annex IV, lays down the rules for use of dyes in these products.

Cosmetics legislations are frequently being updated; hence, analytical methodologies must be constantly improved to fulfill regulatory requirements. There are concerns regarding their use in products directly coming in contact with human skin. Thus, their use is strictly monitored in such products, and manufacturers must get them approved by regulatory authorities such as the FDA.

Also, major portion of the dyes used in the textile industry is lost in effluents every year during dyeing and finishing operations, owing to inefficiency of the dyeing process. These dyes are discharged in water bodies such as lakes, rivers, and other natural water bodies. This reduces the penetration of sunlight and results in decreasing the process of photosynthesis, reducing the availability of oxygen for aquatic creatures.

Why Does Europe hold the Highest Share in the Acid Violet 43 Industry?

In the European region, manufacturers are widely using acid violet 43 as a synthetic dye in cosmetic products. This presents a good opportunity for the exporters of acid violet 43 dyes from developing countries. The main driver of the market in Europe is massive demand from the growing cosmetics industry.

Products such as colored cosmetics, soaps, shampoos, and conditioners are mostly made from synthetic ingredients. Many companies in the European market are replacing synthetic dyes with natural ingredients, owing to consumer demand and the sustainability factor of raw materials.

With a large number of consumers in Europe for cosmetics products, the industry is expected to grow over the forecast years and maintain a leading position at a value CAGR of around 6% through 2030.

Why is Asia Pacific Expected to Offer High Potential for Acid Violet 43 Manufacturers?

Asia Pacific accounts for a large market for dye production, with the presence of major players in India and China. Asia Pacific countries produce more than 800 varieties of dyes and dye intermediates, including direct dyes, acid dyes, reactive dyes, and pigments that are widely used in various industries such as textiles, leather, paper, paints, plastics, printing, and even the food industry.

Countries such as India and China export dyestuff to the European Union, the U.S., Indonesia, Hong Kong, South Korea, and Egypt. Manufacturers in the Asia Pacific region offer acid violet 43 majorly for the textile industry and various other industrial applications.

How is the Use of Acid Violet 43 in Cosmetic Products Anticipated to Benefit Manufacturers?

Synthetic dyes are preferred over natural dyes owing to their lower production cost, long-lasting brightness, and greater stability toward light, heat, and pH extremes that may occur during the manufacturing process. Acid violet 43 is a colorant that is used in hair products in the cosmetic industry. For uses other than in hair dyes and colors, it must be certified by the FDA. Acid violet 43 is widely used in the preparation of more than 50 different types of hair care products.

Consumers across the globe are spending more on clothing and accessories, with the fashion industry offering a wide range of options for customers of all age groups. With changing demands and preferences of consumers, there has been a positive correlation between consumer expenditure in various categories and the standard of living. In developing countries, consumer spending is higher on food, followed by clothing, housing, and other commodities.

In developed economies, as the disposable income of consumers increase, the share of basic categories, such as clothing, increases. The textile industry is growing at a fast rate, benefiting acid violet 43 manufacturers with increasing demand for various colorants. Use of acid violet 43 in the textile industry is growing at an estimated value CAGR of 6% for 2020 to 2030.

Manufacturers such as Colosperse Dyes and Intermediates are focused on increasing their production capacity, along with adopting advanced technology to cater to an increasing consumer base.

The global instant soup market has witnessed substantial growth over the past few years, and this trend is expected to continue through the course of the forecast period (2020 to 2030). The market is estimated to rise at a steady CAGR of 5.5% through 2030..