Seat types such as regular, recliner, folding, and others have been considered in this study by Persistence Market Research. The market is anticipated to witness significant growth over the coming years owing to the introduction of several new trains, metros, new rail coaches, and refurbished rail coaches. Moreover, the significantly growing railway industry all over the globe will boost demand for train seat materials during the assessment period.

Train seat material consumption is anticipated to grow 1.6 times over the next ten years. This is due to increasing demand from the railway sector to set up train seats in new and refurbished coaches. Since the railway sector is witnessing substantial growth all over the globe, it is also expected to benefit the market for train seat materials as well over the forecast period.

The sector also has witnessed significant growth in the past few years due to development in infrastructure, and introduction of various new trains and metros and mass rapid transit systems.

However, the ongoing crisis of COVID-19 pandemic affected the market to a significant extent owing to national lockdowns, social distancing, and delaying of various projects and plans in the railway sector. Further, disruption in supply chain and decrease in demand from train seat manufacturers put the growth outlook of the market to a tepid rate.

With initiatives taken by the governments of various countries to boost economic growth, the market is expected to get to the desirable growth rate in the near future.

Owing to massive investments done by regional governments for the development of infrastructure and developing railway networks, demand for train seat materials market is estimated to grow at a significant rate during the forecast period.

Key market players are expanding their presence by collaborating with other market participants to increase their market presence in other regions of the globe. Players are also focusing on entering into long-term agreements with railway companies to supply their products and increase sales.

What is the Commercial Potential for Train Seat Materials?

With increasing investments, several new high-speed trains are anticipated to be introduced over the coming years, which will benefit demand for seat materials. The high-speed rail industry is projected to grow at a substantial rate in the near future, due to the ability of these trains to cover longer distances in a relatively short period.

The number of countries in which high-speed trains are operated is expected to approximately double. East Asia and Europe are expected to witness higher consumption of train seat materials due to higher investments in the high-speed rail sector.

Some of the prominent upcoming high-speed rail projects include the introduction of the HS2 project to connect London, Midlands, and Scotland. The Chuo Shinkansen Maglev Line is being developed by JR Central in Japan. This project is expected to be operational by 2027.

The California high-speed rail network with an estimated budget of US$ 80 Bn is estimated to carry over 40 million passengers a year, once fully operational. Construction of the Riyadh Metro is estimated to cost around US$ 22.5 Bn, and is expected to be operational soon. Investments in several projects for introducing high-speed rail across various countries are expected to boost demand for train seat materials.

Europe is known for its strictness and stringent regulations when it comes to safety from chemicals, hazardous substances, fire safety, etc. The European Union’s EN45545 and British Standard’s BS6853 are fire safety standards for trains, which state the specifications for fire testing of materials and components to be used in trains. 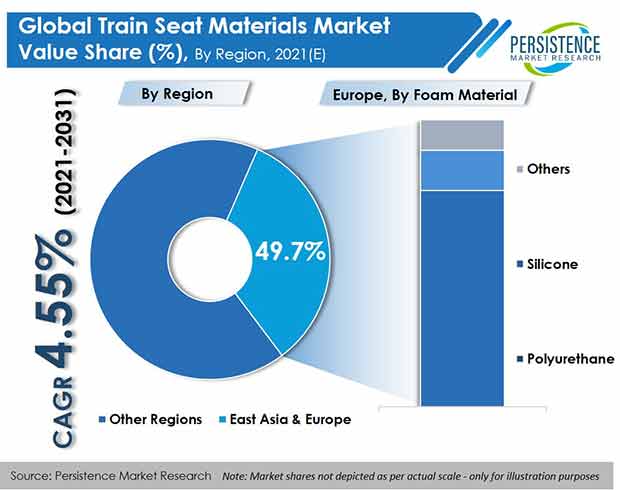 How Large is the Opportunity in China for Train Seat Materials?

China is anticipated to remain one of the fastest-developing nations. The country has witnessed tremendous growth in its infrastructure, and also massive investments in the development of its railway network. The country is also developing several high speed trains to make traveling faster.

Further, the country is focusing on introducing various new trains, high speed trains, and metros and rail coaches to increase its rail transportation capacity, which will benefit manufacturers of train seat materials over the coming years.

What are the Growth Projections in India for Train Seat Materials?

India is expected to witness significant growth in its rail industry owing to development in infrastructure, presence of enormous population, and people favoring low-cost transportation. Moreover, the introduction of several new trains and metros each year, along with introduction of several new and refurbished coaches, will boost demand for train seat materials across the country.

Why is Germany a Lucrative Market for Train Seat Materials?

Germany has the presence of advanced infrastructure along with strong connectivity of the rail network system. The country also has an excellent high speed train system. Germany is anticipated to witness considerable growth in demand for train seat materials over the coming years owing to its plan to introduce new and refurbished rail coaches and several new normal and high speed trains. The country holds more than one-seventh of the market share in Europe.

Is Consumption of Train Seat Materials Increasing in Saudi Arabia?

Saudi Arabia is expected to witness considerable growth in demand for train seat materials owing to the government’s plan to launch various mass rapid transit systems, metros, and high speed trains in the country. With increase in the number of trains there will be requirement for train seats, which will benefit train seat material manufacturers in the years to come.

Which Seat Cover Type is Expected to Exhibit Lucrative Growth?

Which Train Type is Expected to Account for Highest Demand for Train Seat Materials?

Demand for use in high speed trains is anticipated to witness substantial growth over the coming years owing to massive investments in high speed rail networks by several countries to improve their infrastructure and decrease the time required for travelling. The segment is anticipated to consume a significant amount of train seat materials as the seats of these trains will require more cushioning, since most high speed trains will have recliner seats.

Increasing investments in the railway industry are anticipated to drive the production of rolling stocks, which will ultimately boost demand for train seat materials. Increasing urbanization and demand for cost-efficient modes of transportation will lead to the introduction of several new trains, coaches, and carriages.

Several European countries are also investing an enormous amount to extend their rail networks. The U.K. is expected to add more than 7,000 new carriages to its train operations, which will benefit 6,400 extra services each week, by 2021 end. Spain is expected to launch new high speed trains by the end of 2021.

The train seat materials market is a significantly competitive and dominated by several market participants offering competitively priced products. Leading manufacturers are gradually concentrating on innovative technologies to design train seats to improve customer experience by increasing the comfort level of the seats.

Manufacturers are seeking strategic collaborations with regional end users and distributors and other market participants to meet the needs of a growing consumer base. Further, collaborations and partnerships by key players with other regional players and train operators are been done to increase revenue.

Global lightweight automotive materials market to cross a figure of about US$ 76,200 million in 2022 and expected to grow with a CAGR in the period of assessment.