Global Market Study on Super Absorbent Polymers: Demand for Sodium Polyacrylate as a SAP to Surge

Super absorbent polymers (SAPs) are materials that can absorb substantial amount of water relative to their mass. Their properties and nature make them a widely utilized material across many applications, including medicine, civil engineering, soil science, agricultural production, and hygienic products.

Also known as hydrogels, they are loosely cross-linked polymer chains of high weight. Owing to their chemical composition, they are able to absorb liquid manifold times their weight. Thus, they are highly appropriate to be used in disposable diapers, adult incontinence products, feminine hygiene products, agriculture, and other applications.

In its latest revised study, market research and consulting firm Persistence Market Research offers insights about key factors driving demand for super absorbent polymers. The report tracks the global sales in 20+ high-growth markets, along with analyzing the impact COVID-19 has had on the market.

Super absorbent polymers were developed in the year 1960 by the U.S. Department of Agriculture through its work on materials that improve water conservation in soils. Before that, the best water absorbing materials were substances such as cellulosic/fiber-based products like sponges, fluff pulp/cotton, and tissue paper.

The first products were adult incontinence products and feminine sanitary napkins. Later, in Europe, SAP was used in a baby diapers in 1982 for the very first time. Advancements in super absorbent technology and performance have been largely directed by demand in the segment of disposable diapers.

Furthermore, super-absorbent technology is in high demand from the disposable hygiene industry and agriculture sector, which is increasing its application day by day. This increasing demand for SAP in a number of applications is expected to fuel market growth over the coming years.

According to Persistence Market Research’s analysis, sales of super absorbent polymers will increase at around 5% CAGR from 2021 to 2031.

What is the Commercial Potential of Super Absorbent Polymers?

Super absorbent polymers (SAPs) have been used in many applications due to their outstanding characteristics. In case of agriculture applications, this material in the soil absorbs water from rainwater or extreme irrigation, and then frees it slowly to the roots, which results in better growth rate.

Furthermore, they can be used for the controlled release of pesticides and agrochemicals. SAP can stimulate many properties of the soil and also be used to increase both, nutrient retention and water-holding capacity of the soil in dry.

What is the Regulatory Impact on Global Sales of SAPs?

Therefore, the European Union has imposed regulations on the usage of super absorbent polymers according to their applications. Diaper manufacturers are required to follow these regulations, which may reduce the usage of SAP to some extent. 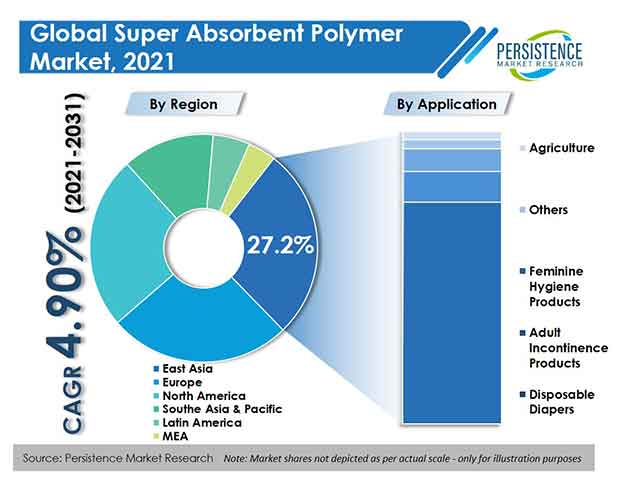 How Large is the Opportunity in China for SAP?

The use of baby diapers in China started late, but the market of SAP has grown rapidly over recent years. China accounts for more than one-tenth of the world’s infant population. Rising adoption of adult incontinence products in China has been driving demand for SAP over the years.

India is one of the largest potential markets for SAP, owing to strong economic development in the country coupled with large population and high birth rate. In India, diapers and sanitary napkins are an urban phenomenon, and thus, acceptance for these products is quite low in rural areas, which is restricting market growth to some extent.

But growing awareness regarding feminine hygiene products and baby care products is leading to increasing investments in SAP and related products.

What is the Market Scenario in Japan?

Japan so far has been one of the biggest markets for SAP, as the first superabsorbent polymer was invented here, which, in turn, led to quick adoption of SAP. Along with Japan, increasing demand from China has also increased manufacturing activities in the country.

According to the World Bank data, more than one-fourth of the overall population in Japan is above the age of 60. Thus, as the statistics suggest, there has been significant increase in demand for adult incontinence products in Japan, which require more adult diapers than baby diapers with high absorption capacity.

How Brazil is Propelling Demand for Super Absorbent Polymers?

Sodium polyacrylate, which is one of the product types of super absorbent polymers, is largely used as an absorbent for liquid solutions and water in baby diapers, adult incontinence products, and feminine hygiene products, as it can absorb up to nearly eight hundred times its weight.

Due to this property of sodium polyacrylate, this segment is gaining preference over others. This segment is expected to expand at a significant CAGR over the coming years.

Which Application of SAP is Expected to Be the Most Attractive?

It has been observed that, nowadays, baby diapers are widely preferred over traditional methods, which has surged the consumption of SAP. Owing to the high market penetration of diapers, demand for SAP is anticipated to record steady growth across many regions.

The global SAP market is a significantly competitive, dominated by global players offering competitively advanced SAP-based products. Leading market manufacturers are focusing on partnerships with major distributors and ramping up their existing production capacity due to increasing demand.

Many manufacturers are doing this by increasing their number of subsidiaries across countries. Also, companies are highly investing in R&D to provide advanced and innovative products to customers for various applications.

The sales of sheet molding compounds (SMC) are growing at an impressive rate to record a value of ~US$ 2 billion in 2019, which has been found out by the latest research report published by Persistence Market Research (PMR)..