Superfruit production has been on a rise in developing countries such as China, India, Turkey, Philippines and many others. Also, the growth in superfruit consumption is not just limited to these countries but also U.S., Russia, Egypt, Spain etc. are the major superfruit consuming countries globally. Asia Pacific regions have evolved into a high-value growth for superfruit consumptions for juice and juice concentrates. The global market for superfruit is estimated to grow significantly and the major contributing factor is consumer orientation towards health food and healthy lifestyle. “Superfruit” is a term used to refer to fruits that have high nutritive value and are often consumed for the health benefits associated with it. A lot of high-value marketing is put in to promote the products made from these superfruit. Products made from such superfruit are often showcased to have numerous applications. The applications of superfruit include juices, dietary supplements, fresh bakery, sports drinks, functional food, fortified water and flavored drinks.

On the basis of fruit type, the global Superfruit market has been segmented as –

On the basis of distribution channel, the global Superfruit market has been segmented as –

On the basis of application, the global Superfruit market has been segmented as – 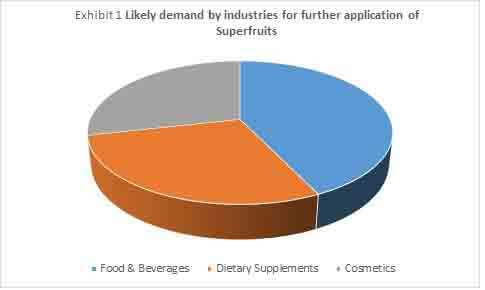 Launching new product variants in superfruit market, generating awareness & marketing about the benefits of Superfruit products through various promotional activities are some of the key drivers supporting the superfruit market growth in the near future.

The Superfruit market is anticipated to be positively influenced by evolving consumer preferences, and increasing health consciousness. Catering the growing demand for products containing several health benefits is one of the key supply-side driver supporting the superfruit market growth. Also the plan in marketing and advertising them to the consumers play a critical role in sales of the superfruit products.

A modelling-based approach and triangulation methodology will be followed to estimate data covered in this report. A detailed market understanding and assessment of the applications, types, distribution channel of the product segments covered in the study is followed by carrying out a demand-side approach to estimate the sales of target product segments, which is then cross-referenced with a supply-side assessment of value generated over a pre-defined period. The statistics and data are collected at a regional level, consolidated and synthesized at a global level to estimate the overall market sizes.