In Spain, International Union of Railways (UIC) and Spanish rail infrastructure manager ADIF have come together to achieve the goal of ‘Smart Stations in Smart Cities’.

In India, the Ministry of Railway and Ministry of Urban Development have teamed up to achieve the smart city mission. Moreover in metropolitan cities, governments are concentrating on investing substantially to encourage the introduction of large-scale public transport infrastructure, such as bullet trains and high speed trains, to make public transport quicker. All these factors are expected to lead to the expansion of the rail wheel and axle market size over the coming years.

This particular factor is anticipated to further drive the global rail wheel and axle market. Automation in metro trains is gaining traction across the world, as it is anticipated that train automation will reduce overall energy consumption by up to 42%. Cutting-edge innovations in rail networks, such as the inclusion of 5G networks, is anticipated to boost the market during the forecast period.

Use of Lightweight Materials for Autonomous Driving Trains: Increasing technological advancements in train networks and trains, along with the trend of autonomous technology, are compelling train manufacturers to invest hefty sums in R&D for the manufacturing of light materials for wheels and axles for freight trains, passenger trains, and short-distance trains.

Approximately 7 Bn passengers travel each year by trains, and these passengers desire to reach their destinations quickly and comfortably at a low fair. This is another factor driving autonomous technology in trains. Moreover, autonomous trains are also projected to gain superior traction, owing to the fact that they are equipped with computerized monitoring technology that can detect failures in rail wheels and axles.

Increasing Fleet of Solar Powered Trains: Solar-powered rails has various benefits compared to diesel-powered locomotives. Normally, diesel propelled trains have double engine sections. While, in solar-powered trains, one section is replaced by solar gears. Solar panels are installed on the rooftops of the bogies and electric motors & batteries are fixed in the second diesel compartment.

Solar panels installed on train rooftops can produces voltages between 600 V to 800 V, which completes the requirement of railway engines of 750 V to 800 V to propel the rails. Expanding fleet of such trains will surge the growth of the rail wheel and axle market. 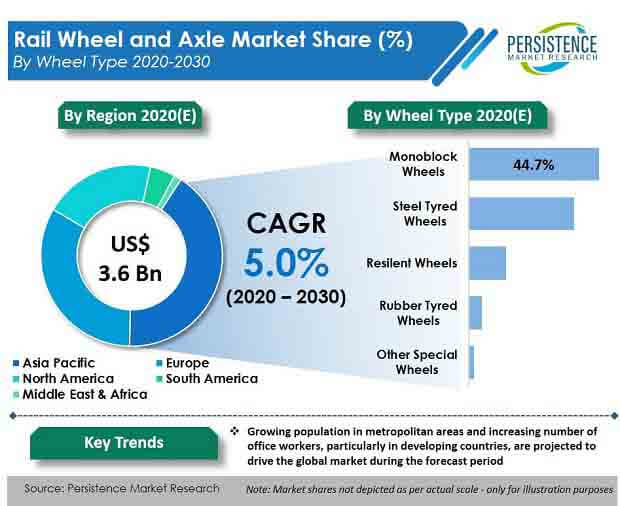 The global rail wheel and axle market is considered to be a competitive market space, due to the presence of numerous local as well as international players.

Since most of the manufacturers have identical products, many are focusing on improving their aftersales service offerings to customers and investing extensively in R&D to develop better quality products and technologically-advanced rolling stocks for locomotives.

Moreover, player are focusing on acquisitions and joint ventures to enhance their position in the global rail wheel and axle market.

The COVID-19 pandemic has affected all countries and sectors, alike. Trade and import-export restrictions, lockdowns, and shutting of manufacturing plants have adversely affected the global rail wheel and axle market.

PMR’s study on the rail wheel and axle market is divided into six significant segments - wheel type, axle type, end use, sales channel, product type, and region. This report offers comprehensive data and information about the important market dynamics and growth parameters related to these categories.

Global GSE tires market is expected to witness steady growth at a CAGR of 4.8% during the forecast period 2018-2028, according to a PMR study. Positive growth prospects of the GSE tires market are mainly attributed to shifting preference towards air travel and growing focus on improving the overall experience of customers..

Trailer manufacturers are increasing their production capacities or establishing new plants to capitalize on the growing demand for trailers, and gain benefits from lower capital requirements and labor costs in selected regions..