Industrial Hydrogen Sales on an Upsurge In US, Europe, And Asia, Driven by High Adoption Rate in LED and Semiconductor Industry

The industrial hydrogen market in the US, Europe, and Asia are estimated to grow at a healthy pace by 2027. Multiplicity in end-use of industrial hydrogen such as electronics, metal fabrication, pharmaceutical sector, and fertilizer sector is expected to fuel this market growth. Rapidly growing LED and semiconductor industry is projected to generate growth prospects in the coming years, creating revenue prospects in the market.
The stagnant manufacturing and production during the COVID-19 have crippled the progress of the market in the US, Europe, and Asia. Low demand is set to dampen the growth rate of the market. The market is expected to resume the usual business as the relaxations increase in activities.
Market players are exploring advanced methods to cuts down high production costs. Cost-effectiveness is expected to drive the competition in the market. The manufacturers are exploring opportunities in the fuel sector to expand their product portfolio. To satiate the growing demand in the market, the market competitors are collaborating and indulging in partnerships.  They are investing in green hydrogen to strengthen their market presence. Established players in the global market include Air Liquide, The Linde group, Air Products & Chemicals Inc., Messer Group GmbH, and Praxair inc.

Factors and trends impacting the market

Increasing demand from various end-use industries such as electronics, glass, metal production, welding, and metal fabrication is anticipated to boost growth of the industrial hydrogen market over the forecast period. Preference for onsite hydrogen generation systems and increasing technological advancements that promote reduction in the overall hydrogen production cost by electrolysis of water are other factors likely to push the demand for industrial hydrogen through 2024. However, a high cost of hydrogen production by electrolysis of water as compared to other conventional methods of production is likely to pose a challenge for the sustained growth of the electrolytic hydrogen market. 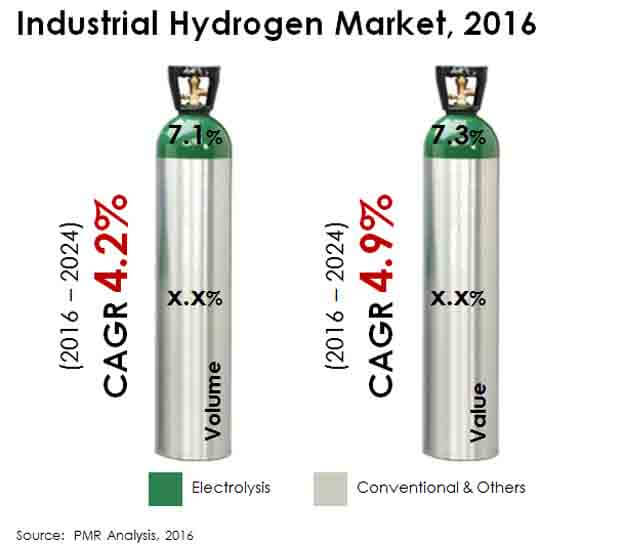 Air Liquide, Air Products and Chemicals Inc., The Linde Group, Praxair Inc., and Messer Group GmbH are some of the primary producers of industrial hydrogen across the world.

Hydrogen is undoubtedly the clean fuel of the future and finds wide application in various industries including chemical, electronics, glass, metal production, pharma and biotech, and welding and metal fabrication. In a recent study, Persistence Market Research analyzes the adoption of hydrogen across various industries and presents a forecast of the industrial hydrogen market for the period 2016–2024. The primary objective of the report is to highlight factors and trends influencing the industrial hydrogen market over the forecast period and present market projections for industrial hydrogen across different production methods and applications, for a few specific global regions. A special attention has been given on production of hydrogen by electrolysis of water owing to a global focus on the development of green production technologies. The report specifically focuses only on those industrial applications of hydrogen where a small volume of hydrogen is consumed and does not cover large volume end uses of hydrogen such as refinery, ammonia production, energy applications, etc.

To understand and evaluate the demand and opportunities in this market, the report is categorically split into three sections – by production method, by application, and by region. The report studies the industrial hydrogen market both in terms of market value and market volume. 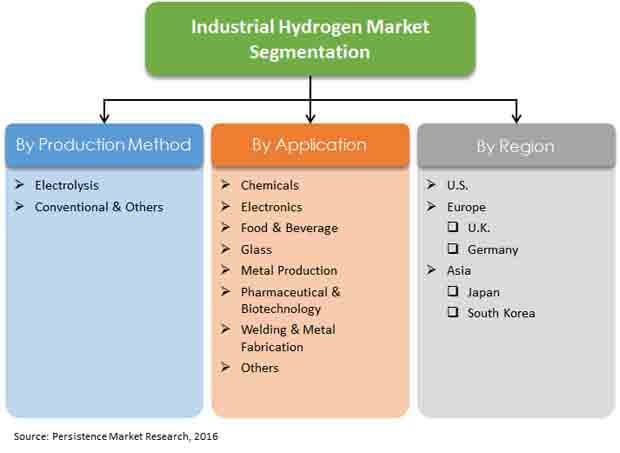 The report starts with a market summary and market definition and provides a detailed analysis of the key drivers, restraints, opportunities, and trends governing the industrial hydrogen market over the forecast period. The subsequent sections include an in-depth analysis of the industrial hydrogen market by production method, by application, and by region; and present a granular detail of the market size in terms of value and volume for the period 2016-2024. All the three sections assess the market on the basis of various factors affecting the market, covering the present scenario and future prospects. The report also includes an overview of production technologies, supply chain management analysis, and a list of major hydrogen producers and consumers in each region. For market data analysis, the report considers 2015 as the base year, with market numbers estimated for 2016 and a detailed forecast provided for the period 2017–2024.