Market Study on Pesticides: Popularity of Bio-pesticides to Rise Rapidly Over Coming Years

Newly-released data on the pesticides market shows that global demand is anticipated to reach around 3.8 Mn tons by the end of 2021, registering a Y-o-Y growth of approximately 4.3%. As of 2020, bio-pesticides comprise between 6% and 7% of the global pesticides market value, and are projected to register a promising CAGR of over 10% during the projection period of 2021 to 2031.

As per the research, Persistence Market Research has anticipated that pesticide sales across the globe will witness a growth rate of 5.5% through 2031. As of 2020, pesticides hold approximately 3/5 of overall agrochemicals volume. East Asia is anticipated to remain a key region in the pesticides business, and the market is estimated to expand at a CAGR of 5.5% during the same period.

Revenue from conventional pesticides, including crop protection chemicals, herbicides, insecticides, and fungicides, collectively totalled more than US$ 103.5 Bn as of 2020, representing a decline of 3.4% compared to the previous year.

The global population was pegged at 7.8 billion in 2020, with a change of 1.05% during 2019-2020. High population growth has fueled global food consumption, especially in developing economies, which has boosted demand for agrochemical products such as pesticides. Farmers are extensively adopting intensive farming methods to maximize yield and minimize damage from pests and diseases.

Extensive adoption rate of modern farming methods and policy support from government agencies is expected to elevate demand for agrochemicals, including pesticides, over the forecast period of 2021-2031.

What are the Key Opportunities for Pesticide Manufacturers across the Globe?

Increasing deforestation and urbanization directly contributes to a decline in cultivable area, and thus, it is essential to enhance crop yield, and one way to do this is by using crop protection chemicals. Advancements in new and innovative technologies improve the yield as well as lifespan of crops. For this, genetic transformation and modification to increase the production of crops and increase lifespan are done. Adoption of new and innovative laboratory-prepared species of crops are trending to increase productivity.

Moreover, crops also need agrochemicals such as pesticides for pest control and maintaining optimum yield. There is rising demand for pesticides for genetic modified crops.

Therefore, development of innovative and effective technology to enhance crop yield with better quality in cultivable land is expected to create significant growth opportunity for the agrochemicals market across the globe over the coming years.

What is Hindering Sales of Pesticides to Some Extent?

Pesticides are used to protect crops from pests and increase crop production. Attributing to the adaptation of pests to agrochemicals, more and advanced chemicals are being used, which negatively impact the environment immediately as well as in the long term. Thus, there are stringent government regulations that restrict the use of hazardous chemicals in the production of pesticides.

A number of environment protection organizations have raised issues against the use of such chemicals citing environmental concerns. Stringent government regulations such as emission control and Clean Air Act are anticipated to hamper demand for agrochemicals over the forecast period

Stringent regulations in developed countries such as the U.S. and Canada regarding agrochemical emissions under the Clean Air Act have been posing a major challenge for manufacturers.

How is Growing Trend of Organic Products Shaping Pesticide Demand?

Various campaigns and movements such as the Youth Climate Change Movement, Organic Foods, Smart buildings, and others have been started by regulatory bodies and people to spread awareness about environment protection and adverse effects of using synthetic products that are harmful for the environment and eventually affect human health.

With rising awareness toward environment protection, a huge shift in the consumer base toward organic foods has been observed over the recent years. Organic foods are produced without the use of any synthetic chemicals, including pesticides, which is anticipated to hamper sales of pesticides going ahead.

What is the Impact of Shrinkage in Cultivation Land Area on the Market for Pesticides?

Since the past few years, population growth has been translating to a decline in farmland area. Rapid urbanization and industrialization have been shrinking the cultivation land with growth in the number of industries, houses, highways, and many other infrastructural buildings.

Use of agrochemicals such as fertilizers and pesticides encourage plant growth and secure the crops from diseases. Thus, the need for better yield per unit area of cultivation land, owing to shrinking size of cultivable land, is driving growth of the market globally. 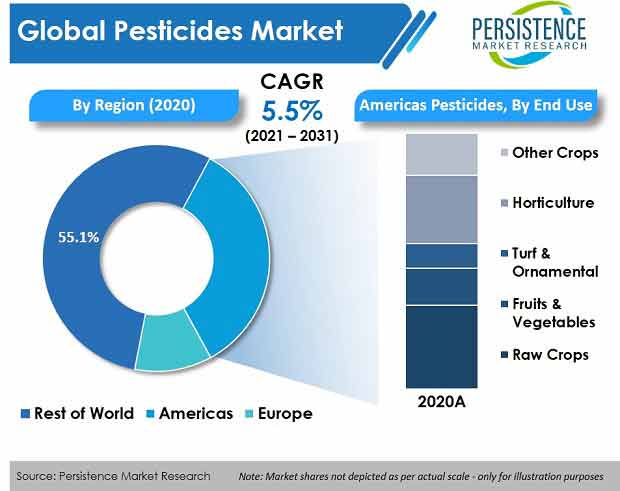 China is expected to be in the list of most prominent countries for pesticide demand across the globe. China is estimated to contribute around 44% to the revenue generated from the sales of pesticides across the globe in 2021.

China is the most populous country in the world, with a population of almost 1.4 Bn. Owing to such a high population, the country creates immense demand for food and other agriculture products. To cater to growing demand, farmers based in the country are adopting various methods to increase productivity and fulfil the country’s food demand.

Manufacturers based in the country leverage manufacturer-friendly governmental policies. On the other hand, those based in developed regions such as North America and Europe have to face various stringent regulations imposed over them. Imposition of such regulations across the globe is promoting manufacturers to expand in China, elevating the production capacity of China for pesticides.

Why Does the U.S. Account for High Demand for Pesticides?

In 2021, pesticide demand in the U.S. is anticipated to grow 4.8% year-on-year, bucking initial scepticism about how the market would perform during a global pandemic. Across the whole of North America, total sales of pesticides are expected to reach US$ 15.7 Bn by 2031.

Unlike the fragmented global pesticides sector, the U.S. pesticides industry is consolidated with a few key players such as Bayer Crop Science, Syngenta LLC, and BASF SE holding a dominating share in the country. These manufacturers compete in the country on the basis of pricing, product innovation, and other parameters to gain a competitive edge.

Various regulations such organic tags and certificates provided by the U.S. government is promoting the use of bio-pesticides in the country. According to a study, registration of land for organic farming is rising at a remarkable rate in the country, which is expected to propel demand for bio-pesticides.

Why are Bio Pesticides Gaining More Traction than Conventional Pesticides?

Revenue from the bio-pesticides segment is expected to grow at a robust 10.1% year-over-year in 2021. Demand for conventional chemicals is anticipated to increase 4.1% between 2020 and 2021, giving the combined pesticides market year-over-year growth of 4.8% in 2021.

Awareness toward environmental degradation is rising fast across the globe. Various regional government and environment regulatory bodies are imposing stringent regulations to control environment degradation. Rising awareness is promoting the consumer shift to eco-friendly products. Owing to this, demand for bio-pesticides is expected to rise hurriedly over the forecast period of 2021-2031.

Which is the Highest Consumer Application of Pesticides?

Pesticides are most widely used in the agriculture industry to protect crops from harmful insects, fungi, weeds, and others. Row crops are expected to consume around 32% of the pesticides produced globally.

Rising demand for food and agricultural-based products owing to substantial rise in populations is expected to propel demand for pesticides in the agricultural industry.

Did COVID-19 Dent the Sales Prospects of Pesticides?

The agricultural sector is one of the industries that experienced least or no impact owing to the outbreak of novel coronavirus. Agricultural operations continued largely unhindered despite nationwide lockdowns because of their classification under essential activities.

The agricultural industry had to continue its operations across the globe to fulfil the high global demand for food. Demand for pesticides witnessed a negligible negative impact due to the pandemic scenario.

However, production and supply of raw materials was impacted due to travel and trade restrictions imposed across the world. Owing to disruptions caused in the supply chain, the market witnessed a nominal drop of 2.5% across the globe.

Key market participants are engaged in strategic expansions to increase their geographical presence through acquisitions/mergers and collaborations. Moreover, some manufacturers are engaged in the development of new and innovative products through research & development activities.

Similarly, recent developments related to companies manufacturing pesticides have been tracked by the team at Persistence Market Research, which are available in the full report.

How much is the global market for pesticides currently worth?

The global pesticides market is estimated to be valued at over US$ 108 Bn as of 2021.

What is the main factor driving demand for pesticides?

Growing need for agricultural products is driving demand for pesticides across the world.

What will be the consumption outlook for pesticides through 2031?

Consumption of pesticides are projected to increase at 5.5% CAGR and be valued at around US$ 188 Bn by 2031.

What are the key trends being witnessed in the global marketplace?

Expansions, partnerships, collaborations, and investment in R&D by key players are being witnessed in this space.

Which 5 countries drive most of the demand for pesticides?

China, the U.S., Brazil, Canada, and France drive most of the demand for pesticides.

How is France faring in the European market?

The market in France is set to expand at 4.5% CAGR and hold nearly ¼ share in the European market.

Which countries are major producers and exporters of pesticides?

China, the U.S., and Brazil are major producers and exporters of pesticides.

How is the outlook for the market in Japan and S. Korea?

Together, Japan and S. Korea are slated to hold 2% share in the global market by 2031.

Urea sales to witness a value CAGR of 2.3% over the assessment period of 2021 and 2031. In terms of volume, demand is expected to increase at around 2.2% CAGR over the same period..

Global Market Study on Wax - the industry segment is expected to grow at a healthy CAGR and in Terms of Revenue during forecast period of 2017 - 2026.