Network connectivity is crucial for any business as the adoption of data centers is increasing nowadays. In commercial data centers, fibre channel HBAs are highly utilized.

Although suppliers of fibre channel hubs and switches have received a lot of market attention lately, each hub or switch port needs a connection on the other end of the fibre. Typically, a host bus adapter or HBA chip adapter is used for these connections.

Persistence Market Research identifies that demand for dual port FC HBAs will increase at the highest CAGR of around 13.1% during the forecast period, owing to the growing adoption of dual port FC HBAs in connecting servers to fiber channels in enterprise data centers. 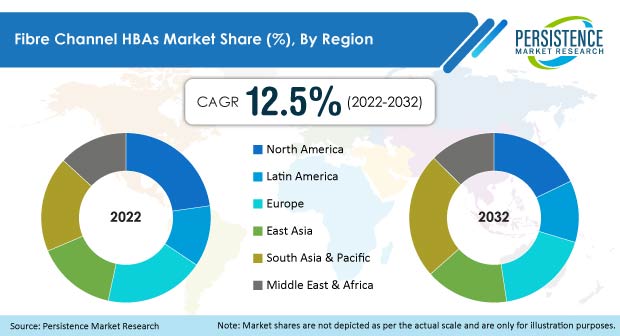 Why is There High Demand for Fibre Channel HBAs in the Industrial Sector?

Rise in the demand for fibre channel HBAs in the industrial sector is driving market growth substantially. In this sector, fibre channel HBAs are used because of their benefits such as higher network connectivity, superior performance, and modern management functionality that can cut off days in managing and installing adapters.

Thus, the growing demand for high bandwidth data transfer from the industrial sector is contributing to market development. Increasing need for high performance and highly accessible networks and IIoT transformation and Industry 4.0 is driving the requirement for companies to finance industrial networks to enhance the communication of functional data.

The South Asia & Pacific regional market is estimated to expand 4.2X during the forecast period of 2022-2032.

In the South Asia and Pacific region, fibre channel adapters are utilized in several application areas, mainly in the IT industry. On the other hand, fibre channel HBAs serve the demand of enterprises in adopting cloud-based applications because of the quicker data transmission ability of these mediums. Increasing digitization and growing adoption of storage area networking in the region are creating huge demand for fiber channel host bus adapters.

Rapid shifting of workloads to the cloud and the need to substitute storage technologies such as InfiniBand and Ethernet are also driving market growth in the region.

Why is the Adoption of Fibre Channel HBAs Increasing Rapidly in the U.S?

Fibre channel HBA demand in the U.S. is expected to account for nearly 74.9% share of the North American market share in 2022. The U.S. is witnessing positive demand growth for fibre channel HBAs owing to increasing adoption in the IT and telecom industry.

Fibre channel host bus adapters market growth is also accelerating in the U.S. due to the presence of major vendors such as Broadcom, Dell, IBM, Cisco, and others; all these major players offer technologically-advanced fiber channel HBA products.

Thus, the increasing adoption of fiber channel HBAs in enterprises and the presence of major vendors are driving market growth in the U.S. Rise in IT spending and increased server virtualization are also major factors contributing to market development.

How Big is the Opportunity for Fibre Channel HBAs in the U.K.?

The European region is predicted to remain the most attractive market during the forecast period. According to the study, the U.K. fiber channel HBAs market is predicted to offer an absolute $ opportunity of US$ 615 Mn through 2032.

In the U.K., continuous adoption of data centers is the important factor driving market demand. Growing technological advancements and increasing demand for networking in enterprises are also major factors driving product demand in the U.K.

Growing demand for high bandwidth data transfer among enterprises is also contributing to the growth of the fibre channel HBAs market in the U.K. Existence of major fiber channel vendors is also aiding market development.

Why is Demand for Fibre Channel Adapters Increasing in India?

According to this study, the market for fiber channel HBAs in India is estimated to grow 4.7X during the forecast period.

In India, fibre channel HBAs are utilized in the industrial sector for providing high bandwidth connectivity for networking and also in the enterprise and industrial sectors for connecting devices to each other. This speeds up data transmission between different kinds of devices that support fiber channel protocols, comprising servers and storage area networks.

Thus, growing demand for fiber channel HBAs in enterprises and the industrial sectors in India for quick data transmission is driving demand in the country.

How is the 64 GBPs (Gen 7) Segment Faring in the Fiber Channel HBAs Market?

The 64 GBPs (Gen 7) segment is expected to grow 3.3X during the forecast period. 64 GBPs (Gen 7) is created for challenging mission-critical workloads and appearing applications.

6offer offers high-speed network for connectivity and is custom-built for meeting the needs for high scalability, low latency, scalability, and predictable performance.

What Will Drive Demand Growth for Fiber Channel HBAs in the IT and Telecommunications Industry?

How much is the fibre channel HBAs market worth?

The global fibre channel HBAs market was valued at US$ 5 Bn at the end of 2021.

At what rate is demand for fibre channel HBAs predicted to rise?

Which regional market is expected to showcase high growth?

South Asia and Pacific is projected to register strong growth at a CAGR of 15.6% during the forecast period.

Which is the leading market for fibre channel HBAs?

North America leads the global market with a share of 22.7%.

What are the key trends driving the fibre channel HBAs market?

Which is the leading fibre channel HBA type?

Quad port FC HBAs are expected to dominate the market with a share of 46% by 2032.

What was the last 4-year fibre channel HBAs market CAGR?

What is the stance of the East Asia fiber channel HBAs market?

The fiber channel HBAs industry in East Asia is estimated to grow 3.3X by 2032.

Which countries account for this highest usage of fibre channel HBAs?

Global sales of wireless audio devices surpassed the market value of US$ 2.5 Bn in 2018, predominantly driven by rapid expansion of music industry and flourishing prospects of the music streaming space. .

The broadcast equipment market is driven by various factors such as transition from analog to digital broadcasting, increasing focus on production automation, growing acceptance of HD worldwide and rising number of digital channels..