Global Market Study on Cardiac Pacemaker: North America Regional Market to Register a Declining CAGR of -1.4% Between 2016 and 2024

A pacemaker is a small electrical device used for treatment of arrhythmias in patients suffering from irregular heartbeat. Arrhythmias is of two types, tachycardia and bradycardia. When the heart beat is too fast it is termed as tachycardia and when it is too slow it is known as bradycardia. During arrhythmia the heart is not able to pump enough blood to the other parts of the body, which causes fatigue and fainting. According to Center for Disease Control and Prevention (CDC) sudden cardiac death rates are more than 600,000 per year, and it has been observed that 50% of patients die during first occurrence of cardiac disease. The prevalence of atrial and ventricular arrhythmias increases with age with no sign of coronary heart disease. A pacemaker helps the patients suffering from arrhythmias to lead an active and healthy life style. There are two types of pacemaker devices, implantable cardiac pacemaker and external cardiac pacemaker. The implantable pacemaker device is placed under the skin on left side of the chest, and is connected through leads guided through a blood vessel to the heart. The external cardiac pacemaker are used for temporary pacing and require a fully furbished clinical facility. The global cardiac pacemaker market has been segmented on the basis of product type, end users, and regions.

The global cardiac pacemaker market is mainly driven by growing prevalence of cardiovascular disorders in developed nations, high disease occurrence in underdeveloped nations, various supportive government initiatives, and non-government organizations funding. Other factors driving cardiac pacemaker market are advanced diagnostics, favorable reimbursement scenario for treatment and cost effective steps taken by various governments. However, Lack of awareness regarding cardiovascular disorders among the population in developing countries, high cost of treatment and high rate of product recalls due to device malfunctioning are expected to restrain growth of the market over the forecast period. Focus on new device launches approaches and development of fast, reliable and cost-effective diagnostic methods will define the future landscape of cardiac pacemaker market.

Based on product type, the market has been segmented into implantable pacemakers and external pacemakers. Implantable pacemaker segment is expected lose market share by 2024 and reach US$ 3,116.2 Mn. The loss in revenue is due to preference given to cardiac defibrillators over pacemakers for treating arrhythmias. A cardiac defibrillators is similar in shape and size to a pacemaker and is able to perform defibrillation and pacing of the heart thus able to treat life threatening arrhythmias. Implantable cardiac pacemaker will remain the most attractive segment in terms of revenue generation when compared to external pacemaker segment due to its modality and effectiveness over external pacemaker which allows for temporary pacing and technological advancements.

Based on major end users, the cardiac pacemaker market is segmented into hospitals and ambulatory surgical centers. Hospitals segment are expected to account for the highest share for cardiac pacemaker market over the forecast period due to higher rate of implants that take place in the hospitals segment as the reimbursement rates offered are better as compared to ambulatory surgical centers. 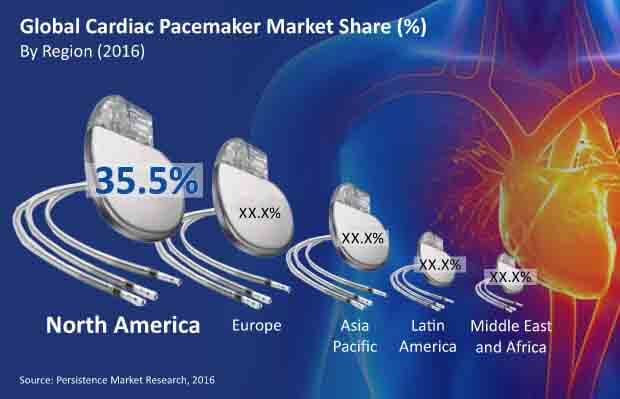 The global cardiac pacemaker market is dominated by few key players such as Medtronic’s, St.Jude Medical Inc., Boston Scientific Corporation and BIOTRONIK SE & Co. KG and together, these companies constitute around 80%-85% of the overall market share.

This report by Persistence Market Research (PMR) examines the global cardiac pacemaker market for the period 2016–2024. The primary objective of the report is to offer updates and information related to market opportunities in the Global Cardiac Pacemaker Market.

Based on product type, the market has been segmented into implantable pacemaker and external pacemaker. Implantable pacemaker are further sub segmented into single chamber, dual chamber and biventricular pacemaker, all  the three sub segment have exhibited a negative CAGR due to device malfunctioning. Further, based on end-user segmentation, hospitals segments are the most attractive segment for cardiac pacemaker market compared to ambulatory surgical centers as most of the pacemaker implants are performed in registered hospitals.

The next section of the report analyses cardiac pacemaker market by region and provides market outlook for 2016–2024. The report also analyses the impact of drivers and restraints in each region. Key regions assessed in this report include North America, Latin America, Europe, Asia Pacific (APAC), and Middle East & Africa (MEA).

The above sections—by product type, end users, and region—evaluate the present scenario and growth prospects of the global cardiac pacemaker market for 2016–2024. We have considered 2015 as the base year and provided data for the forecast period, i.e., 2016–2024.

Detailed profiles of the providers are also included in the scope of the report to evaluate their long- and short-term strategies, key offerings, SWOT analysis, and recent developments in the global cardiac pacemaker market.

In addition, it is imperative to note that in an ever-fluctuating global economy, we not only conduct forecasts in terms of CAGR, but also analyze it based on key parameters such as year-on-year (Y-o-Y) growth rates to understand the predictability of the market, and to identify the right opportunities across the cardiac pacemaker market.