As assessed by Persistence Market Research, the adult age group is expected to hold a market value of US$ 322.7 Mn by 2032. Overall, bowel irrigation system sales account for around 9.6% revenue share in the global ostomy care accessories market, which was valued at around US$ 3.3 Bn in 2021.

The number of Neurogenic Bowel Dysfunction (NBD) cases is increasing. NBD is a type of faecal incontinence that results from ailments related to the Central Nervous System (CNS). Conditions such as spinal cord injury, multiple sclerosis, and Parkinson’s disease are known to cause NBD. Patients suffering from the above-mentioned conditions usually have no sensory or motor control over the muscles of the upper and lower gastrointestinal tract. 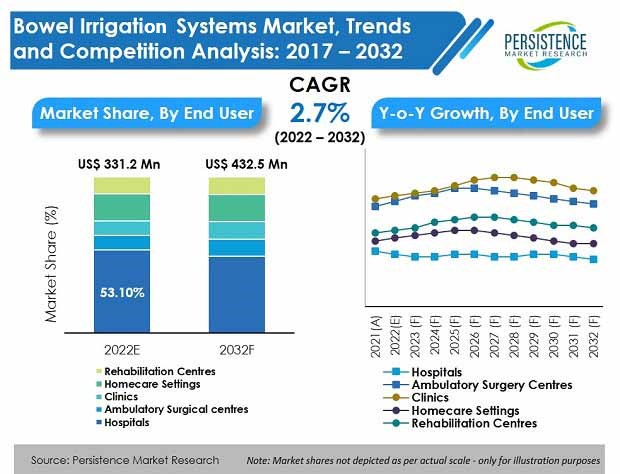 The coming years are set to provide many lucrative opportunities for manufacturers of bowel irrigation systems around the world. Manufacturers have started understanding the importance of R&D investments in order to offer a diverse range of products.

Many companies are taking extensive measures to make their product offerings more versatile through innovations such as the provision of an irrigation connector to deliver medications, odor-proof coating of the system, and also the use of compounds such as activated carbon in collection bags.

Faecal incontinence is a common problem among children. It can be due to chronic constipation or some congenital conditions as well. Soiling/ encopresis is the process where the liquid stool seeps past the normal solid stool, out of the rectum. This usually happens due to fear of painful defecation among children.

Voluntary stool retention can lead to a dilation of the rectal wall and sigmoid colon, which leads to depletion in the reactivity of muscles as well as sensory nerves, further leading to constipation or faecal incontinence.

Can Demand for Bowel Irrigation Systems Be Affected in Any Way?

When a patient with fecal incontinence visits a healthcare professional, bowel irrigation is not the first line of treatment preferred by clinicians. Instead, various other treatments or exercise forms such as Kegel exercises, pelvic floor strengthening exercises, conscious bowel training, pharmaceutical drugs (laxatives, anti-diarrhoeal drugs), and the use of bulking agents such as muscular thickening agents, especially for the rectal area, are more frequently adopted.

This is a major restraining factor for this market as the adoption of bowel irrigation products will get hampered due to higher use and popularity of other treatment options.

Typically, laxatives are more preferred for bowel management, since they offer a more gradual improvement of constipation symptoms. Doctors usually recommend it since they are the first line of defense before any other medication or irrigation system is used.

Taboo surrounding faecal incontinence still persists in many nations worldwide. People with bowel issues already experience a sense of deviation or differentness from the ideal norm; hence, many are reluctant to approach a healthcare professional since this can accentuate their sense of insecurity and also aggravate the symptoms of the underlying condition.

The stigma associated with bowel management issues is very much considerable, which makes many affected patients unwilling to admit that they have faecal incontinence, and reluctance from the physicians can also be seen when it comes to inquiring about it. Faecal incontinence will affect what the person wears and what kind of activities they engage in. Difficulty in defecation affects the overall quality of life of the patient, and this could lead them to isolate themselves from recreational and social activities.

Further, this can affect the forms and lines of treatment provided to the patient. Ultimately, this will lead to less adoption of bowel irrigation devices, restraining market growth to some extent.

Why is the U.S. Bowel Irrigation Systems Market Expanding?

“Rising Incidence of Inflammatory Bowel Disease in the Country”

The U.S. accounted for around 88.3% share in the North America bowel irrigation systems market in 2021 and is expected to showcase a similar growth trend over the forecast period as well.

The market in the U.S. is expected to register attractive growth owing to the increasing aged population and surge in awareness about bowel irrigation equipment.

Will Germany Be a Lucrative Market for Bowel Irrigation System Providers?

Germany held around 23.4% share of the Europe bowel irrigation systems market in 2021, owing to enhanced digitization of healthcare processes and a rise in the incidence of bowel dysfunction in the country.

Various epidemiological studies state that there is a high adoption rate of bowel irrigation systems since there is a high prevalence of constipation, faecal incontinence, and neurogenic bowel dysfunction in Germany.

How is China Emerging as a Prominent Market for Bowel Irrigation Systems?

China held the largest market share of 44.9% of the East Asia bowel irrigation systems market in 2021 due to the rising incidence of inflammatory bowel disease owing to differences in the living conditions and dietary habits of the population.

In the last few decades, many research groups in China have conducted prospective cohort studies which demonstrated that dietary habits play an important role in the development of colorectal cancer and inflammatory bowel disease. China is the world’s largest meat consumer and accounts for nearly one-third of total meat consumption.

As such, demand for bowel irrigation systems in China is bound to showcase an upward trend over the coming years.

The reason for this is their great importance in aiding patients’ ease as the catheter is easily retained in the rectum while water is being instilled. This is the best option for patients who require a large amount of water for bowel irrigation.

Therefore, bowel irrigation system usage is higher through balloon catheters as compared to other products, and is expected to drive its demand in the future, globally.

Adult patients accounted for the highest share of 75.4% of revenue in the bowel irrigation systems market in 2021. Prevalence of faecal incontinence and bowel dysfunction disorders is higher in the elderly population as compared to those below 18 years of age.

As such, bowel irrigation systems are more widely used by adults because they are more prone to neurological disorders that lead to faecal incontinence.

Consolidation activities such as product launches, acquisitions, collaborations, and partnerships are actively looked upon in this market. Such consolidations will help market players expand their product portfolios and market penetration, thereby increasing their revenue share in the market.

What is the global bowel irrigation systems market size?

The global bowel irrigation systems market is valued at US$ 322.9 Mn.

What is the sales forecast for bowel irrigation systems through 2032?

What was the last 5 years’ market CAGR for bowel irrigation device sales?

Which countries are prominent consumers of bowel irrigation systems?

The U.S., China, Germany, U.K., and Japan drive the most demand for bowel irrigation products and currently hold 49.3% market share.

What is the U.S. bowel irrigation systems market stance?

The U.S. accounted for around 88.3% share of the North American regional market in 2021.

Who are the top 3 manufacturers of bowel irrigation systems?

China held a share of 44.9% in the East Asia bowel irrigation systems market in 2021, while Japan accounted for 39.8% market share.

Global rare disease treatment market covers a detailed segmentation in which the segment is poised to grow at a moderate pace at US$ 56 bn market valuation by 2025 end.

Global market for leadless pacing systems is estimated to be valued at US$ 29.4 Mn in 2017 and is projected to grow at a CAGR of 10.0% during the forecast period.

Global hemoglobinopathy market is projected to register a CAGR of 8.3% during the forecast period in terms of value and is expected to reach a market valuation of US$ 788.2 Mn by 2024 end.