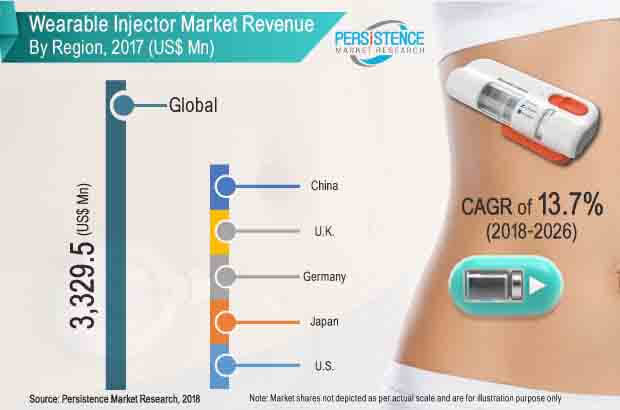 The growth of the global wearable injector market is mainly driven by high prevalence of diseases such as diabetes, cancer, cardiovascular diseases and advancement of technology with tracking devices, which can monitor the health of the patient. Furthermore, increasing demand for less or painless devices is also expected to surge the growth of the market for wearable injectors.

The global wearable injector market has been segmented on the basis of regions into North America, Latin America, Europe, and Asia Pacific excluding Japan (APEJ), Japan and Middle East & Africa (MEA). In terms of revenue, North America is projected to be the dominant regional market for wearable injectors throughout the forecast period as manufacturers in the region are developing products that have the potential to treat diseases, such as diabetes, beforehand with transmitters, which transmit the drugs during the high or low levels of insulin in the body, and sensors, which alerts the patients about it. Latin America and APEC are expected to witness significant growth during the forecast period as numerous research and development activities are been carried out for rapid drug delivery by wearable injector devices. U.S.  dominates in North America market due to a large patient pool suffering from diseases such as diabetes and cancer. The U.S., Japan, Germany, the U.K. and China contribute a major share in the global wearable injector market.

A large number of players operating in the wearable injector market are focused on entering into collaborations and partnerships with local distributors and retailers in order to enhance their market presence globally. Moreover, it also enables companies to increase product visibility across different regions.

This Persistence Market Research report examines the Wearable Injector Market for the period 2018 – 2026. The primary objective of the report is to offer updates and insights regarding the various market opportunities in the global wearable injector market.

Prevalence of chronic diseases such as cardiovascular diseases, diabetes, and arthritis is increasing rapidly, which will require self-administration in cases of emergency. Moreover, the wearable injectors measure the dosage a patient requires and reduce the risk of needle stick injuries. Appropriate amount of drug can be delivered to the patient at appropriate time by using wearable injectors without the involvement of healthcare professionals. The shortage of healthcare professionals, such as doctors and nurses, is expected to upsurge the demand for wearable injectors over the forecast period. The growth is expected to be noticeable in the diabetes indication segment. Furthermore, the wearable injectors have been manufactured for the treatment of cardiovascular diseases and cancer treatments. Amgen manufactures Repetha, which is responsible for lowering the LDL (Low-density lipoprotein) in patients suffering from Heterozygous Familial hypercholesterolemia (HeFH ).

To provide an accurate understanding and to assess the opportunities in this market, the report is categorically split under three sections, namely market analysis by product type, distribution channel and regions. The report analyzes the global wearable injector market in terms of market value (US$ Mn).

The report starts with an overview of wearable injector and its usage in regions across the globe. In the same section, PMR covers the wearable injector market’s performance in terms of revenue. This section includes, PMR analysis of key trends, drivers and restraints from supply side and demand side perspective.

The next section of the report analyzes the global wearable injector market based on regions and presents the forecast in terms of value for the next 8 years. The regions covered in the report include:

To arrive at market size, the report considers company share analysis for the majority of the companies, which include 60% share from the geographies. The forecast presented here assesses the total revenue of the wearable injector market. When developing the market forecast, the starting point is sizing the current market, which forms the basis for the forecast of how the market is expected to take shape in the near future. Given the characteristics of market, we have triangulated the outcome based on different analysis based on supply side, demand side and GDP growth rate. However, quantifying the market across aforementioned segments and regions is more a matter of quantifying expectations and identifying opportunities, rather than rationalizing them after the forecast has been completed.

In addition, we have taken into consideration year-on-year growth to understand the predictability of the market and to identify the right opportunities across the market.

As previously highlighted, the market for wearable injectors is split into various sub-segments based on region, product type and distribution channel. All these sub-segments or categories have been analyzed to understand individual segments’ relative contribution to the growth. This detailed level of information is important for identification of the many key trends in wearable injector market.

Also, another key feature of this report is the analysis of wearable injector market by regions, product type segments and distribution channel. Its revenue forecast in terms of absolute dollar value. This is traditionally overlooked while forecasting the market. However, absolute dollar opportunity is critical in assessing the level of opportunity that a provider can look to achieve, as well as to identify potential resources from a sales perspective.

Furthermore, Persistence Market Research has developed market attractiveness index for all three segments – regional, product type and by distribution channel segments. This index helps in identifying the real opportunities available in the market.

In the final section of the report, the wearable injector market landscape is included to provide report audiences with a dashboard view, based on categories of providers across the market, presence in wearable injector product portfolio and key differentiators.