Torque sensors are devices that are used for measuring the torque of rotating systems such as electric motors, engines, gearboxes, craft shifts, etc. Torque measurement and monitoring is an important parameter as far as all machines and engines are concerned.

The global torque sensor market is expected to witness significant growth over the forecast period of 2020 to 2030, due to emerging applications of torque sensors, increasing demand for precise torque measurement technology, and high demand from the automotive application segment.

On the other hand, technological challenges due to diversity in the application of torque sensors is expected to be a major restraining factor for the expansion of the global torque sensor market size during the forecast period of 2020 to 2030.

If the force generated along with torque is reduced, the safety of machines and operations can be significantly enhanced. Technological advancements in torque sensors have resulted in improvement in performance, accuracy, and reliability, while ensuring enhanced safety. 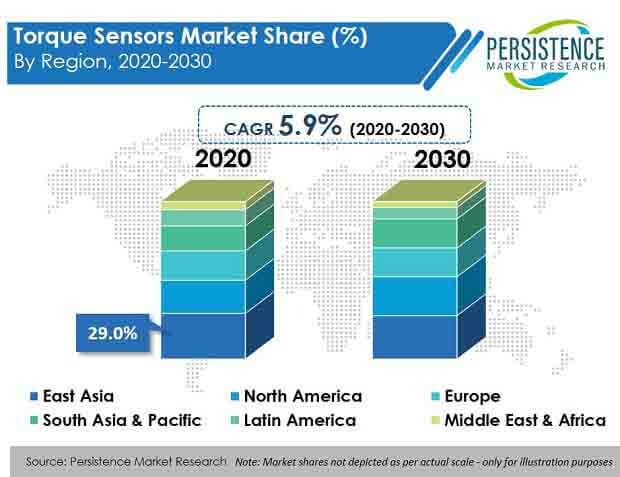 East Asia holds a major global torque sensors market share of around 29%, and the region is expected to retain its dominance throughout the forecast period. The market in North America holds the second-largest share, and is expected to expand at the highest CAGR of nearly 8% through 2030. Europe and South Asia and Pacific follow next with decent sales of torque sensors.

Lagging adoption in the manufacturing industry is likely to suppress market growth. Nationwide lockdowns across the globe due to the COVID-19 pandemic have forced end users in the manufacturing industry to operate at minimum workforce attendance, which has consequently lowered production efficiency and procurement budgets. These factors are set to hamper the growth of the torque sensors market in the near term.

The global torque sensors market is set to witness steady growth at a CAGR of around 6% over the forecast period of 2020 to 2030. Stakeholders in this market space can look to Asia and North America for increasing their sales and profits over the coming years. Rotary torque sensors will experience a bulk of the demand pie, which is something manufacturers can look to capitalize on in the near future.

The digital adult content market is expected to expand its roots in the global market at a promising CAGR of 16.2 % between 2022 and 2032..