Increasing commercial manufacturing of biopharmaceuticals along with academic biotechnology research & development activities is creating huge opportunities for single-use bioprocess systems. Besides, the advantage of lower cross-contamination chances of using disposable bioprocess products increases the demand for single-use bioprocess systems. Leading biopharma companies are focusing on strengthening their product reach in different countries across the world through various distribution channels. Some companies are focusing to collaborate directly with academic institutions to enhance their industrial research activities in single-use bioprocess system development. On the other hand, few players are focused to modify & to develop a strong product portfolio by launching new innovative products in the global market.

Drug developers and biopharmaceutical manufacturers are constantly looking forward to the development and production of biosimilars. Increasing government initiatives for continuous biosimilar manufacturing in large amounts to meet growing patient needs has led to a surge in demand for single-use bioprocess systems.

According to Persistence Market Research’s analysis, single-use bioprocess system sales have grown at 14% CAGR over the past 5 years.

Further, increasing biotechnology research & development activities around the globe are also expected to accelerate demand for single-use bioprocess systems during the forecast period. Leading biopharmaceutical companies are also looking forward to establish their manufacturing plants in emerging countries of the world, such as India and China, where the cost of production is comparatively low, due to which, production capacity can be increased with comparatively lower investments. These developments present a positive growth outlook for the market, which is expected to expand at close to 20% CAGR through 2030.

For instance, according to WHO, globally, the number of deaths from cancer will continue to rise and reach around 13.1 billion by 2030. It also suggests that, global cancer prevalence will increase by around 75% from 2008 to 2030. A rapid growth in incidence of cancer across the globe will lead to increased number of patients who will undergo cancer management and treatment. This, in turn, would increase demand for biologics, thereby driving the expansion of the single-use bioprocess systems market size over the coming years.

Why are R&D Investments Key to Single-use Bioprocess Systems?

Manufacturers are also keen on investing in innovation and products that address key recycling challenges, such as recycling of multi-layer containers and bags that comprise base material plastic and barrier material. Segregation of multi-layer flexible vessel storage solutions is increasingly being observed as a key issue in the sustainable bioprocessing ecosystem. However, growing trend of sustainable single-use bioprocess products is expected to result in market players investing in research & development targeted at sustainable solutions.

What is the Commercial Potential of Disposable Bioprocess Technology?

Use of stainless steel reusable bioreactors in conventional bioprocessing systems has a lot of disadvantages. Introduction of single-use bioprocess systems having advantages of reduced contamination, no cleaning efforts and sterilization need, and potential cost savings as compared with those of traditional stainless steel mixers is a factor expected to drive market growth. Use of disposable products for bioprocessing application enhances upstream and downstream processes with better safety, sterility, and reliability.

What is the Impact of Expansion of Bioprocess Facilities by Key Manufacturers on the Market?

Majority of companies are expanding their existing services in untapped regions to maintain or gain market share. Substantial investments in the expansion of single-use bioprocess product manufacturing facilities is one of the major trends among key players in the global market. Leading companies are looking forward to holding a strong position in the international market by opening new product distribution facilities. 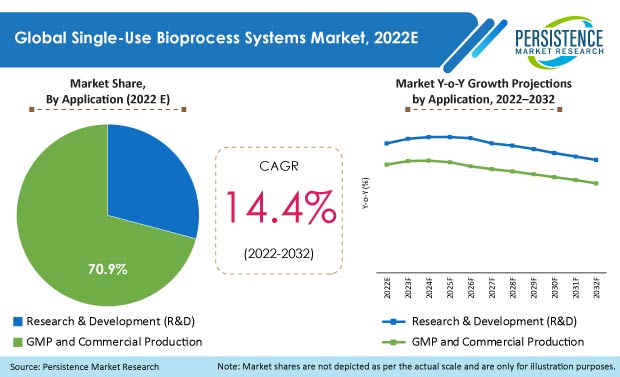 Why is there Huge Opportunity for Single-use Bioprocess Systems in the U.S.?

Persistence Market Research has projected North America to remain as one of the most lucrative markets throughout the forecast period. One of the key factors supporting expansion is the U.S’s high spending in healthcare. As per forecasts by CMS’ Office of the Actuary, overall healthcare spending has increased faster  at around 4.6% in 2019 than the overall economic growth of 4.0% in the United States measured by Gross Domestic Product (GDP) in 2019.

Furthermore, the U.S. remains one of the largest markets biopharmaceuticals in the world, which invariably makes it a lucrative pocket for single-use bioprocess system manufacturers. According to the CRS report, annual cost of some biologic medications in the U.S., such as Vimizim (elosulfase alfa) and Soliris (eculizumab), exceeds US$ 250,000 per patient. Further, in the U.S, spending on biologics was totaled at around US$ 120.1 Bn in 2017, a 12.5% increase over 2016, which is indicative of remarkable scope for the expansion of product portfolios and services for key single-use bioprocess system market players.

High per capita healthcare spending and favourable healthcare policies have created a conducive environment for the adoption of single-use bioprocess systems in the U.S. Also, the presence of leading players such as Thermo Fisher Scientific and Danaher Corporation is supporting growth in the U.S. Key business strategies followed by these companies include product launches and expansion plans, which will continue aiding overall expansion in the U.S.

How is the Presence of Key Market Players Shaping the German Single-use Bioprocess Systems Market?

Rise in biopharmaceutical and biotech companies in large numbers is expected to accelerate single-use bioprocess system sales in Germany. Further, the presence of three big single-use bioprocess systems market players such as Sartorius AG, Merck KGaA, and Eppendorf AG is also supporting market expansion. According to data from Statista, the number of dedicated biotech companies in Germany was 593 in 2015, which increased to 679 in 2018.

China is known for its high export activities of biopharmaceuticals and Active Pharmaceutical Ingredients (APIs) for chemical drugs. Presently, China exports almost five types of biopharmaceutical products such as therapeutic antibodies, bio-chemicals, vaccines, recombinant insulin, and blood products. China is considered as the second-largest market for pharmaceuticals. Manufacturers in the West are moving toward China and looking for large-scale investments to expand their bioprocess business in the country.

How are Government Initiatives Boosting Single-Use Bioprocess Systems in India?

The bioreactor segment will continue accounting for around half of the global share among components through the forecast period. According to Persistence Market Research, the segment is expected to hold around 45% of the market, in terms of component, in the year 2020. Single-use bioreactors offer greater precision and straightforward usage, along with having low cross-contamination chances, which are the leading factors behind the dominance of this segment.

Increasing use of bioreactors in cell culture and fermentation processes to reduce manufacturing time, ensure safety, and make do with low capital investment are major factors behind the high revenue share of the segment.

Why Does GMP and Commercial Production Hold High Share?

Accounting for around 72% of overall market share through the forecast period, GMP and commercial production continues to account for bulk use of single-use bioprocess systems. Growing adoption of single-use bioprocess systems by the pharmaceutical industry for continuous manufacturing is likely offering impressive growth to the market. Single-use bioprocess technology offers several advantages such as elimination of batch-to-batch cross-contamination, relatively low capital investment, reuse cleaning validation efforts, and greater flexibility to the GMP and commercial production of the biologics in large quantities.

Companies operating in the single-use bioprocess systems market are aiming at the strategic acquisition of medium and small manufacturers to expand their product manufacturing and address the demand of an expanding patient pool.

Manufacturers are also focusing on the expansion of their product portfolios by launching new technologically advanced products.

Q1. Which is the most lucrative market for single-use bioprocess systems?

The U.S. currently leads the global market for single-use bioprocess systems. Sales in the U.S will be around 29% of total demand over the forecast period.

Q2. Which is the top-selling single-use bioprocess system?

Bioreactors are highly sought-after in every market. Demand for bioreactors is expected to remain high in the near future, especially due to ease of usage and commercial demand for cell culture.

Q3. For which application is single-use bioprocess systems mostly used?

Q4. Which are some of the leading companies offering single-use bioprocess systems?

Persistence Market Research follows a methodology that encompasses the demand-side assessment of the market and triangulates the same through supply-side analysis. This methodology is based on the use of standard market structure, methods and definitions. Request a detailed methodology.

Persistence Market Research speaks to stakeholders across the spectrum, including C-level executives, distributors, product manufacturers, industry experts. For a full list of primary respondents, please reach out to us.

Global malignant mesothelioma market is estimated to represent close to US$ 160 mn, or more than 45% revenue share of the total market in 2017 and more than US$ 300 mn by 2025 end.

Global cell free protein expression market is projected to expand at a CAGR of 6.0% and market value is expected to increase to US$ 268.4 million by 2024 end.

Global non-invasive prenatal testing (NIPT) market size and forecast in terms of revenue and volume has been provided for the period 2012 to 2022 along with the CAGR for the forecast period.