The availability of specialty fats and oils and oil blends by leading manufacturers, as well as increased consumption of fortified edible oils among health-conscious consumers, is driving the demand for sesame oil. Additionally, awareness regarding the product’s health and skin benefits is rising, which is subsequently benefitting market players.

Moreover, rising consumer inclination toward natural and organic products has also increased the demand for ingredients such as sesame oil. The expanding food & beverage and cosmetics sectors across Europe and North America are creating high-potential opportunities for edible oil manufacturers in these regions.

As per this latest study by Persistence Market Research, the global market for sesame oil is expected to exhibit significant growth at a CAGR of 5.9% over the forecast period. 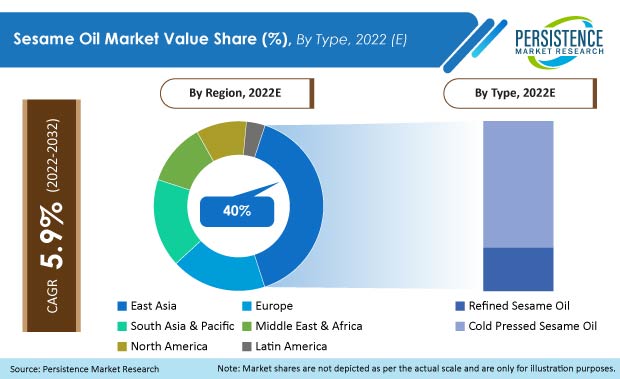 What are the Key Trends in the Market for Sesame Oil?

Sesame oil has proven its worth in industries as well as retail markets owing to its functional properties such as enhancing the health benefits of daily meals and baby food products, along with providing the perfect texture and flavor. Producers have been striving to improve and offer nutritionally enhanced sesame oil. Companies are also offering fortified sesame oil as a unique proposal to customers as it contributes to the additional functionalities of the oil.

Sesame oil manufacturers are offering specialized sesame oil along with avocados, chia seeds, and other natural ingredients to reduce the chances of heart disease by curbing cholesterols levels in the blood. Consumers are becoming more cautious about their health and are opting for a healthy lifestyle, which has driven such trends. Fortification also helps in improving the stability, sensory quality, and nutritional properties of cuisines from around the world.

As a result, sesame oil usage has been increasing steadily over the years and will continue to do so going ahead.

Sesame oil is mostly used to dress salads and provide them with a specific flavor and consistency, making them more delicious and appealing to the eye. An increasing number of health-conscious consumers who prefer salads with their meals has encouraged hotels and restaurants to serve salads by making them seem more appealing and nutritious at the same time, resulting in huge demand for salad oils in the hospitality industry. Sesame oil is widely used in margarine, which is a cheap substitute for butter and other fat-soluble spreads. Margarine is widely utilized as an ingredient in bakery products such as pastries, cookies, and donuts.

Global increase in the consumption of salad oils is attributed to rising income and population in developing nations, as well as fast-expanding food processing companies in Asia and other developing areas. Due to the strong and distinct flavor of sesame oil, it is widely used as a flavoring agent in the formulation of salad dressings, shortenings, and various kinds of margarine.

Sesame has a wide range of nutraceutical applications since it is rich in antioxidants and has health-improving properties. Sesame contains sesamolin and sesamin compounds, which are responsible for accelerating hepatic mitochondrial and peroxisomal fatty oxidation rates. Consuming sesame seeds is believed to boost vitamin E activity and plasma gamma-tocopherol, which are responsible for protection against cancer and heart disease.

Sesame oil is a pharmaceutical aid with nutritional, demulcent, and emollient qualities. It is used as a solvent for intramuscular injections. The oil was historically used in India as an antibacterial mouthwash to treat anxiety and insomnia, and in China as a treatment for toothaches and gum disease. Due to its high polyunsaturated fat content, sesame oil is also known to lower cholesterol.

Substantial negative effects of tree nut allergies have raised concerns regarding the global population’s vulnerability to sesame seeds, which are utilized as a raw material for sesame oil extraction. Sesame is often referred to as the ninth food allergen. Sesame allergy is estimated to be as common as soy and fish allergies. Sesame allergy is common in Europe and North America. Instances of severe allergic reactions are also recorded in some cases in these regions, especially among children. In certain countries such as the U.S., Middle Eastern countries, and others, sesame allergy is found to be prominent owing to the increasing consumption of customary foods containing sesame ingredients such as tahini sauce, baba ganoush, hummus, and others.

Which Countries are Prominent Sesame Oil Markets in the European Region?

Demand for sesame oil is rising steadily in the European market due to its functional properties, which make it an ideal ingredient for various applications in the region, such as cosmetics & personal care and food processing.

How is the Canada Sesame Oil Market Faring?

A prominent factor for the significant growth of the Canadian sesame oil market is its high utilization in the personal care industry as this oil exhibits antioxidant and soothing properties, making it perfect for use in cosmetics and personal care products. Sesame oil is also a rich source of minerals such as zinc, calcium, copper magnesium, and manganese, which repair scar tissue and regenerate new skin cells.

Which End Use of Sesame Oil Accounts for High Revenue Generation?

The market volume share of food processing in the sesame oil industry is around 35.9%, which is projected to reach 747,184 tons by the end of 2032 in the global market.

Why are Sales of Refined Sesame Oil Higher across the World?

Based on type, the sesame oil market is segmented into cold pressed sesame oil and refined sesame oil. Among these, refined sesame oil holds a major value share in the global market at 74.1% in 2022, as the refined form has a very light, barely noticeable flavor and is utilized in several types of bakery products.

Prominent manufacturers of sesame oil are focusing on technology and research and development, and are partnering with other market players to increase their brand value and revenue. Collaborating with other prominent players helps a company incorporate its technology and increase its brand presence, globally.

What is the global market value of sesame oil in 2022?

The global market for sesame oil is currently valued at US$ 4.12 Bn.

At what rate did the sesame oil market expand over the past years?

What is the Forecasted value for the sesame oil market for 2032?

What is the demand outlook for sesame oil?

The market is expected to offer an incremental opportunity of US$ 3.17 Bn by 2032-end.

What are the key trends in the market?

Rising consumption of convenience food and increased use of sesame oil in cosmetics & personal care products are key trends in this space.

Who are the top 5 manufacturers of sesame oil?

Which countries account for the highest consumption of sesame oil?

What is the European Sesame oil market stance?

What are the statistics for the U.S. & Russia sesame oil market?