North America is projected to hold the largest share of the global market throughout the forecast period.

What are the Demand Drivers for the Biomaterials Market?

Cardiovascular disorders are induced by smoking, high blood pressure, inactivity, high cholesterol, and other factors. Noncontagious diseases such as chronic respiratory sickness, diabetes, and heart attacks caused by hypertension are mostly to blame for the rise in the incidence of cardiovascular disorders.

Cardiopulmonary bypass systems, heart valves, stents, complete artificial hearts, vascular grafts, and pacemakers are examples of biomaterials that are utilized for the healing of diseased and damaged heart tissue.

Technological advancements have expanded the variety of biomaterials and their use in sectors such as bioengineering and tissue engineering.

The introduction of smart biomaterials is likely to present huge revenue-generation opportunities for the suppliers of biomaterials in the near future. Smart biomaterials connect with biological systems for a variety of biomedical applications, spanning bioactive molecule transport to the cellular functioning of designed functional tissues. 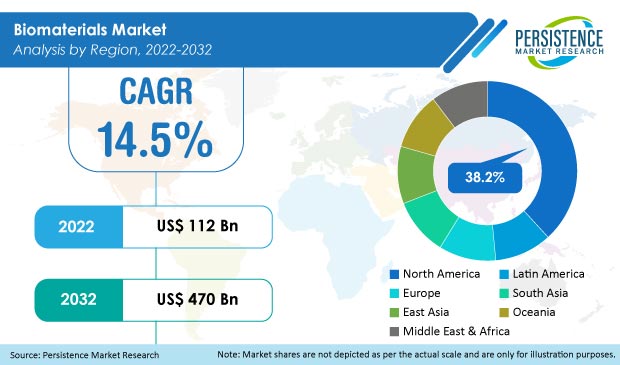 North America is set to dominate the global biomaterials market during the forecast period due to numerous private and public initiatives.

As a consequence, the use of biomaterials has skyrocketed in the region. Furthermore, favorable government regulations and the presence of numerous prominent market players are projected to promote biomaterials market growth in North America.

Asia Pacific is expected to follow North America in terms of revenue share. This is due to a variety of aspects, including the region's aging population, which is boosting the need for surgeries amid the rising incidence of bone fractures.

Leading players in the biomaterials market are pursuing numerous strategies such as agreements, collaborations, and R&D activities to expand their product portfolio.

A biomaterial is any substance or combination other than drugs that may be synthetic or natural in origin. These materials can be used at any period, which replaces totally or partially any organ, tissue, or function of the body to enhance the life of the individual as stated by the American National Institute of Health.

The study of biomaterials is known as biomaterials science, which consists of elements such as biology, medicine, chemistry, and tissue engineering among others.

Biomaterials either occur naturally or are synthesized in the laboratory by using a variety of chemical approaches by using metallic components such as ceramics, polymers, or composite materials.

They often have medical applications and thus they have the ability to comprise a part or whole of the living structure or biomedical devices.

Some of the major focused activities for biomaterials include the development of new scaffolds for regenerative medicines, stem cell therapy, and biomaterials characterization and nonmaterial for biosensing applications.

Biomaterials engineering includes processing, synthesis, and characterization of novel materials such as glasses, polymers, cement composites, and hybrids among others.

In addition, the new area in which biomaterial activity is on the go is the tailoring of inorganic nanoparticles that include quantum dots with bioactive peptides and gold, which enables them to act as reporters to detect enzyme activity.

The biomaterials have a wide range of applications in dental, cardiovascular, orthopedic, wound healing, neurology, and surgery, among others.

The cardiovascular segment contributed substantially to the global biomaterials market, followed by the orthopedic segment. Owing to the developments, and changing lifestyles of people, the other segment such as plastic surgery and wound healing segments are expected to show the highest growth in the near future.

The global market for biomaterials is expected to expand at a CAGR of 14.5% through 2032.

North America accounts for over 38% share and is set to dominate the global biomaterials market going forward.