Demand for emulsion for beverages is growing with increased application in functional and non-alcoholic beverages. As per the report by Persistence Market Research, rapidly rising demand for non-alcoholic beverages, due to high disposable income among consumers, is expected to influence demand for emulsion for beverages from beverage manufactures. Pectin and gellan gum are predicted to be used as major sources for the production of emulsion for beverages, due to the additional benefits that they provide to end products. Ready-to-drink beverages such as tea and coffee are also gaining traction due to busy lifestyle and growing urbanization, especially in developing countries.

The report also gives detailed analysis of emulsion for beverage shipments across the world, what effect the COVID-19 pandemic has had on this sector, and what the coming years (2020 to 2030) will be like for the sales of beverage emulsifiers.

Does the Future Outlook Look Better Than Previous Years?

For instance, xanthan gum sales volume is projected to grow around 5% over the forecast period of 2020-2030. This promising sales growth will be mainly triggered by surge in demand for healthy and natural beverages. Emulsion for beverages offers additional features such as controlled release, protection, targeted delivery, and others, which are highly desired by beverage producers. As such, the emulsion for beverages market is set to reach a volume of 348,802 tons by the end of 2030.

Is Changing Lifestyle is Impacting Emulsion for Beverage Consumption?

Urbanizations and modernization in emerging economies have bolstered the growth of the food & beverage industry. There has been a visible change in the eating and drinking habits of consumers. Changing lifestyle, especially the millennial generation, is inducing drinking habits to a greater extent. Improvements in the economic conditions of various countries have led to increased disposable income and higher standards of living, which have contributed to rising trend of premiumization and consumption of alcoholic drinks & beverages. This is expected to have a positive influence on sales in the emulsion for beverages market. Manufacturers of emulsion for beverages are thus expected to find greater opportunities in the near future.

How is Rising Consumption of RTD & Functional Beverages Benefitting Sales of Emulsion for Beverages?

With a busy schedule, hectic lifestyle, and less time available to have healthy food and beverages, consumers have turned to readily-available healthy food & beverages more than ever. Manufactures are offering ready-to-drink beverages with additional nutrition, taste, color, and flavor, and this is contributing to the rising need for emulsion for beverages. Key players operating in the food & beverage industry are focusing on offering ready-to-drink healthy beverages to meet the ever-rising demand from consumers.

Technological advancements in the industry of packaging have led to an increase in the range of convenience food products. Rising inclination of consumers toward ready-to-drink beverages has played an important role in the growth of the emulsion for the beverages market. Emulsifiers are widely used in ready-to-drink as well as plant-based beverages, which is likely to increase demand over the forecast period. RTD tea/coffee is expected to see substantial growth over the coming years, and account for a high CAGR of around 6% among non-alcoholic beverages over the forecast period.

Why Will Clean & Clear Labeling Practices Promote Shipment of Emulsion for Beverages?

Growing consumer awareness regarding natural & artificial flavoring ingredients in food products is leading to the imposition of stringent labeling regulations across the globe. Widespread knowledge about the health hazards of artificial substances is leading consumers to be critical about ingredients. Growing concerns and moral beliefs about beverage consumption and allergies caused due to added substances are triggering manufacturers to follow labelling regulations more sternly. For maintaining transparency in labeling, manufacturers are including recognizable ingredients on labels that consumers can understand. Clean & clear labeling practices are being employed by leading manufacturers to add more value to their products, differentiate themselves from other brands, and attract health-conscious consumers across the globe.

Increasing demand for premium plant-based beverages is encouraging manufacturers to invest in ramping up production capacity for such segments. Extensive use of emulsifiers in a variety of popular dairy and plant-based drinks is expected to drive global sales of emulsion for beverages over the coming years. In order to meet increasing consumer demand and gain a competitive edge, manufacturers are developing innovative combinations of emulsifiers. Owing to increasing popularity of plant-based beverages, leading players are focusing more on their manufacturing, along with implementation of appropriate & effective marketing strategies to attract more stakeholders.

New product development is an integral part of the food industry, and predicting future trends and having the first product to market can give manufacturers a huge advantage against competitors. Changing components of a beverage to meet current demand is a struggle that manufacturers have to consider every day. Such demands include the removal of ingredients from current products that consumers perceive as undesirable, addition of desirable components, or replacement of expensive ingredients with inexpensive alternatives. With rise in demand for natural and organic products, especially from Europe and North America, key players are investing in innovate products.

Formulators are looking for stabilization of colors, flavors, texture, and micronutrients in beverages, as these ingredients are not soluble in water. There has been a rise in demand for multifunctional beverage emulsions that include features such as protection, controlled release, targeted delivery, and taste masking. Such beverage emulsions not only offer beverage manufacturers cost benefits, but also provide volume to the beverage with flavor or color with the use of a single emulsion only, rather than having to use two different beverage ingredients to enhance quality and taste.

Changing consumption patterns and continued demand for innovative beverages with newer colors and flavors are supporting growth in demand for emulsion for beverages across regions.

What are the Key Challenges for Emulsion for Beverage Manufacturers?

Consumers are becoming aware regarding chemical additives in food & beverages, and their adverse effects on the human body.  Chemical food additives are used as thickeners, stabilizers, and emulsifiers during the processing of food products to provide taste, flavor, and good appearance to them. Use of synthetic ingredients creates a cheaper, more stable product, but is also less attractive to many consumers, who, especially in developed countries, are favoring chemical-free ingredients and moving toward organic & natural options. Therefore, consumers’ negative perception toward synthetic additives is hampering market growth.

Leading beverage manufacturers are introducing stabilizer-free beverages to gain growing consumer interest in natural products that are free from additives. For instance, from Sep, 2018, Nestle SA eliminated emulsion stabilizers from two of its major milk brands in Brazil - Ninho and Molico - which represent milk for children and skimmed milk, respectively. The company invested around US$ 34.4 Mn for new technology that will enable the storing of milk for prolonged periods of time at room temperature, without any usage of stabilizer. 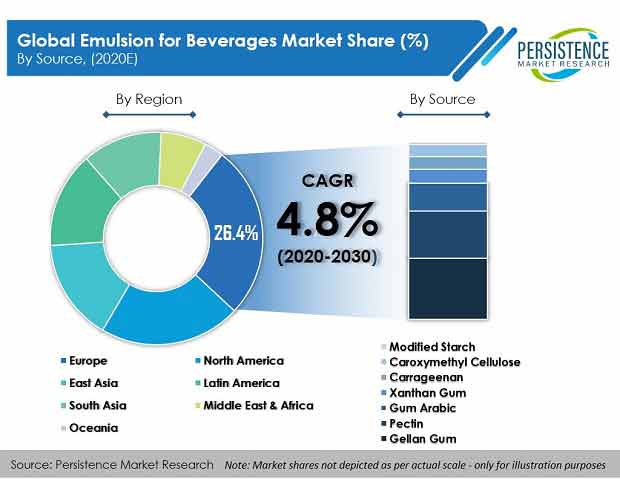 Until 2019, emulsion for beverages sales across the United States experienced a Y-o-Y growth of over 2.1%, to reach US$ 212.7 Bn. The market is set to acquire a sales volume of 45,645 tons in 2030. The main considerable factor is the presence of key players and increased acceptance of non-alcoholic beverages among the masses. According to the National Health and Nutrition Examination Survey, consumption of diet beverages and fruit beverages is increasingly growing among U.S. adults.

Will the U.K. Experience Increased Sales of Emulsion for Beverages?

U.K. emulsion for beverages sales are witnessing moderate growth, and sales volume is anticipated to reach 8,479 tons in 2030. The presence of a large number of health-conscious consumers in the country is contributing rising demand for healthy beverages such as fruit juices and functional beverages, which is boding well for market growth.

Will the Health-conscious Trend across Germany Boost Emulsion for Beverage Sales?

Germany’s emulsion for beverage consumption is anticipated to grow at 3.6% over the forecast period of 2020-2030, and to reach US$ 48.8 Mn in valuation by 2030. There has been an increase in the number of health-conscious consumers across the country. People are becoming more aware about the health hazards caused by the food & beverage products they consume. Availability of low-fat beverages produced with the help of emulsions are encouraging demand for beverage emulsions across Germany.

Will High Sales of Beverages in China Benefit Emulsion for Beverage Demand?

As a source, pectin is gaining popularity among beverage manufacturers, due to which, sales of pectin are anticipated to grow at 7.3%, which is highest among all beverage emulsifiers. Pectin contains numerous health benefits such as lowering cholesterol, reducing the number and duration of reflux episodes, preventing diarrhea, and many others. Pectin has also been highly utilized in functional beverages products. As such, demand for pectin emulsifiers for beverages is rising the fastest across regions.

Why are Non-alcoholic Beverages Becoming a Consumer Favorite?

Will Flavor Emulsions Dominate the Market in the Foreseeable Future?

Persistence Market Research has profiled the following prominent emulsion for beverage manufacturers in its report:

Global players in the emulsion for beverages market are focusing on offering clean-label and non-GMO emulsions. Manufacturers are providing customized value-added products targeting the requirements of end-use industries. Major focus of key manufacturers is to increase their market presence by following the merger & acquisition strategy.

Persistence Market Research projects the global emulsion for beverages market to register a CAGR close to 5% across the 2020-2030 assessment period. High prevalence of innovative beverage products is anticipated to drive growth in a positive direction.

As per Persistence Market Research’s projections, Europe is expected to pivot expansion, attributed to surging demand for emulsion for beverages in functional beverage products.

Yes, the emulsion for beverages report has been compiled by expert analysts of Persistence Market Research, through a combination of primary and secondary research. To know more about how the research was conducted, you can speak to a research analyst

Persistence Market Research follows a methodology that encompasses the demand-side assessment of the market, and triangulates the same through a supply-side analysis. This methodology is based on the use of standard market structure, methods, and definitions.

Global non-alcoholic beverages market is highly concentrated and projected to reach a valuation in excess of US$ 650 Bn by 2027 with a healthy CAGR.

Global Cold Pressed Juice Market report provides an outlook and sets the forecast within the context of the segments – by nature, by type, and by distribution channel.