Anti-Graffiti Coatings Market to Witness a CAGR of 4% through 2029, Finds PMR Study

Persistence Market Research’s new study on the anti-graffiti coatings market offers critical insights for the period 2019 to 2029. According to the insights from the report, the anti-graffiti coatings market is expected to witness steady growth over the forecast period 2019 to 2029 owing to the rising awareness regarding special-purpose coatings in developed countries. The market is expected to witness significant growth with a CAGR of over 4% through 2029. 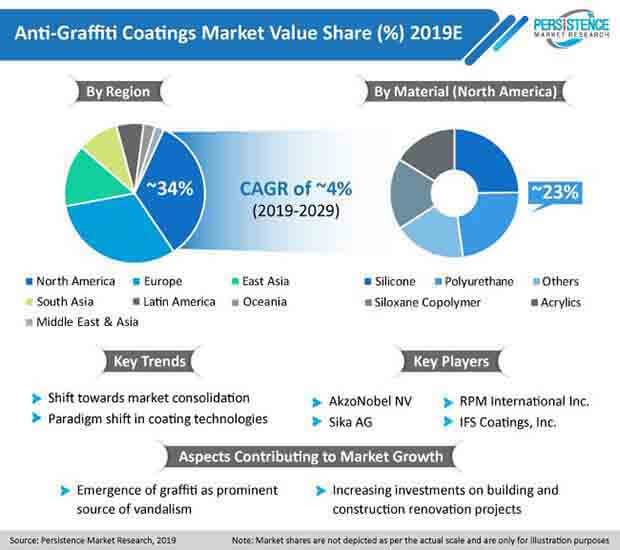 Manufacturers Likely to Witness Steady Growth in the US and Europe

The emergence of anti-graffiti coatings as a promising solution for undesired graffiti art over the walls of residential, institutional, and commercial buildings has resulted in a drastic increase in the sales in developed regions such as North America and Europe. The total costs of investments in graffiti cleaning and removal in these regions has grown significantly over the past couple of years. For instance, annual graffiti cleaning costs in Los Angeles are around US$ 140 Mn. In the countries of Europe, such as Germany and the UK, the annual costs of graffiti cleaning are over US$ 700 Mn and US$ 1.5 Bn respectively. This has resulted in high demand for cost-effective and long-lasting anti-graffiti coatings in the North America and Europe regions.

As a result, the North America and Europe anti-graffiti coatings markets are expected to grow at lucrative CAGR of over 4.5% over the forecast period 2019 to 2029.

The subject of graffiti still remains as a controversial topic as it is also a major form of vandalism besides being a source of statement and self-expression. Over the past years, graffiti art has been adopted as a prominent source of expression by vandals across various geographies. Consequently, the demand for anti-graffiti coatings has increased, and this is expected to drive the growth of the global anti-graffiti coatings market.

For additional insights, write into media@persistencemarketresearch.com