Anti-Graffiti Coatings - No Longer an Afterthought in Protective Maneuvers

The paints and coatings landscape, like any other industry, has witnessed a series of innovations adapting to dynamic customer specifications. From decorative requirements to functional uses, paints and coatings have been serving a myriad of needs coming from a diverse range of applications. However, the demand for functional coatings has been consistently on the rise, with residential, commercial, and transportation segments at the forefront of this demand.

As property exteriors continue to bear the brunt of damages caused by natural events or deliberate attempts of defacement, the owners remain keen on investing in a wide range of solutions for protection, ranging from sturdy fences to intrusion detection technologies. However, the trend of property exteriors being used as canvases to convey messages, commonly termed as graffiti, introduced another aspect for consideration in the spectrum of paints and coatings. Though graffiti has emerged as one of the most powerful modern art forms, unwanted scribbling in the name of graffiti resulted in ‘visual litter’, thereby lowering the value of target exteriors and properties alike. 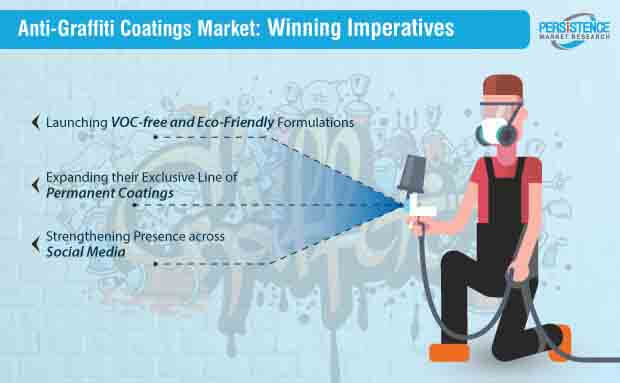 Consistent efforts to stave off unwanted graffiti activities are likely to pick pace, giving impetus to growth of anti-graffiti coatings market in 2019 and beyond. As ‘anti-graffiti coatings’ have outgrown the phase of being an ‘afterthought’, Persistence Market Research (PMR), in its recent research study, sheds light on underlying opportunities and challenges in the market that would help the key stakeholders in effective decision-making.

Anti-Graffiti Coatings - Chartering the Evolution, and the Road Ahead

Though anti-graffiti coatings have been around for the last four decades, it’s only in the recent past that they are being considered as a ‘must-have’ in property protection apparatus. For many years, anti-graffiti coatings weren’t being seen in the right light, as property owners used to rely on tall fences and CCTV cameras to track graffiti vandals. However, these techniques turned out to be impractical in terms of efficacy and called for functional anti-graffiti coatings to take the front seat.

Considering the high costs of graffiti removal, both in terms of specialized consultation and cleaning services, property owners started investing in anti-graffiti coatings as an effective deterrent to such vandalism, and this trend is likely to get stronger year after year. In 2018, the anti-graffiti coatings sales were recorded at ~ 41,339 tons.

Manufacturers active in the anti-graffiti coatings market are vying to keep up with this trend by making extensive use of nanomaterials, such as nano-silver, photo-catalytically active nano-titanium dioxide or nano-silica dioxide, and others, in order to refine quality, boosting water repellency, enhancing scratch resistance, and improve the anti-microbial properties.

‘Low-VOC’ and ‘Eco-Friendly’ to Enhance the Degree of Marketability

Increasing number of stringent regulations put in place for curbing harmful emissions and massive shift towards non-hazardous formulations are two among the key factors boosting adoption of ‘low-VOC’ and ‘eco-friendly’ anti-graffiti coatings. This increase in demand for low-VOC and eco-friendly coatings is, in turn, enhancing the visibility of water- and powder-based formulations over the solvent-based ones, encouraging manufacturers to include a new line of environment-friendly coatings for a wide variety of substrates.

As end users continue to lean toward permanent anti-graffiti coatings over the temporary and semi-permanent ones, manufacturers are focusing on ramping up production of permanent anti-graffiti coatings to meet the increasing demand. Manufacturers active in the anti-graffiti coatings market are also focusing on social media channels to boost their customer outreach, as social media not only offers an avenue for boosting customer engagement but also influencing their purchase decisions. For instance, in 2016, the Sherwin-Williams Company launched its official YouTube channel featuring videos that demonstrate the effectiveness of functional coatings.

across North America and Europe, which is key reason warranting lucrative growth aspects in these two regions. Leading players operating in the anti-graffiti coatings market will continue to focus on strategic mergers and acquisitions as a focal point, to gain competitive advantages and influence supply chains. For instance, in 2017, the Sherwin-Williams Company completed its official acquisition of Valspar Corporation, a leading manufacturer of paint and coatings, in order to strategically outperform in the anti-graffiti coatings market.

Author(s) of the PMR study on anti-graffiti coatings market maintain a buoyant outlook on the future growth prospects of anti-graffiti coatings market, prominently across the developed economies. The authors of the report opine that manufacturers will need to make a shift from the concept of ‘one-size-fits-all’ to an approach of ‘exclusively-for-you’, wherein they will develop tailor-made offerings in sync with the specific end-user requirements.

The report on the global anti-graffiti coatings market by Persistence Market Research (PMR) offers critical insights pertaining to the market for the forecast period of ten years from 2019 to 2029. It provides an overview of the market at global level, which includes the dynamics of the market. These market dynamics consist of factors that are expected to drive or restrain the growth of the global anti-graffiti coatings market over the forecast period. The market dynamics also include prominent trends followed by the key manufacturers and consumers of the global anti-graffiti coatings market. Besides the qualitative information, the report provides market value (US$ Thousands) and volume (Tons) for the past period of four years (2014 to 2018), along with estimated projections for the next ten years (2019 to 2029).

From the findings of the global anti-graffiti coatings market report, the market was valued at more than US$ 136 Mn in 2018. This value is expected to surpass US$ 200 Mn by the end of the forecast period 2029, while expanding at a value and volume Compound Annual Growth Rates (CAGR) of more than 4.0% throughout the forecast period.

Widespread Application of Anti-Graffiti Coatings for the Protection of Residential, Institutional, and Commercial Properties

It is estimated that the global consumption of anti-graffiti coatings for the protection of residential, commercial, and institutional building will increase significantly over the forecast period. This is majorly driven by the growing awareness towards the applications of anti-graffiti coatings in regions such as North America and Europe where issues pertaining to vandalism and graffiti are prominent.

The number of projects for the cleaning and removal of graffiti has been increasing significantly. Moreover, population in regions such as North America and Europe is more concerned about the protection of building walls from any kind of undesired graffiti or vandalism. As a consequence, the amount of costs involved in the cleaning of graffiti are significantly high in North America and Europe. These factors are expected to positively impact the growth of the global anti-graffiti coatings market.

The number of mergers or acquisitions among the abovementioned and other key players of the anti-graffiti coatings market has been significant over the past four years. Furthermore, these players are highly focused on the adoption of technologically advanced products and the production of a diversified product portfolio of anti-graffiti coatings.

Key Questions Answered in the Report

Anti-Graffiti Coatings Market- What are the Additional Questions Answered in the Market Study?

The research methodology employed for the anti-graffiti coatings market report is a two-staged process- primary and secondary research.

The primary phase in the anti-graffiti coatings market involves interaction with the key market stakeholders, such as manufacturers, distributors, retailers, and others. In the secondary research phase of the research methodology employed for anti-graffiti coatings market report, extensive study of sources available online, including white papers, research publications, case studies, company websites, and other sources.