Sales of RTD alcoholic beverages are rising due to increasing popularity among gen-Z and millennials, as RTD is a convenient drink as compared to other spirits.

Manufacturers’ effort in offering high-quality RTD alcoholic beverages in sweet, tropical fruit, berry, and mixed fruit flavors that have a touch of spirit is the major driver that is expected to propel demand over the forecast period of 2020 to 2030.

The report also talks about the factors responsible for rapid growth across South Asia and East Asia, and also analyzes the impact COVID-19 has had on the alcoholic beverage market in general, and demand for RTD alcoholic beverages in particular.

Why are Future Projections for RTD Alcoholic Beverages Brighter than Historical Trends?

Overall, the RTD alcoholic beverages market is expected to expand even faster over the coming years, at a CAGR of close to 8% through 2030.

In recent years, consumers have become more informed than ever. Increasing urbanization, pollution, and busy lifestyles are affecting the health of consumers across the world. Owing to that, consumers are seeking alcoholic products with natural ingredients and low alcohol content.

The RTD alcoholic beverage category is becoming increasingly competitive. Hence, to gain an advantage over their peers, manufacturers are focused on innovation and strive to launch new products in the premium category along with seasonal products.

Besides, manufacturers are focusing on the development of new products using unique flavors and blends, along with premium alcohol as a base spirit, which is popular among consumers.

Will Convenience Offered by RTD Alcoholic Beverages Over Traditional Spirits Mark an Opportunity for Manufacturers?

Beer and soda are no longer the only beverages that come in cans. Canned wines, hard seltzers, and RTD cocktails have all become mainstream. They give consumers the ease of drinking their favourite products at the location of their choice and with the instant satisfaction they’ve come to expect.

RTD alcoholic beverages offer the grab-and-go convenience that fits into busy, yet healthy lifestyles. Besides, they offer more sensory taste and flavor compared to traditional drinks such as beer and ciders. Also, these are premixed with unique cocktails under the observation of experts in the alcohol beverage industry. These factors are creating huge opportunities for key manufacturers of RTD alcoholic beverages across regions.

What are the Challenges Faced by RTD Alcoholic Beverage Manufacturers?

These processes take a long time and require several legal documents, which restricts the overall growth of the global RTD alcoholic beverages industry.

The most obvious example of an area of regulation that is particularly complex and burdensome is alcohol tax. There are different tax rates across various categories of alcohol. In some countries, alcohol tax is as high as 70% of the price of the bottle, and it starts from at least 30%. Apart from taxes, custom duties are also high in many countries, which puts additional burden on manufacturers. 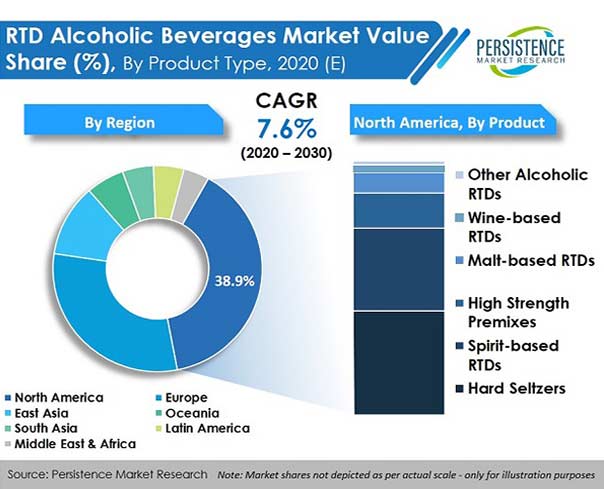 Why is More than 25% of Global Market Share Accounted for by the U.S.?

However, in the last three years, consumption of RTD beverages in the U.S. has increased dramatically owing to their convenience and flavor profiles. Hard seltzer is a relatively new type of alcoholic beverage that has seen rapid growth in popularity and demand in recent years in the country.

Seltzers are emerging as an alternative to beer and cider products. According to the Mark Anthony Group of Companies, consumption volume of beer in the U.S. has reduced 3% to 4% in the last two years, and the seltzer category has witnessed a growth of around 200% in 2019-2021.

Why Does the U.K. Hold the Highest Value & Volume Share in Europe’s RTD Alcoholic Beverages Industry?

Hard seltzer, spiked seltzer, or hard sparkling alcohol water is a type of highball drink containing carbonated water, alcohol, and often fruit flavoring. This is one of the simple and light premixed alcoholic beverages. Alcoholic seltzers are emerging as an alternative to beer and ciders due to their simple and natural ingredients and flavoring.

How is the Travel Retail Sector Fuelling Demand for RTD Alcoholic Beverages?

Travel retail is one of the fastest-growing industries across the globe, and is anticipated to play a significant role in the demand growth for alcoholic beverages. This is attributed to the fact that more than 1 billion tourists cross international borders every year.

The primary objective of the global sweet potato fries market report is to provide insights regarding opportunities in the market that are supporting the transformation of global businesses associated with sweet potato fries..

Extruded products market has witnessed substantial growth in the past few years, and this growth is expected to continue increasing throughout the forecast period of 2019-2029..

Ready To Use Therapeutic Food Market

Ready to Use Therapeutic Food Market is slated to reach over US$ 617 Mn by the end of 2024. The market is expected to observe exponential growth at a robust CAGR of around 10.5% over a seven-year forecast period, 2017-2024..