Non-alcoholic beverages are fast gaining popularity in Asia Pacific, owing to a growing consumption of tea and coffee in the region, particularly in countries like India. The consumption of non-alcoholic beverages in Asia Pacific stood at 200 Bn liters in 2016 and this is expected to increase to 301 Bn liters by the end of the forecast period in 2027.

North America is a close second in terms of non-alcoholic beverages consumption, with a recorded 169 Bn liters in 2016 expected to increase to 256 Bn liters by the end of 2027. Consumers in North America are moving towards a healthier lifestyle and seem to prefer sports and energy drinks to keep themselves fit and hydrated through the day. This factor is primarily responsible for the boost in consumption of non-alcoholic beverages across the region.

In terms of volume CAGR, both Asia Pacific and North America are slated to witness a growth rate of 3.9% over the forecast period. The billion dollar global non-alcoholic beverages market is highly concentrated in these two regions, with Asia Pacific estimated to reach a market valuation in excess of US$ 650 Bn by 2027 end and North America anticipated to cross US$ 600 Bn towards the close of 2027. While Asia Pacific will register a value CAGR of 4.6%, North America will record 4.7% during the decadal study. 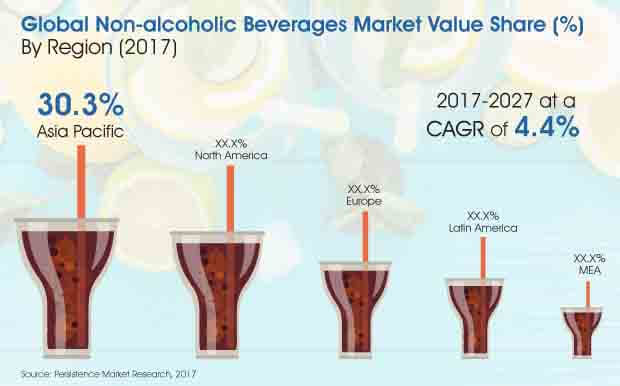 North America: Health conscious Americans are looking for healthy alternatives to traditional soda beverages and this has prompted non-alcoholic beverages manufacturers to launch innovative products such as cold-pressed juices, craft sodas, and other low-calorie beverages. New flavors of sparkling water and energy drinks are fast replacing soda beverages in the region. Also, North America is witnessing a rapid growth in the functional beverages segment. Beverages double up as guilt-free snacks, drinkable breakfasts, or even meal replacements. With consumers in North America demanding more nutritious, alcohol-free beverages, there has been a sharp rise in naturally produced functional beverages with inherent benefits such as blood sugar management, energy, refreshment, and immunity boosting properties.

Asia Pacific: The Asia Pacific region is witnessing an increased consumption of protein drinks, and this is not limited to just athletes and sportspeople. Women and senior citizens across the region are also showing an inclination towards protein drinks owing to health and wellness trends prevalent among the general population, especially among working women and the health conscious geriatric population in Asia Pacific. Further, there is a high preference for soft drinks among the young population in Asia Pacific. The APAC region supposedly offers the best income growth prospects in the world, and several young professionals from different parts of the world are moving to Asia Pacific for career prospects. This has fueled the demand for and consumption of RTD beverages and soft drinks as well as healthier functional beverages among the millennial working class.

The bubble tea market has witnessed substantial growth in the past few years, and this is expected to continue throughout the forecast period of 2019-2027. .

Carb alternatives is the latest trend that has become popular among consumers. The addition of cauliflower rice and mushotto, spaghetti in potato products is beneficial in reducing the number of carbohydrates. Since consumers prefer low-carb diets, manufacturers are developing new potato snacks with low fat and salt..

PMR's study report has revealed that majority of sugar alcohols will be used in the production of beverages. In 2017, more than US$ 240 Mn worth were sold with healthy CAGR.