The increase in digitalization and growth in the adoption of digital music is paving the trajectory for growth of the music streaming market. The market is moving ahead with the growth in penetration of the internet and smartphones. Both the content types, music streaming, and video streaming are witnessing high popularity across the globe. The surge in the number of service providers along with the presence of numerous subscription schemes is positively influencing the market growth. Major music streaming applications gaining demand in the market are Amazon music, Apple, and Spotify.

North America is expected to lead the global market in terms of growth owing to the high adoption rate of digital music and the availability of resources offering the advanced streaming experience to the consumers. Advanced data services such as 4g and fast broadband connectivity in the region also act in its favor. Regions such as China are exhibiting rapid market growth on the back of escalating adoption rate of applications such as Saavan and Gaana. 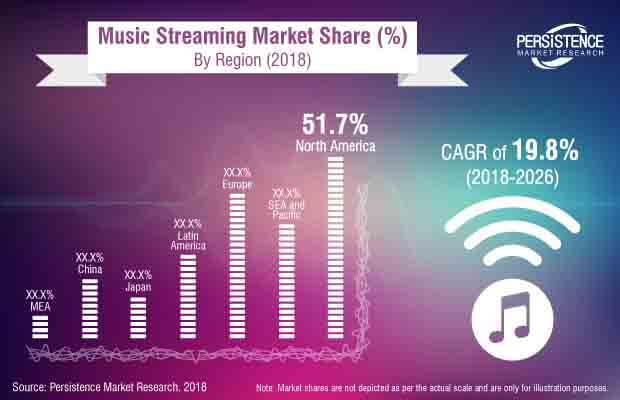 Increasing penetration of internet, and increasing adoption of smartphones and laptops complimented by the increasing volume of millennial population over the next decade and the transitioning consumer behavior with increasing digitalization, are expected to be the key driving factors for the global music streaming market.

Persistence Market Research (PMR) offers an 8-year forecast for the global music streaming market between 2018 and 2026. In terms of value, the market is expected to register a double-digit CAGR during forecast period. This study demonstrates the market dynamics and trends globally across seven regions: North America, Latin America, Europe, SEA and Pacific, China, Japan, and Middle East & Africa, which influence the current nature and future status of the music streaming market over the forecast period.

This research report provides a detailed analysis of the music streaming market and offers insights about the various factors driving the popularity of music streaming and their advantages. The report includes an extensive analysis of key industry drivers, challenges, market trends, and market structure. The market study provides a comprehensive assessment of stakeholder strategies and imperatives for succeeding in the business. The report segregates the market based on type of streaming, end-user, content type and different regions globally.

The next section contains a detailed analysis of the music streaming market across various countries in the region. It provides a market outlook for 2018–2026 and sets the forecast within the context of the music streaming market, which includes latest technological developments as well as offerings in the market. This study discusses key trends within countries contributing to growth of the market, as well as analyses the degrees at which drivers are influencing this market in each region. Key regions and countries assessed in this report include North America (U.S., Canada), Latin America (Brazil, Mexico, & Rest of Latin America), Europe (UK, France, Germany, Italy, Spain, Russia, & rest of Europe), SEA (India, Australia and New Zealand, ASEAN and Rest of SEA and Pacific), China, Japan, and MEA (GCC Countries, Turkey, South Africa, Northern Africa, & rest of MEA). This report evaluates the present scenario and the growth prospects of the music streaming market across various regions globally for the period 2018 –2026. We have considered 2017 as the base year and provided data for the remaining 12 months.

To offer an accurate forecast, we started by sizing the current market, which forms the basis of how the music streaming market will grow in the future. Given the characteristics of the market, we have triangulated the outcome of different types of analysis based on the technology trends.

As previously highlighted, the global music streaming market is split into a number of segments. All segments in terms of type of streaming, end-user, content type and different regions are analyzed in terms of basis points to understand the relative contributions of individual segments to market growth. This detailed level of information is important for the identification of various key trends in the global music streaming market.

In addition, another key feature of this report is the analysis of all key segments in terms of absolute dollar opportunity. This is traditionally overlooked while forecasting the market. However, absolute dollar opportunity is critical in assessing the level of opportunity that a provider can look to achieve, as well as to identify potential resources from a sales and delivery perspective in the global Music Streaming market.

In the final section of the report, we have included a competitive landscape to provide clients a dashboard view based on categories of providers in the value chain, their presence in the music streaming market, and key differentiators. This section is primarily designed to provide clients an objective and detailed comparative assessment of key providers specific to a market segment in the music streaming supply chain and the potential players for the same. Report audiences can gain segment-specific vendor insights to identify and evaluate key competitors based on the in-depth assessment of capabilities and success in the marketplace. Detailed profiles of providers are also included in the scope of the report to evaluate their long-term and short-term strategies, key offerings, and recent developments in the music streaming market. Some of the key market participants in the global music streaming market report include Apple, Google, Spotify, Deezer, Pandora, SoundCloud, JOOX, Amaon Music, iHeartRadio, and TIDAL.