Gallium is a soft silvery metal and is liquid at room temperature. During bauxite processing, caustic liquor is generated, and gallium is extracted from this as a by-product in impure form. The impure form is further refined to get pure gallium known as 6N Gallium. In some cases, it is recovered as a by-product from zinc processing. It is generally used in compound form, either as gallium nitride (GaN) or gallium arsenide (GaAs). These two compounds account for the major consumption of gallium worldwide.

Some of the key providers of gallium are GEO Gallium, Aluminium Corp of China Ltd, and Nalco, among others. 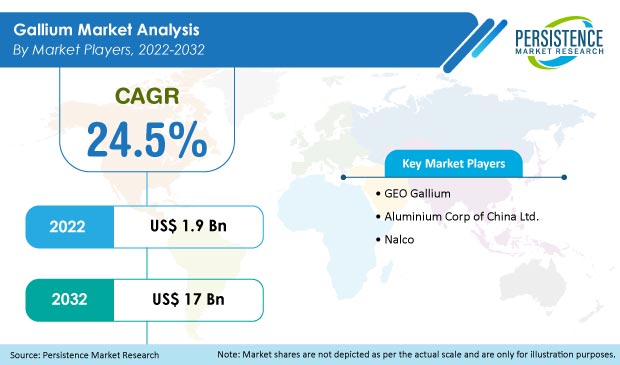 There is a noticeable increase in the number of electronic vehicles across the globe that further drives growth avenues in the gallium market. This growth is attributed to the capacities of GaN that enable automakers to enhance the driving experience, increase power density, improve cost efficiency, and reduce vehicle charging time.

Increased Use of Gallium in Electronics Sector

A growing number of R&D activities for specialty alloys will also increase the use of gallium. The major opportunity for the industry is the rapid growth in the electronics industry in India and China.

The prices of gallium are not fixed. This constant fluctuation in GaN prices is likely to create issues and restrain market growth. Moreover, some issues related to the recycling of gallium compounds that are used in several electronic products are also likely to limit expansion opportunities in the market over the coming years.

North America is estimated to hold the leading position in the global gallium market in the years to come. There has been a significant increase in the demand for gallium in the region due to rising sales of electronic consumer goods. Moreover, manufacturing other alloys and biomedical applications of gallium are also likely to serve as pivotal factors contributing to the sales avenues in the market.

European countries are predicted to see stable demand for gallium in the years ahead. The increasing demand from the semiconductor industry for gallium is anticipated to boost sales opportunities in South Asia & Pacific and East Asia.

The global gallium market is anticipated to surge ahead at a CAGR of 24.5% through 2032.

The current valuation of the gallium industry is US$ 1.9 Bn.