Newly-released data on the dibromo alkane market reveals that global sales are expected to reach a valuation of US$ 457.1 Mn in 2022, registering year-over-year growth of 3.5%. Projections are that the market will exhibit a value CAGR of 4.2% between 2022 and 2032.

Demand for dibromo alkane is expected to remain highly uneven across regions, with India and ASEAN countries witnessing a higher growth outlook as compared to established markets. The South Asia & Pacific region is expected to remain one of the fastest-growing markets owing to significant developments in specialty chemical and commodity chemical industries.

Sluggish demand during the historical period was mainly due to the pandemic crisis in 2020. However, recovery from the crisis in 2021 and 2022 has bolstered the growth outlook for the market for the projected period.

Rise in the demand for chemicals in key end-use industries such as pharmaceuticals, agrochemicals, etc., is expected to remain key growth drivers for the market over the forecast period, resulting in a CAGR of 4.2% between 2022 and 2032.

Demand for various categories of dibromo alkanes, such as dibromo methane, ethylene dibromide, 1,2-dibromoalkane, and 1,1-dibromoalkane, for application in organic chemical synthesis and utilization in the manufacturing of drugs & dyestuffs are expected to fuel market growth over the coming years. 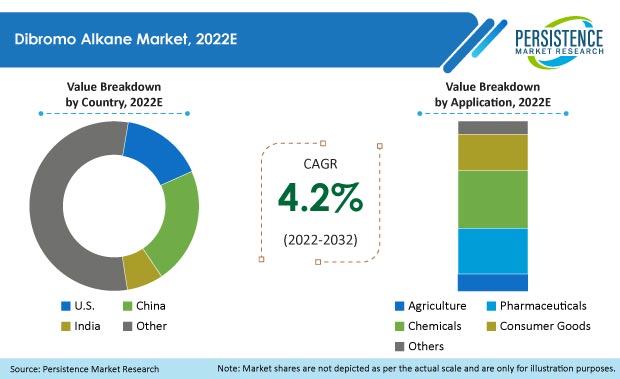 Image indicates prominent countries’ market share and their rankings, along with value share breakdown by application of dibromo alkane. China is estimated to dominate the global market, whereas, the chemicals segment will remain a key application area.

Which Factors are Shaping the Future of the Dibromo Alkane Market?

Usage of this chemical as a laboratory reagent is also expected to benefit the market owing to increasing investments in research and development. Several manufacturers, organizations, and institutions are investing a significant amount in research and development owing to its significant usage as a laboratory chemical. Research to decrease the number of steps involved is also anticipated to fuel the demand for dibromo alkane over the coming years.

Increasing stringency in regulations regarding the production and utilization of hazardous chemicals, especially in developed nations, has resulted in the shifting of the focus of leading players toward Asia Pacific, where there are less stringent regulations governing the chemical industry. Also, production cost in emerging countries is low as compared to developed countries.

Rise in the demand for dibromo alkane and its derivatives is being witnessed in the Asia Pacific region and BRICS nations owing to the growth of end-use industries such as specialty chemicals, dyes, pesticides, medicines & drugs, and others.

Due to the growing concerns regarding the ecosystem & health and production of food in a sustainable way, a transition in being witnessed from heavy reliance on chemical pesticides in recent years.

Food and agricultural organizations have advocated 'Integrated Pest Management' for the utilization of natural predators and bio-pesticides instead of chemical pesticides to minimize the harmful impacts of pesticides.

Several countries are focusing on alternative approaches to replace the application of chemical pesticides. This further requires government support, which becomes quite difficult due to system complexity, resistance from farmers, and substantial volume utilization.

However, owing to the rise in the requirement for alternatives is expected to hinder the consumption of dibromo alkanes over the coming years to some extent.

What is the Market Opportunity for Dibromo Alkane Producers in China?

China has witnessed substantial growth in manufacturing industries over the past decades. The country is also a prominent manufacturer and consumer of chemicals and specialty chemicals. Substantial development in industrial sectors, including chemicals, pharmaceuticals, agrochemicals, etc., is expected to create significant market opportunities for dibromo alkane suppliers in China.

China is estimated to create an absolute dollar opportunity of US$ 62.8 Mn by 2032. Significant development in end-use industries along with the strong presence of manufacturers has resulted in the dominancy of the country in the global market.

Will India Remain a Key Market for Dibromo Alkane Manufacturers?

India is witnessing significant growth in the industrial sector, where the chemical industry is gaining traction. The market for dibromo alkanes has been predominantly influenced by certain macro-economic factors and industrial factors, including economic growth, growth of the manufacturing sector, significant rise in medicine and drug manufacturing, and the growth of agrochemical industries.

Demand for bromine derivatives is predicted to increase at 5.1% in India over the projected period. Initiatives taken by the government to bolster the manufacturing sector of the country are expected to augment the target market in the country.

Dibromo methane is used as a solvent for the production of several organic chemicals. The chemical is also used as an intermediate for the manufacturing of specialty chemicals, dyes, agricultural chemicals, and drugs & medicines. Growing demand for dimethyl chloride and other types of dibromo methane from established end-use industries will aid market expansion over the decade.

Which Application of Dibromo Alkane is Proving to Be Highly Beneficial for Market Participants?

Dibromo alkane covers a wide range of applications in several end-use industries owing to the coverage of various bromine derivatives. Rise in the demand for intermediates in the agrochemical and pharmaceutical sectors will boost the target market. The chemicals segment will remain a key application area for bromine derivatives with the chemical used in the production of gums, dyes, resins, waxes, etc.

Growing demand for gums, dyes, resins, and waxes has resulted in a consumption outlook of 4.7% CAGR for the period between 2022 and 2032. Rise in the demand for these products from industries such as paints & coatings, textiles, building & construction, and others will augment the consumption of dibromo alkane over the coming years.

Key manufacturers of dibromo alkane are focusing on the acquisition of medium-sized manufacturers to enhance their global presence and expand their consumer base across the world. Market players are further focusing on increasing their production capacity to boost their sales volumes by catering to the growing demand from key end-use industries. Key market players are also investing in strengthening their supply chain networks in untapped markets.

Some of the key developments witnessed in the market include:

Similarly, other key developments related to companies manufacturing dibromo alkane have been tracked by the team at Persistence Market Research, which are available in the full report.

What is the global valuation of the dibromo alkane market?

What are the key factors driving the demand for dibromo alkane?

Substantial demand for intermediates for agrochemical production, rising use of organic solvents in the pharmaceutical industry, and strong growth of the chemical sector remain key growth drivers for dibromo alkane suppliers.

What is the consumption outlook for dibromo alkane through 2032?

Worldwide consumption of dibromo alkane is projected to increase at a CAGR of 4.2% and reach a market value of US$ 687.7 Mn by 2032.

Which 5 countries account for the most demand for dibromo alkane?

China, the U.S., India, Germany, and Japan are key markets for dibromo alkane.

Which countries are prominent producers & exporters of dibromo alkane?

China, the U.S., and India are major producers & exporters of dibromo alkane.

Who are the key manufacturers of dibromo alkane?

How is the dibromo alkane market faring in Japan & S. Korea?

Together, Japan & S. Korea hold 6.4% share of the global market for dibromo alkane.

As per PMR's research study, the global liquid masterbatches market is forecasted to reach a figure of about US$ 11,600 Mn in 2022 end with a healthy CAGR.

Global decorative exterior materials industry value, and is projected to register a growth rate of around 5.7% during the projection period of 2021 to 2031..