Expanding at a CAGR of 5.8%, the global cognitive decline market is projected to increase from a valuation of US$ 2.1 Bn in 2020 to US$ 3.8 Bn by 2031. As per Persistence Market Research’s projections, Mild Cognitive Impairment (MCI) indication held a substantial share of over 78% in 2020 in the global market.

According to Persistence Market Research, cognitive decline market revenue accounted for 5.2% share of the global neurodegenerative disease market, valued at nearly US$ 40 Bn in 2021.

People suffering from major mental illnesses are becoming more engaged in their treatment and rehabilitation. Education on mental illness and treatment alternatives has emerged as a fundamental need in order to overcome obstacles to treatment in a way that supports recovery.

Patients who understand their treatment choices and participate cooperatively in the treatment process are more likely to engage in behaviors that help them manage their physical chronic diseases efficiently.

Growing awareness about cognitive decline symptoms among physicians echoes a healthy market outlook for cognitive decline treatment. Attaining accurate information is unswerving with recovery from severe mental illness in a number of ways.

Furthermore, digital health technologies, including application-based platforms as well as web-based therapies, are gradually being regarded as cost-effective as well as resource-effective solutions to offer health interventions to the general public. Digital health technology, when combined with face-to-face consultations and treatments, has the potential to thoroughly restructure the healthcare system.

Gamification is becoming a more popular trend in the field of digital health. Gamification is an emerging concept that focuses on using game elements in non-game environments to engage audiences to take respite from the monotony of work, all the while providing them with motivational and cognitive advantages. While many industries such as business, marketing, and e-learning have taken use of gamification's potential, the digital healthcare sphere is still at the precipice of nascent stages of adoption.

The cognitive decline market is expected to expand at a healthy growth rate over the next ten years at a CAGR of 5.8%. 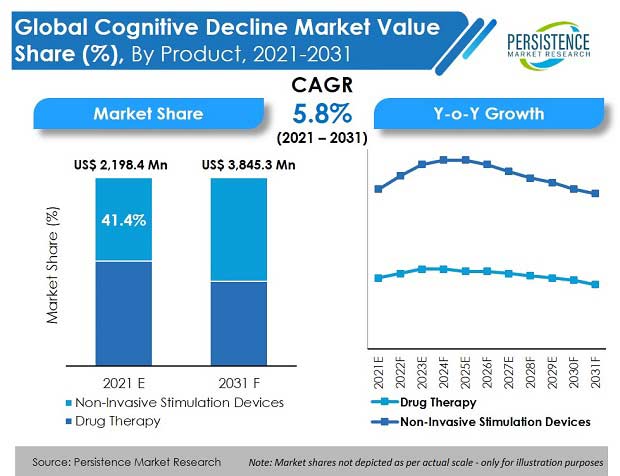 What Opportunities Lie Ahead for Cognitive Decline Drug Manufacturers?

Smartphones and tablets have made personal computing accessible to a diverse range of audiences, and there is growing interest in how these devices may be utilized in all aspects of our lives.

There has been an upsurge in the use of various machine learning algorithms to diagnose cognitive decline, most typically using imaging data for diagnosis and disease progression. This comprises PET imaging for amyloid, MR imaging, and PET/MR imaging.

Continuous monitoring using technology offers the ability to detect the progression of cognitive decline over time as well as provide alerts and assistance to patients in order to keep them productive.

Cognitive assistive technologies, for example, incorporate sensors with AI and machine learning in living spaces to build smart homes that can detect and analyse health and other occurrences. This technical progress has grown to meet the demands of dementia patients, informal (family) carers, formal (clinical) caregivers, and social (nonmedical) caregivers, resulting in tremendous opportunity for cognitive decline treatment providers.

Furthermore, increasing number of clinical trials being performed is a bright side for this market, driving its current efficiency over present treatment choices. A large number of research centers are conducting large-scale studies on cognitive decline. Several international research centers have presented their work in order to get better results. The main sources of R&D funding include both, government and private bodies.

What are the Factors Restraining Demand for Cognitive Decline Treatment?

Many drugs are available in the market for the treatment of cognitive decline; however, these drugs are associated with numerous side effects.

Patients taking these medications for a long period of time face numerous side effects such as bradycardia, nausea, vomiting, anorexia, weight loss, dizziness, diarrhoea, and insomnia. These side effects are associated with cognitive decline treatment drugs, ranging from mild to moderate in terms of severity, which is one of the major factors that hampers market growth.

There are no brain stimulation treatments that are completely free from side effects. The effects of surgical procedures such as Deep Brain Stimulation (DBS) are well-monitored and well-understood in terms of impacts, and are evaluated in terms of short-term and long-term effects.

While the safe limits for brain stimulation are well known, if necessary measures are not taken, there are still considerable risks of seizures from TMS and tCS, as well as scalp burns from tCS.

The "known unknowns" of brain stimulation, on the other hand, offer a greater risk: unexpected consequences resulting from the accumulation of stimulating effects in non-target areas or throughout several sessions.

Many businesses that provide brain stimulation insist on a minimum wait between sessions to minimise the effects, and this is one of the primary limitations of the cognitive decline therapy business.

Why is the U.S. the Largest Market for Cognitive Decline?

The U.S. cognitive decline market dominated the North American region with a market share of over 93.0% in 2020, and is projected to continue seeing high expansion through the forecast period.

Rising burden of cognitive impairment, increasing demand for non-invasive brain stimulation, and advancements in cognitive decline diagnosis are factors that present the U.S. as one of the major countries in the market.

Additionally, increased R&D activities and the presence of local and international players, which leads to better availability of products, are expected to fuel market growth.

How is the U.K. Cognitive Decline Market Faring?

The U.K. dominated the European market for cognitive decline with a share of over 25.7% in 2020.

The U.K. maintains significant funding for R&D, due to which, the quality of research has intensified, thus adding to the global manufacturing value of cognitive decline therapeutic drugs.

What is the Outlook for Japan Regarding Cognitive Decline Medications?

Japan is set to experience substantial growth in the market owing to the rising geriatric population, growing awareness of mental health, and increased technological advancements and digitization.

By treatment type, cognitive decline drug therapy projects lucrative growth at a CAGR of 3.4% through 2032.

Cognitive drug therapy treatment stimulates cognitive functional improvement and is a widely adopted method for the treatment of patients suffering from cognitive decline. In addition, ongoing clinical trials and prospective treatments in the pipeline are other reasons supporting segment growth.

Mild cognitive impairment held a revenue share of 78% in 2020. Prevalence of MCI has witnessed a significant rise over the last decade, and is majorly associated with the ageing process. Growing geriatric population around the globe is a major driver for the growth of the MCI segment.

Furthermore, segment growth is likely to be fuelled by continuous research to identify optimal and effective cognitive disorder treatment solutions.

The global cognitive decline market is marked by the presence of established as well emerging market players. These players are actively investing in significant research & development to develop novel therapies.

Companies manufacturing cognitive decline drugs market are strengthening their positions through collaborations and agreements with established as well as emerging market players.

How big is the cognitive decline market?

The global cognitive decline market is worth US$ 2.1 Bn and is set to expand 1.8X over the next ten years.

What is the sales forecast for cognitive decline treatment through 2031?

The cognitive decline treatment market is expected to reach US$ 3.8 Bn by the end of 2031.

What was the last 5 years’ market CAGR for cognitive decline?

What are the key trends shaping the cognitive decline industry?

Which are the top 5 countries driving demand for cognitive decline drugs?

What is the U.S. market outlook for cognitive decline?

At what percentage is demand for cognitive decline solutions expected to register growth in Europe?

Demand for cognitive decline treatment in Europe is expected to register growth at 5.5% CAGR over the next ten years.

What are the key market statistics for China and Japan?

The bariatric surgery devices market is anticipated to have a significant CAGR of 4.5% during the period of 2022-2032..

Global rare disease treatment market covers a detailed segmentation in which the segment is poised to grow at a moderate pace at US$ 56 bn market valuation by 2025 end.

Global Fluid Warmer Devices Market is projected to grow at a robust CAGR throughout the assessment to valuation of more than US$ 95 Mn by the end of assessment year 2026.

Global uveitis treatment market, which was estimated to represent more than 30% share of the total market in 2016 & is expected to expand at a CAGR of 7.3% by 2024 end.