Between 2017 and 2021, the use of architectural led products increased at a high CAGR of 8.6%, with the U.S., U.K., France, Germany, and Italy holding a major share in the global market.

Further, rapid infrastructure developments and construction activities across different parts of the world are expected to play a key role in positively impacting the sales growth of architectural LED devices.

Over the next ten years, worldwide sales of architectural LED products are expected to rise faster than in previous years at 13.1% CAGR. 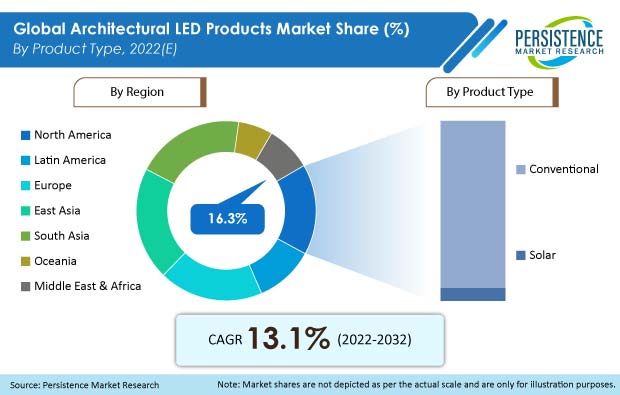 What are the Influencing Factors for the Architectural LED Products Industry?

As increasing consumption of electricity is turning into a vital issue, regional governments and concerned authorities are undertaking numerous efforts to control energy consumption in households and commercial sectors.

The U.S. Department of Energy, which actively addresses environmental, energy, and nuclear challenges, is one such authority that is aggressively promoting the ideology of efficient energy consumption. It has published numerous resources related to strategic energy management and continuous improvement, energy-efficient resource standards, industry coalitions and outreach, etc.

Such initiatives will only drive demand for LED systems, including architectural LED products, over the coming years.

For instance, Philips is one such brand that is investing heavily in the development of breakthrough innovations in smart lighting solutions to serve consumers better and build up brand reputation in the industry. As companies operating across different regions continue to invest and encourage research and development, growth in product sales is bound to take place.

Many of the low- and middle-income countries classified under non-OECD guidelines and think tanks are focusing on their economic advancement and expansion goals. Countries such as India, Malaysia, South Africa, Indonesia, Brazil, Chile, Vietnam, Thailand, etc., are a few of the most popular countries that are presently seeing huge investments in private and public sector developments.

This is one of the signs that demonstrate the demand potential for LED architectural products in leading non-OECD economies over the following few years.

Why is the U.S. a Significant Market for Architectural LED Products?

The U.S. Architectural LED products market is expected to dominate the North American region in 2022. The market in the U.S. is majorly dominated by the commercial sector.

One of the most prominent factors that are supporting regional growth is the rising demand for smart architectural lighting solutions with additional energy-efficient benefits. The adoption of a luxury lifestyle has further encouraged people to adopt smart solutions in their daily lives.

Furthermore, the U.S. is also one of the prominent markets for overall lighting solutions. High penetration of m-Commerce and e-Commerce has further played a significant role in facilitating market reach and adoption of architectural LED products in the country.

Aggressive initiatives undertaken by the U.S. Department of Energy for promoting efficient-energy lighting products in the commercial and household sectors are further projected to encourage the adoption of conventional and solar LED products such as strips and lamps for architectural uses.

Will Brazil Be a Lucrative Market for Architectural LED Lighting?

The Brazil architectural LED products market held 39.4% of the Latin American market share at the end of 2021 and is expected to expand at a prominent CAGR over the forecast period.

Thus, the efforts on the part of the government and other concerned authorities and organizations to promote infrastructure development are projected to open up new opportunities for architectural LED product suppliers in the market.

The Germany architectural LED products market is one of the most prominent in the European region; however, the country harbors a great deal of potentially untapped opportunities. This market is anticipated to exhibit a high CAGR of 9.7% during the forecast period.

The ability of market players in Germany to come up with fresh and new offerings and innovations is always perceived as an important factor for the success of any business. The influx of new offerings or fresh innovations in architectural LED products often helps gain an advantage in such a competitive environment. Innovation also helps create a point of difference among the offerings in the national market, thus gaining a competitive edge over others.

Which Product Category is Expected to Reflect High Growth?

Overall, growing consciousness of using energy-efficient products and government initiatives to promote energy conservation are expected to positively drive the growth and adoption of architectural LED products over the coming years.

“Demand in Commercial Sector Much More Than Residential Sector”

Expanding use of architectural LED products in different sectors such as retail, IT and telecommunications, banking, financial services & insurance, healthcare, media & entertainment, and others is a prominent factor why the demand for LED products is more in the commercial sector than the residential sector.

With the growth of LED products, suppliers of LED lighting solutions are focused on innovation and producing a higher return on investments across all product segments. Companies are also undertaking constant efforts to improve brand awareness in both, commercial and consumer niches.

In addition to these strategies, market players have also typically taken up acquisition procedures for the purpose of desirably adhering to changing industry environments with an aim to secure long-term profitability. One such brand is Philips.

How is the global architectural LED products market evolving?

What is the current size of the architectural LED systems market?

The global market for architectural LED products currently stands at US$ 12.57 Bn.

What is a key trend driving the sales of architectural LED products?

Increasing consumer inclination toward a luxurious lifestyle is expected to aid market expansion over the coming years.

Who are the top manufacturers of architectural LED products?

The tiki torches market is segmented on the basis of product, material, size, price range, sales channel, and region. .