During the historical period (2017-2021), demand for almond flour registered a compounded annual growth rate (CAGR) of 6.7%. Almond flour demand is surging as it offers health benefits that make it a vital component for naturally obtained healthy products to improve the health and well-being of consumers.

The global almond flour market is mainly benefitted from innovative product offerings by prominent dried fruit flour manufacturers and rising customer demand for nourishing bakery products. Almond flour is one of the most frequently used food ingredients in the food processing industry as well as in households.

Almond-based products such as flour are being utilized for innovative products in retail shelves. At this stage of the market, which is in the growth phase, almond flour processors are focusing on marketing and promotions, since this is very essential to raise consumer awareness. Many market players are also opting for educational marketing as consumers are still coming to terms with the health benefits of almond flour.

Overall, the global market for almond flour is expected to experience significant growth at a CAGR of 8.1% over the forecast period of 2022 to 2032. 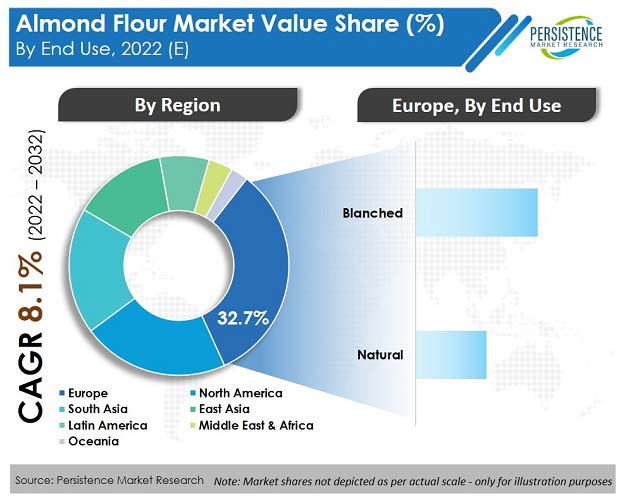 Which Factors are Responsible for Rising Demand for Almond Flour?

Demand for dried fruit flour types, such as almond flour, has witnessed exponential growth in the recent past, owing to increased consumer preference for 'better-for-you' options, and also because the popularity of paleo, gluten-free, and keto diets has skyrocketed. Research indicates that the global almond flour market is anticipated to witness significant growth as foods that include almond flour are becoming more mainstream, especially in developed markets of the U.S. and Europe.

Key players operating in the flour milling industry are emphasizing on offering healthier food items due to on-going consumer trends. They are investing huge amounts in technological developments in milling procedures to ensure that they deliver consistency in quality of almond flour products and reduce manual errors.

Key players are focusing on meet increasing consumer demand for almond flour by utilizing precision automation and technology, which includes advanced robotics, unmanned vehicles, and drones for efficient material. This helps avoid material losses due to improper handling and manual errors. This has helped key almond flour producers in boosting their production capacities.

“Rising Use in Food and Cosmetics & Personal Care Industry”

Almond is typically crushed into flour and can be used in various applications. Almond flour is highly used in the foodservice industry for the preparation of breads. It also proves to be a significant ingredient in different cooking applications, including preparation of muffins, sandwich breads, cakes, chocolates, noodles, and many others.

Global demand for almond flour is predicted to witness sustainable growth over the coming years owing to increased consumption of bakery products, sauces, packaged foods, confectionery, and dressings, and more. Rapid growth in the number of fast food restaurants is also expected to complement market expansion.

Almond flour is also increasingly being used in cosmetics and personal care formulations as a gentle exfoliation ingredient, which is also expected to fuel market growth over the decade.

Are There Any Limiting Growth Factors for the Almond Flour Market?

Almond flour is expensive and mostly affordable to high-end consumers. It is viewed as a highly premium product. This scenario is especially prominent in developing regions such as Asia. Hence, market growth remains limited to certain regions, and it may take a long time for the middle-class to even consider buying almond flour products.

Another factor that is preventing the almond flour industry from prospering is its lack of availability and awareness amongst consumers. Apart from developed countries, consumers from other nations do not have proper information about the almond flour benefits.

Which Countries are Depicting High Growth in the European Market?

The markets in Germany, Spain, and Italy are expected to expand at high CAGRs of 10.6%, 10.5%, and 9.4%, respectively, during the forecast period (2022-2032). Demand for almond flour is high in the European region due to high growth of the retail and foodservice industry, which is likely to have a positive impact on market growth over the decade.

Where in South Asia Should Almond Flour Suppliers Focus On?

“India to Be Profitable Market for Almond Flour Manufacturers”

In the South Asian market, India is showing promising growth for the forecast period, and is expected to register a significant CAGR of 8%. Demand for almond flour in India is rising due to growing awareness among consumers regarding the consumption of milk alternatives in food applications.

Market share of India in the South Asia almond flour market is around 46.3%, currently valued at over US$ 100 Mn.

Which End-use Sector Accounts for Most Consumption of Almond Flour?

Based on end use, almond flour is segmented into food and beverages, cosmetics and personal care, foodservice, and household/retail, in which, the food and beverage sector holds a major volume share in the global market.

Market volume share of almond flour is 46.1% at present in the F&B sector, which is projected to be valued at 802,069 tons by the end of forecast period in the global market.

Which Nature of Almond Flour is Showing Potential Growth?

However, demand for organic almond flour is rising rapidly across the world.

The global pandemic slowed down industrial and economic activities around the world, due to which, there was significant drop in demand for almond flour majorly due to lockdowns, several restrictions on travel and transport, and closure of retail outlets.

Top raw material-producing countries were widely affected by the spread of COVID-19 and announced lockdowns in order to counter the situation. Thus, manufacturers of almond flour faced a shortage of raw materials leading to reduced production.

However, change in the lifestyle of the consumers, increasing demand for almond flour as the situation improves, and high almond flour usage in the foodservice industry in nutritious and healthy food are all set to drive industry growth over the coming months and years.

Market players are involved in acquisitions and expansions as their crucial strategies to compete with competitors in the almond flour market. They are offering almond flour products with different nutritional content at various prices to make it easy for consumers to choose according to their requirements.

Almond Flour Market by End Use:

What is the expected growth rate of the almond flour market through 2032?

What is a key trend in this industry landscape?

The trend of grain-free flours is gaining immense popularity, as more and more consumers are turning toward gluten-free diets.

Which region dominates the global market for almond flour?

Which countries account for the most demand for almond flour?

Demand for blanched almond flour is expected to surge at a CAGR of 8.5% during the forecast period.

Who are the leading manufacturers of almond flour?

What is the market size of Australia in the Oceania region?

The Australia almond flour market is currently valued at US$ 26.3 Mn.

Global fruit powder market market value expected to reach US$ 83 Bn by the end of 2030, growing at a CAGR of close to 7% over the next ten years..

Global specialty sugars market has witnessed substantial growth over the past few years, and this trend is expected to continue through the course of the forecast period (2021 to 2031). .