North America is the leading revenue contributor to the global market for pulmonary fibrosis treatment. This is due to continuous development of innovative products by leading and emerging vendors in developed countries such as the U.S. and Canada. Pulmonary fibrosis causes shortness of breath initially, and with worsening lung condition, it makes breathing difficult without supportive care such as oxygen therapy or treatment drugs that slow down the progression of the disease.

Besides, idiopathic pulmonary fibrosis (IPF) is a progressive (non-reversible) disease that results in lung scarring, altering the lung’s normal functioning. The common signs and symptoms of pulmonary fibrosis are shortness of breath (i.e. dyspnea) and a stubborn nonproductive cough.

Incidence of IPF is rising and the disease is estimated to affect 3 million people globally (13 to 20 per 100,000 people). Considering the current pandemic scenario, global burden of fibrotic lung disease is expected to rise largely as a result of SARS-CoV-2/COVID-19. This can be primarily attributed to long-term exposure of patients to mechanical ventilation. 81% patients are aged more than 40 years with pulmonary fibrosis, as per the Pulmonary Fibrosis Foundation.

In its latest revised study, ESOMAR-certified market research and consulting firm Persistence Market Research offers insights about key factors driving demand for pulmonary fibrosis treatment. The report tracks the market in 20+ high-growth countries, along with analyzing the impact COVID-19 has had on the market overall.

For instance, in 2019, The Pulmonary Fibrosis Foundation (PFF) announced the launch of PRECISIONS, a research aimed to support precision medicine for IPF. This new technology will enable scientists to isolate and examine specific genetic and molecular levels, thus creating novel therapies for IPF patients. This ongoing research study has received a grant of US$ 22 million from the National Institute of the Health (NIH) and Three Lake Partners, a philanthropic family organization

Increasing innovation in the field of pulmonary fibrosis and great acceptance of such innovations by patients will aid market expansion. This will create opportunities for the expansion of the pulmonary fibrosis treatment market size over the forecast period, which is projected to increase at a CAGR of over 6% through 2031.

What is the Impact of Orphan Drugson Pulmonary Fibrosis Treatment?

How Will Rising Prevalence of IPF Aid Market Growth?

The number of people smoking is increasing at a rapid pace across the world. As per the World Health Organization (WHO), in 2018, more than 1 billion people smoked tobacco around the world. Smoking is linked to higher chances of developing pulmonary fibrosis, and is also responsible for worsening of the disease. The probability of developing pulmonary fibrosis is higher in smokers or ex-smokers as compared to persons who never smoked.

For instance, as per the Centers for Disease Control and Prevention, more than 14% (~34.5 million) adults in the U.S. smoked tobacco as of 2019, and more than 6.9 million adults smoked tobacco in the U.K. These factors are often considered responsible for increase in morbidity and mortality due to pulmonary diseases. 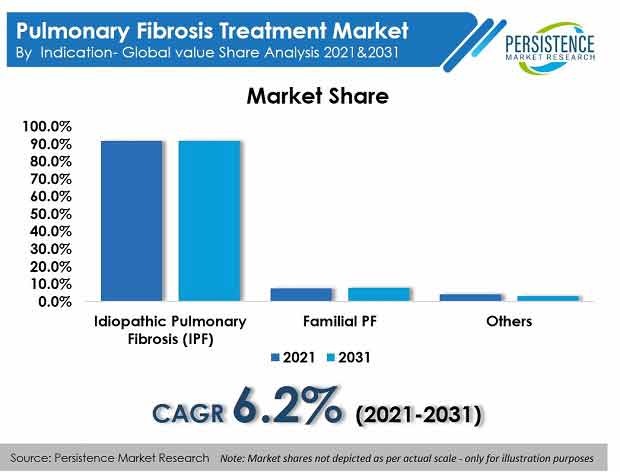 For instance, as per the Department of Respiratory Medicine, Herlev and Gentofte Hospital, Kildegardsvej, more than 41% of pulmonary fibrosis cases are misdiagnosed. A series of tests are required to diagnose pulmonary fibrosis, such as Pulmonary Function Tests (PFTs) or Lung Function Tests, six-minute walk test, and Aahigh-resolution CT scan (HRCT). Even with these tests, diagnosis is not confirmed, and biopsy is also carried out often.

How are Technological Innovations Creating Scope for Expansion in the U.S.?

Technological innovations in pulmonary fibrosis treatment have amplified the scope of innovative medication in the field of pulmonary fibrosis. Technological advancements play a very important role in the U.S. market. Apart from traditional off-label corticosteroid treatment options, drugs such as Offer (nintedanib) by Boehringer Ingelheim Pharmaceuticals, Inc. and Esbriet (Pirfenidone) by Genentech Inc. received marketing approval in 2014, changing the dynamics of the market in the country.

Why Is Demand for Pulmonary Fibrosis Treatment Surging across the U.K?

Rising old population is being seen in developed countries such as the U.K. and the age group above 60 is more prone to pulmonary disorders. Large number of old patients are hospitalized due to respiratory problems, mostly in Western European countries. Moreover, market players are entering into collaborations with leading organizations such as the National Institutes of Health to gain significant clinical evidence for their products.

How are Market Consolidation Activities Influencing the Market in Japan?

Per capita spending on healthcare is increasing, globally. People’s desire and ability to spend on wellness has led to an incremental shift in pharmaceutical expenditure. Also, global per capita healthcare spending has almost doubled over the past few years, especially in countries such as Japan.

Rapid economic growth and growing disposable income are factors that can be attributed to the growth of overall healthcare industry. Increasing pharmaceutical spending is expected to result in rising demand for advanced drugs/therapies for pulmonary fibrosis, which, in turn, will create high growth opportunities for market players over the forecast period.

Why are Middle-income Countries Such as India Showing Positive Growth?

It has been observed that the middle-income population is having less awareness regarding pulmonary fibrosis and as such the disease is diagnosed late and the severity is increased. Prevalence of smoking has increasing in developed as well as developing countries.

As per WHO, prevalence of smoking is higher in countries with upper-middle income as compared to high-income countries. This creates a better opportunities for pharma players to increase their revenues from developing countries such as India.

Why is Monotherapy Witnessing High Demand?

Monotherapy is a single drug that is given at one time, and has less side effects on the body. Single therapy medicines are more accepted by patients across the world. As such, this segment is expected to flourish and expand at a CAGR of over 6% through 2031.

Incidence of IPF is rising, and the disease is estimated to affect 3 million people, globally. However, there is no accurate statistics reported for the exact incidence and prevalence rate. Significant prevalence of idiopathic pulmonary disorder is observed in the United States, Europe, and the Middle East as compared to the Asian continent.

Unique growth factors have been analyzed in detail, while a comprehensive assessment of some of the key challenges for commercial aquaculture vaccines have also been discussed..

Flavors Into Over The Counter Otc Pharmaceuticals Market

Over the forecast period 2017-2025, the global market for atrophic scar treatment will reportedly grow at a CAGR of 4.6% along with a healthy revenue. More details.