People carry their phones with them pretty much constantly throughout the day and keep them beside their beds all over the night. Mobile phones are estimated to create significant opportunity to increase programmatic spending. As the mobile market grows, mobile advertising will be used on a wider scale and there is a greater demand for more sophisticated technology. Mobile is getting closer to replacing desktops as ‘the first screen’ programmatic technology confidently making its way to mobile phones. The emergence of new ways and tools to monitor and measure relevant data on mobile devices is affecting bright prospects for programmatic mobile video. For example, Facebook is currently playing a significant role in the rise of mobile programmatic.

Almost every industry sector in the North America region is striving on digitalization by adopting digital technologies and devices for innovation in business processes and revenue producing opportunities. This adoption of digital devices by clients and their customers to share data with one another creates a platform for programmatic advertising and results in overall growth of this market.

The rising popularity of social media services is playing a significant role in programmatic advertising. Almost all the major social platforms are now offering programmatic advertising options. Programmatic brings various benefits through social media channels as the marketers run more effective campaigns through automated buying and by reaching a precise audience with highly relevant messages through social media. For example, Red Bull is targeting videos through the Twitter feeds of people who have viewed extreme sports sites. The platform enables marketers to bid on influencer ads programmatically in real time and buy influencers’ branded content on their social media pages, blog pages, and websites. 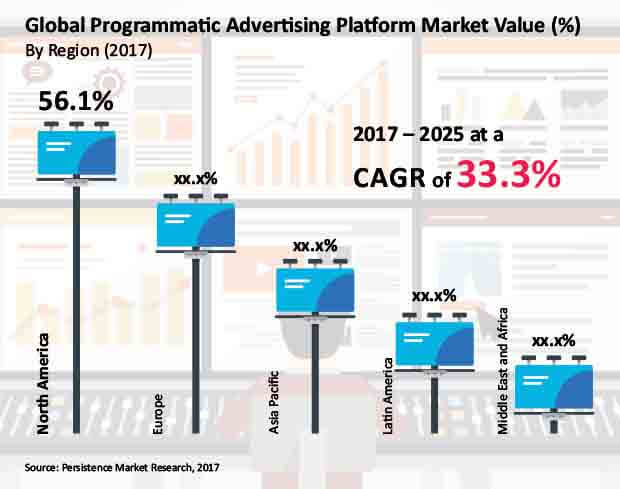 The programmatic advertising platform market is growing swiftly due to increasing usage of private marketplace. Over the last few years it has really surged. The major reason for this kind of development is the increasing usage of mobile and social media platforms. We can also call it as the next big thing in the future of online advertising.”

Overall market size has been analyzed through historical data, primary responses, and public domain data. Revenue of companies in the programmatic advertising platform market has been benchmarked to ascertain the market size for the base year. Macroeconomic indicators such as GDP and industry growth have been considered to forecast the market size over the assessment period. The historical growth trend of end-use industries, market participants’ performance, as well as the present macro-economic outlook has been taken into consideration for estimating the overall market trend forecast. This data is then validated using the triangulation method and is extensively scrutinized using advanced tools to garner quantitative and qualitative insights into the global programmatic advertising platform market.