Outdoor LEDs enable energy saving more than 50% compared to predecessor technologies such as LCD and plasma, thereby helping curb carbon emissions. Moreover, as the backlight source of LED display is composed of semiconductors, it does contain any gas or filament thus improving the durability of the display.

In recent years, rising number of sports and musical events is another key factor stoking the demand for outdoor LED displays. Sports arenas and open air venues are most ideal locations for companies to carry out branding and promotion campaigns.

Sport spectacles such as Olympics and high profile musical concerts are broadcast via television that are viewed by millions of viewers. This increases the demand for LED advertising boards/displays such as LED perimeter displays, LED scoreboards, and stadium screens on television. For instance, 12 stadiums used for FIFA World Cup 2014 with an average seating capacity of over 45,000 deployed LED displays. The screens were used not only for the display of event related information such as scores but also for advertising purposes. Large sportswear companies such as Nike and Adidas showcased their latest sports gear and sports equipment reaching out to millions of audience in a single go.

Apart from this, rising number of modern construction projects such as shopping malls and multiplexes deploy LED displays such as LED display matrix, LED billboards, and LED video walls.

The LED displays used in these commercial spaces are mainly for advertising purpose that are attractive to consumers. The large screen that displays content with flashy colors and thunderous sound grabs attention of visitors to view the message. Most multiplexes are deploying high definition LED screens to display videos and movies as a part of paid advertisements for their clients.

The increasing number of promotional activities of business firms and corporate organizations is also aiding the growth of outdoor LED display market. Most corporate organizations, companies, business firms, and brands showcase themselves to enhance their visibility. Some of these advertising activities involve showcasing on billboards and LED screens on streets and malls. Consumer goods brands, for instance, advertise their products through LED billboards at crowded locations such as bus stations and railway stations, thus further aiding the growth of the outdoor LED display market.

Considering a number of favorable factors driving the installation of LED displays, the global outdoor LED display (installed) market is likely to clock a phenomenal 88.0% CAGR for the forecast period between 2017 and 2021. 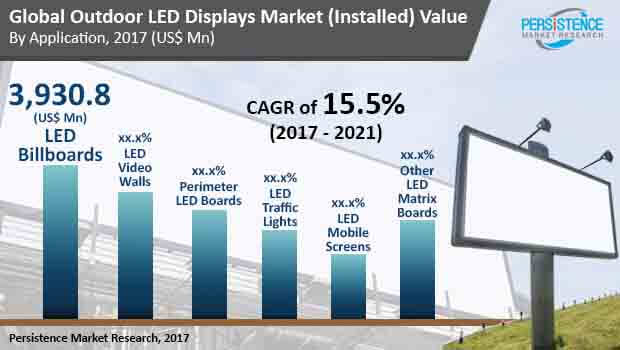 On the downside, high initial cost of LED displays is slowing the growth of outdoor LED display market. As installation of LED display is very expensive as compared to conventional displays such as textual banners and printed hoardings, consumers are increasingly opting to rent the equipment.

Global Consumer Data Storage Devices market is expected to register a CAGR of 3.3% and a healthy revenue status during the forecast period of 2017 – 2025.