A new report by Persistence Market Research details trends in 20+ high growth markets, along with the impact the COVID-19 pandemic has had on the healthcare industry in general, and on the demand for metastatic melanoma cancer diagnostics in particular.

This edition (2021-2031) brings readers up-to-date with key market developments, providing analysis on how manufacturers and other stakeholders are reacting to change. The study expands on the competitive landscape section, and readers will get to know the key strategies of established players as well as new entrants in the market.

Metastatic melanoma stands 19th in the list of most commonly occurring cancers in men and women, worldwide. According to the American Cancer Society report 2021, estimated new yearly cases are around 1.5 Mn and estimated death rate is around 0.7 Mn.

Diagnosis or detection is composed of identifying the cancer cells precancerous lesion in the body of a metastatic melanoma cancer patient. Unfortunately, early diagnosis was not available for melanoma cancer, which induced worldwide research & development of the same.

According to the Indian Journal of Cancer, metastatic melanoma is diagnosed only 3% as compared to 75% in emerging countries with skin cancer-related death. At the same time, a high incidence rate of skin cancer is seen in the Asia Pacific region, such as in Australia.

According to Persistence Market Research’s analysis, the metastatic melanoma cancer diagnostics market is projected to progress at a CAGR of close to 8% from 2021 to 2031.

People with a family history of melanoma are likely to have a 2.2% more risk of developing melanoma cancer. The above 65 age group is more at risk. Additionally, people with sunburns have 5% or more chances of getting diagnosed with melanoma. In the U.S., more than 9,500 people are diagnosed with metastatic melanoma every day, and more than two people die of the disease every hour.

According to the National Cancer Institute, 5 years relative survival rate is around 93%. Most patients who are exposed to UVB rays are more prone to skin cancer. Melanoma is diagnosed in 4% of the cases when it spreads to distal parts of the body. Increasing cases of metastatic melanoma disorders and rising awareness for diagnostics are expected to drive market expansion over the coming years.

What is the impact of Increasing Development in Metastatic Melanoma Cancer Diagnostics?

Miniaturization of ultrasound metastatic melanoma imaging systems, computed tomography [CT] scans, and PET-CT scans, has made it conceivable to pack expanding measures of handling units into smaller restorative devices. One critical improvement has been the commercialization of handheld ultrasound devices by manufacturers, with cutting-edge computational power.

This trend has been embraced by more diagnostic OEMs with convenient, handheld ultrasound systems. Introduction of new technologies by manufacturers is expected to increase demand for cancer imaging systems from end users.

What are the Opportunities Expected for Metastatic Melanoma Cancer Diagnostic Providers?

Awareness and screening of cancer have increased over the last couple of decades, resulting in early diagnosis of cancer. However, the ultimate goal of reducing the rate of late-stage disease and mortality has not been achieved. This is mainly due to ineffective methods of screening, which often give false-positive and false-negative results. Innovative diagnostics tests to cater to these requirements will lead to fast adoption among physicians and patients.

Will Lack of Skilled Professionals and High Cost of Equipment Restrain Market Expansion?

High cost of medical imaging equipment is the biggest limiting factor market growth. Computed tomography [CT] scans and PET-CT scans are extremely costly. Along with equipment cost, there is a huge amount of spending on the infrastructure of a diagnostic room, especially in developing countries. Due to high cost of the equipment, there is high cost of services as well, which makes it inaccessible for most patients in many countries.

While comparing the cost of metastatic melanoma cancer diagnostics with the incomes in low- and medium-income countries, there exists a huge economic burden on the population, thus restraining market growth in these regions. Due to this reason, national healthcare authorities in various countries also face challenges to provide efficient and high-quality cancer care at a reasonable cost.

Along with this, customers in low- and medium-income countries are also price-sensitive, and cannot bear very high equipment cost. Furthermore, low funding toward operational costs and limited manpower at these facilities are factors that are likely to restrain market growth in a number of developing nations. 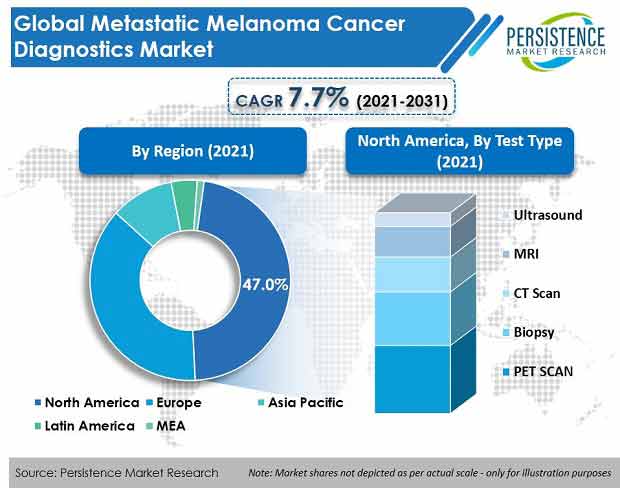 In the U.S. a Lucrative Market for Metastatic Melanoma Cancer Diagnostics?

Rising prevalence of metastatic melanoma cancer in the U.S. is likely to boost demand for cancer diagnostics. According to the American Cancer Society's report, it is estimated that around 106,110 new melanoma cases will be diagnosed in the United States in 2021, and around 7,180 people are predicted to die due to the same.

Moreover, the U.S. is considered as the largest market for medical devices in the world, which invariably makes it profitable for cancer diagnostics. As per Select USA, the medical devices market in the U.S. is expected to reach US$ 203 billion in valuation by 2023.

Favourable healthcare policies together with high per capita healthcare expenditure has formed a favourable environment for the adoption of advanced cancer diagnostic technologies in the country. Moreover, product launches and strategic agreements will continue supporting overall growth in the U.S. The market in the U.S. is expected to expand at a CAGR of close to8% during the estimated time frame.

Which Factors are Hampering Market Growth in South Africa?

Other factors responsible for limitation of metastatic melanoma cancer diagnostic services in South Africa are government’s failure to provide proper screening, high financial burden, and inadequate diagnosis facilities for cancer. The market in South Africa is expected to witness sluggish growth with a revenue share of around 29% in the MEA region at the end of 2031.

Why is Adoption of Metastatic Melanoma Cancer Diagnostics Surging across Australia & New Zealand?

Market growth in Oceania is expected to take place at a faster pace. According to the World Health Organization report of 2020, metastatic melanoma is the most common type of cancer in Australia and New Zealand among men and women. According to GLOBOCAN 2020, 111 patients per 100,000 were diagnosed with melanoma skin cancer in Australia and New Zealand in 2020.

Most of the population in Australia and New Zealand is light? skinned, and excessive sun exposure is prevalent, in combination with augmented detection of the disease. Thus, metastatic melanoma cancer is the leading type of cancer in these countries.

Why are PET Scan Tests Immensely Popular across Regions?

Adoption of Positron Emission Tomography (PET) scanning is increasing globally. These advanced technologies shorten acquisition time and provide accurate attenuation correction and fusion imaging, leading to an increase in diagnostic sensitivity and specificity. In a PET scan (positron emission tomography test), a patient is injected with a small amount of radioactive glucose substance.

Quick-growing cancer cells absorb glucose, which helps 'light up' the cancer cells. The PET scan detects these radioactive areas in the patient’s body and takes pictures. A PET scanning procedure requires around 15 to 60 minutes. Thus, PET scan tests hold a larger share in the market.

What Makes Pathology Laboratories Hold a High Share in the Market for Metastatic Melanoma Cancer Diagnostics?

Similarly, it has brought improved cost-effectiveness for different treatment and diagnostic administrations, which has encouraged more individuals to receive approaches for their cancer screening. This has driven the market share of pathology laboratories in this industry.

The increasing burden of incurable and rare diseases has resulted in an unmet need for multi-modal imaging techniques, which aid in understanding the mechanism of disease progression. The demand from researchers for newly available modalities is increasing the installation of pet mri in research institutes..

Global Chromatography Systems Market estimated to surge at a value CAGR of 6.7% to reach a market valuation of US$ 2.4 Bn by the end of 2032.

The Multiplex Detection Immunoassay Market is likely to have a moderate CAGR of 4.2% over the forecast period 2022 -2024.