Lime is a high volume-low cost commodity mineral that is produced from limestone and mainly used as a chemical additive. Lime comprises several compounds of calcium and is primarily alkaline in nature. The production of lime involves several processes such as crushing, pulverizing, heating and hydrating. The process differs according to the desired product and application. The processing of raw limestone to form lime is called a lime cycle. Basically, there are two types of lime available in the market, i.e. quicklime and hydrated lime, and both are used across several applications including cement manufacturing, metal processing, agrochemicals and pulp and paper processing, among others.

Rising demand from the mining & metallurgical application, especially for impurity removal, is a key driving factor for the growth of the lime market across the globe

According to the International Organizing Committee for the World Mining Congresses, there has been significant growth in the production of minerals across the globe in the recent past. This can be mainly attributed to the increasing demand for ferrous and non-ferrous metals from several end-use industries such as automotive, construction, shipping and fabrication, among others as lime is mainly used to eliminate impurities during the manufacturing process of iron, steel, alumina, gold, silver, copper and lead, among other metals. Attributing to developments in the metal industry, the demand for lime is anticipated to surge and the market is forecast to register healthy growth in the coming years. Another key factor that impacts the demand for lime is its increasing use in the manufacturing of precipitated calcium carbonate. Precipitated calcium carbonate, owing to its high calcium content, is widely used in the production of paper, plastics, paints, rubber, calcium-based antacid tablets and multi-vitamin/mineral tablets, among others. Thus, this increase in the use of precipitated calcium carbonate, especially in polymer, paper and healthcare industries, is estimated to provide impetus to the growth of the lime market.

On the other hand, the increasing importance of lime alternatives such as limestone and magnesium hydroxide calcined gypsum is expected to impede the growth of the lime market. Along with this, less storage time is a major challenge faced by manufacturers in the lime market as the physical and chemical characteristics of lime change when it is stored for more than six months. This can be attributed to the absorption of moisture and presence of carbon dioxide in the atmosphere, which make lime incompatible for use. Moreover, growing infrastructural development, coupled with rapid urbanization in developing regions, drives the global construction material market. This, in turn, is expected to surge the use of lime in cement for mortar and plaster formation. 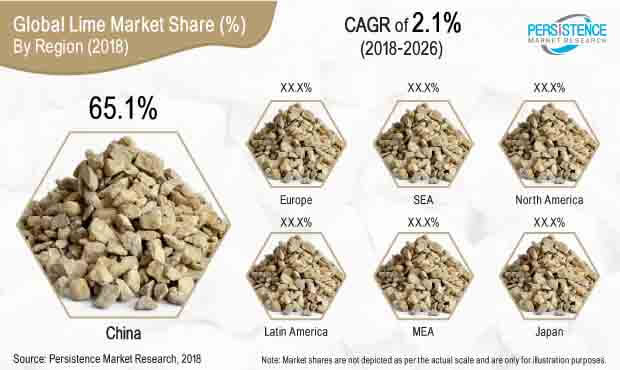 Persistence Market Research analyzes the global lime market in its new publication titled “Lime Market: Global Industry Analysis 2013–2017 and Forecast 2018–2026”. This study provides comprehensive analysis and fetches key information on the target market on the basis of product type, application and region for the historical period 2013–2017 and forecast period 2018–2026. The objective of the report is to identify dynamics in the lime market and provide insights pertaining to the various segments of the global lime market. To provide a better understanding and support stakeholders for decision making and market analysis, the report is incorporated with the analysis of drivers, restraints and trends that influence the current market scenario and are expected to impact the global lime market over the forecast period. The study provides data for 2017 along with an inclusive market forecast for the period 2018 – 2026.

The report starts with the market overview and provides market definition and taxonomy along with value chain, drivers, supply-demand scenario & pricing analysis. The sections that follow include the global lime market analysis by product type, application and regional/country level analysis. All the above sections evaluate the market on the basis of various factors affecting the market. Each section discusses the qualitative and quantitative aspects of the global lime market. To give a brief idea about revenue opportunities from the end-use, delivery form and region/country-wise segments, the report also provides market value (US$ Mn) data, growth rates, market shares and total incremental $ opportunity indices for each segment over the forecast period (2018-2028).

In the final section of the report, we have provided a detailed competition landscape with company market share and performance in order to provide report audiences with a dashboard view of key players operating in the global lime market along with their business strategies. This enables clients to assess strategies deployed by market leaders and help them develop effective strategies accordingly.

To ascertain market size, various viewpoints based on primary and secondary research have been considered. Based on them, data points such as regional and market split by different type of lime and application, along with qualitative insights from industry experts have been taken into consideration to arrive at suitable market estimates. The forecast presented in the report assesses the actual revenue generated and the expected revenue in the lime market over the forecast period.

The report begins with the market sizing for the estimated year, which forms the basis for forecasting. PMR has triangulated supply side and demand side data and the dynamics of the global lime market. For the same, data pertaining to lime production, import, export and consumption across the globe has been collected from several organizations, trade partners, industrial associations, company annual reports_bk_01_01_2020 and presentations, among others.

Quantifying the lime market across segments and target regions is more a matter of quantifying expectations and ascertaining opportunities rather than rationalizing them at the end of the forecast period. In an ever-fluctuating economy, PMR not only conducts forecasts in terms of CAGR but also assesses on the basis of key parameters such as year-on-year (Y-o-Y) growth to comprehend the predictability of the market and identify growth opportunities for players. However, from a business development perspective, it is essential to identify that market attractiveness in terms of three indices viz. market share index, CAGR index and incremental $ opportunity index. Moreover, the market attractiveness index is imperative to understand the key segments in terms of their performance and growth in the global lime market. This market attractiveness index helps clients identify real market opportunities in the global lime market.