Global Market Study on Large Format Displays: LED Backlit Segment Projected to be the Most Attractive Backlight Technology Through 2027

From an estimated market valuation of about US$ 9.5 Bn in 2017, the LED Backlit segment is expected to reach a market value of more than US$ 20 Bn by 2027, registering a CAGR of 8.1% over the forecast period. In terms of value, the CCFL segment is expected to increase 1.2X during the forecast period. The LED Backlit segment is projected to register high Y-o-Y growth rates throughout the period of study. 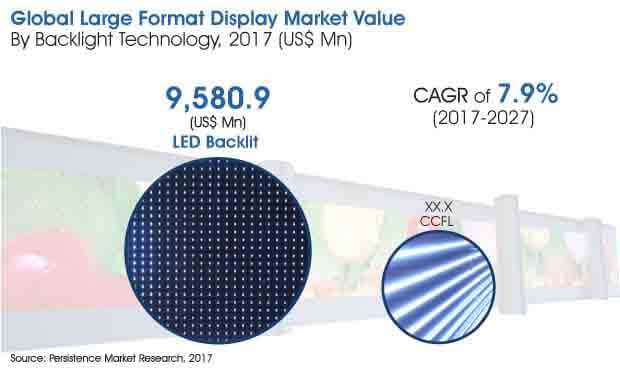 Augmented viewing technology with both portrait and landscape modes: With advancements in technology, a transition in viewing orientation is being observed as consumers demand displays that can provide both landscape and portrait viewing orientation. Top market vendors have started introducing large format displays that can be installed in such a way so as to facilitate both landscape and portrait views.

Global electronic locks market report has been prepared with the help of critical metrics such as CAGR, absolute and incremental dollar opportunity, and Y-o-Y growth rate.