Global Market Study on Chromatographic Silica Resins: Asia Pacific Projected to Depict High Growth as Compared to Other Regions During 2017–2025

Global sales of chromatographic silica resin is estimated to be valued at more than US$ 80 Mn by 2017 end and is expected to increase to more than US$ 110 Mn by 2025, representing incremental opportunity of more than US$ 30 Mn between 2017 and 2025. Global sales revenue of chromatographic silica resin is projected to exhibit a CAGR of 4.1% during the forecast period. In terms of regional markets, North America is estimated to be the major market accounting for over 40% of the total market share, whereas Asia Pacific is projected to be a high growth market over the forecast period.

There is a growing problem of adulteration of hazardous ingredients and cheap substitutes in food items. However, in order to ensure the good quality and consistency of food products, clinical trials are conducted during the development of new food products as well as during existing batch production of food products. Chromatography is an important method in checking adulteration in food products. In the food industry, chromatography is widely used in a number of applications such as vitamin separation, sugar content analysis, triglyceride determination, determination of nutritional quality of food, spoilage detection, analysis of amino acids, colorants and residues, detection of aflatoxins in food products and many more. Hence, the use of chromatographic silica resin in the food industry is expected to witness a steady growth owing to a pulsating food industry in countries such as India.

Activated alumina is famous for its superiority in separation and purification techniques. Due to the atmospheric properties of alumina, it can be used with neutral, acidic and basic compounds as well. On the other hand, silica gel can only be used in limited end use industries whereas alumina, being a superior ingredient, is used for environmental cleanup and in many other applications such as biohazard, bioterrorism, gas and liquid dehydration applications. Due to its versatile applications at a relatively lower cost, alumina resins are a preferred choice over silica resins. These factors may restrict the growth of the chromatographic silica resin market during the assessment period.

North America region is expected to emerge as a relatively attractive market in terms of incremental dollar opportunity by the end of forecast period. Asia Pacific is expected to grow at a significant CAGR as compared to other regions. Increasing demand for chromatography from end-use industries as a result of economic growth, especially in emerging markets such as China and India drives the APAC chromatographic silica resin market. In terms of market value, the Europe chromatographic silica resin market is estimated to account for 31.5% share by 2017 end, whereas Latin America will account for 5.7% share. 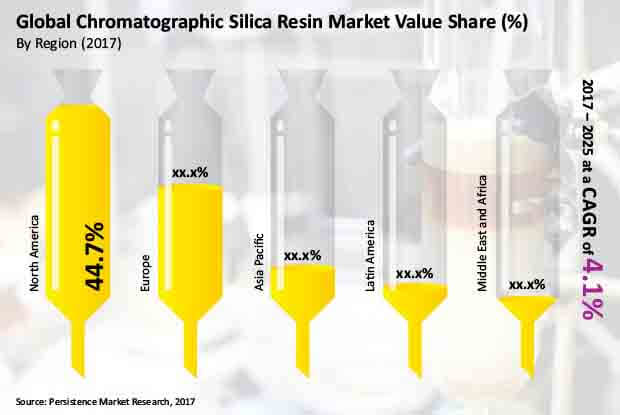 Last but not the least, there is an entire section of the report devoted to the competition landscape of the global chromatographic silica resin market. This competition landscape gives a dashboard view of the key companies operating in the global chromatographic silica resin market along with their important information and broad strategy adopted to stay as leaders in the global chromatographic silica resin market. Each of the leading companies is also profiled individually and important information about the company such as company details, company description, product portfolio along with key developments concerning the company and strategic analysis is presented. A SWOT analysis of each leading market player is also presented, which gives detailed information about the strengths, weakness, opportunities and threats that the company is dealing with. This competition landscape is the most important section of the report as it imparts a deep understanding of the leading companies operating in the global chromatographic silica resin market and is valuable for new entrants in the field to get a learning about how the companies are leading this lucrative market and also for established market players in order to get a better understanding about their competitors.

Overall market size has been analyzed through historical data, primary responses, and public domain data. Revenue of companies in the chromatographic silica resin market has been benchmarked to ascertain the market size for the base year. Macroeconomic indicators such as GDP and industry growth have been considered to forecast the market size over the forecast period. The historical growth trend of end-use industries, market participants’ performance, as well as the present macro-economic outlook has been taken into consideration for estimating the overall market trend forecast. This data is then validated with the help of the triangulation method and is extensively scrutinized using advanced tools to garner quantitative and qualitative insights into the global chromatographic silica resin market.